Martin Linge, actor and military officer, was killed during the British-Norwegian raid on Måløy on 27 December, 1941. He was buried with German military honours on the churchyard in Måløy on 4 January, 1942. In 1945, his grave was moved to Oslo. In all there are three Martin Linge memorials: on his grave, in the village of Sunnmøre where he was born and grew up, and in Måløy. 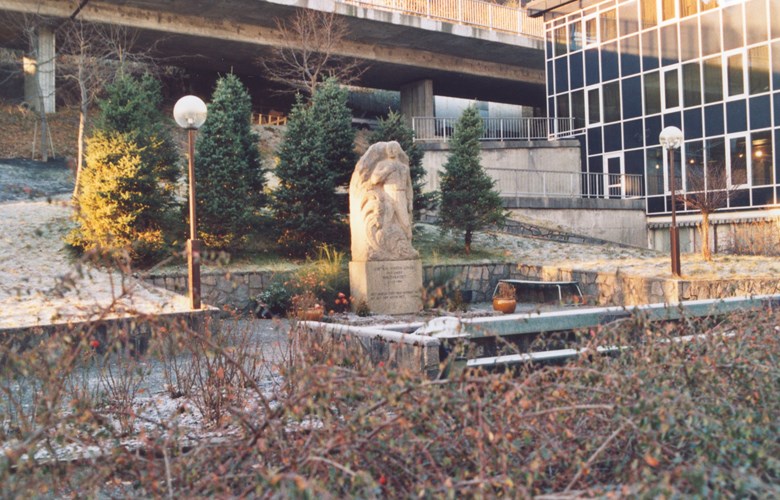 The Linge memorial by the Linge Hotel in the southern part of Måløy. It was provisionally erected at the old people's home further north, pending the regulation and preparation of its present site.

At the break of dawn on 27 December, 1941, combined British-Norwegian forces launched an attack Operation Archery) on Måløy. The object was to fight down the German forces stationed there, destroy the German cannon positions, as well as destroying industrial facilities that might be useful to the German occupation forces. The Germans were caught off guard, and suffered a humiliating defeat. Most of the approximately 300-men-strong German contingent were either killed or taken prisoners. The British-Norwegian losses were minimal, but the commanding officer of the Norwegian unit, Captain Martin Linge, lost his life. No civilians were killed.

LINGE, MARTIN, captain, Oslo. Born 11 December, 1894, in Norddal [county of Møre og Romsdal], son of Jens Linge, b. 1844, d. 1922, and Gunhild, née Tafjord, b. 1860, d. 1944. Married 1917 in Trondheim to Margit Vogt, b. 1897. Two children. Secondary school, Officer Candidate School, actor. Took part in the war in Norway as a communications officer in the battle in Romsdalen in 1940. Left for England where he built up a special Norwegian army detachment. The company was named after him. During a raid on Måløy, he lost his life when he rushed into a house full of German officers. Buried in Oslo. References in Knut Wigert's book "Landflyktig", and in the newspaper Aftenposten of 7 July, 1948.

Immediately after the liberation, "Måløy Vel" ( a residents" association) started their work to raise a memorial. However, the work was put aside when a memorial was raised in Linge's home village of Valldal in Sunnmøre, and unveiled by Crown Prince Olav in June, 1946.

A year later, the Måløy Youth Association resumed the memorial work, appointed a committee, and started raising money. In 1963, three members were added to the committee, chosen by the municipal council of Sør-Vågsøy. Thorleif Iversen chaired the committee.

The committee contacted the sculptor Ståle Kyllingstad who accepted the commission. On Sunday, 21 August, 1966, 25 years after the Måløy raid, everything was ready for the unveiling ceremony.

The artist on Martin Linge and the momument

In June, 1966, Ståle Kyllingstad came to Måløy to meet the committee and look at the planned location of the monument. The local newspaper "Fjordenes Tidende" made an interview with him. He was asked questions about his personal knowledge of Martin Linge, and also about what he wanted to express in his memorial.

"Yes, I got to know him from the time I frequented "Det Norske Teateret" (The Norwegian Theatre in Oslo). I learned to know him as an idealist and a driving force, and this is also why he went into war to fight for his country. [..] Working with the monument I have tried to express the idealist aspect in him by using a line from the Norwegian poet Anders Hovden as a motto: "Mitt alt det som heiter mitt" (literally: My everything that is called mine") [from the poem "Landkjenning" (Landfall)].

He [Martin Linge] rides on the crest of a wave from the west. He is bareheaded; he went into action without any visor. One hand is clenched to his side, whereas the other is lifted to his chest as if to say: "You may capture me, but not what is mine".

At 10.30 a.m. on Sunday, 21 August, 1966, the royal yacht "Norge" anchored up in the Måløy harbour. Never before had so many people convened in Måløy. A crowd of between six and seven thousand people turned up to see King Olav V go ashore. On the quay he was met by representatives from the county, the municipality, the armed forces and the police. The King was given a bouquet by eight-year-old Inger Osmundsvaag, daughter of one of the members of the Linge Company.

The King and his entourage then drove south to the Home Front House at Sæternes and the site of Ulvesund Hotel where Martin Linge lost his life. Rear admiral Brådland and lieutenant-colonel Riisnes, who both took part in the Måløy raid, briefed the guests.

After a memorial service in the Sør-Vågsøy church, where the seamen's minister Leif Aagard officiated, people assembled for the unveiling ceremony.

The unveiling ceremony was started with the royal anthem, accompanied by the Måløy Musikklag (Brass Band). The actor Knut Wigert, who also took part in the Måløy raid, recited Nordahl Grieg's poem "Martin Linge". HM the King then unveiled the memorial. The King said that he was glad to be present at this important occasion. - We are gathered here today to pay tribute to the memory of one of our country's great sons. The King spoke about the Linge Company, and pointed out Linge's efforts as a leader, his strong will and resolution. - We are all indebted to Martin Linge, King Olav V said.

The chairman of the memorial committee then handed over the memorial to the municipality of Vågsøy, represented by mayor Wåge. He expressed his hope that the Linge memorial would remain standing forever and serve as a rallying point for freedom and peace.

Mixed reactions to the raids

The raid on Måløy was but one of many raids along the Norwegian coastline in 1941, the year when Hitler Germany was at its strongest. The USA had not yet entered the war, Germany controlled the seas, and Britain was isolated. Churchill had a strong belief in the so-called "mosquito raids" against occupied territory, which would boost the war morale, and make the Germans uneasy.

The Germans, however, retaliated harshly with mass arrests and by burning houses. Måløy got off more lightly than Lofoten a short while afterwards, where the Reichkommissar Terboven himself introduced drastic measures meant to serve as a warning to others. The Norwegian authorities in London were not convinced either about the purpose and effect of these raids. The destruction of industrial facilities also led to civilian damage and casualties. On the other hand, it cannot be denied that these raids served an important military function. The Germans reinforced and strengthened their defences, thereby tying down no less than 300-400 000 troops in an area where there would be no major, decisive battles later on in World War II.

'He [Martin Linge] rides on the crest of a wave from the west. He is bareheaded; he went into action without any visor. One hand is clenched to his side, whereas the other is lifted to his chest as if to say: 'You may capture me, but not what is mine'. The sculptor Ståle Kyllingstad made the Linge monument. He came to Måløy in June 1966 to familiarize himself with the proposed site of the memorial. On this occasion, the local newspaper made an interview with him. Kyllingstad knew Linge personally, saying that he wanted to express 'the idealist' with the well-known Anders Hovden quote: 'My everything that is called mine.'
Owner: Fylkesarkivet i Sogn og Fjordane. - Date: 2002. - Photographer: Hermund Kleppa.
Fylkesarkivet i Sogn og Fjordane.
2002.
Hermund Kleppa.