Claus Frimann, born 1746, was vicar at Davik for 42 years. He is known as the poet vicar in Nordfjord, best known perhaps for his book "Almuens sanger" (Songs for the Common People), and in particular, the song "Den norske fisker" (The Norwegian Fisherman). In 1936, the congregation of Davik church erected a memorial dedicated to their famous poet vicar. 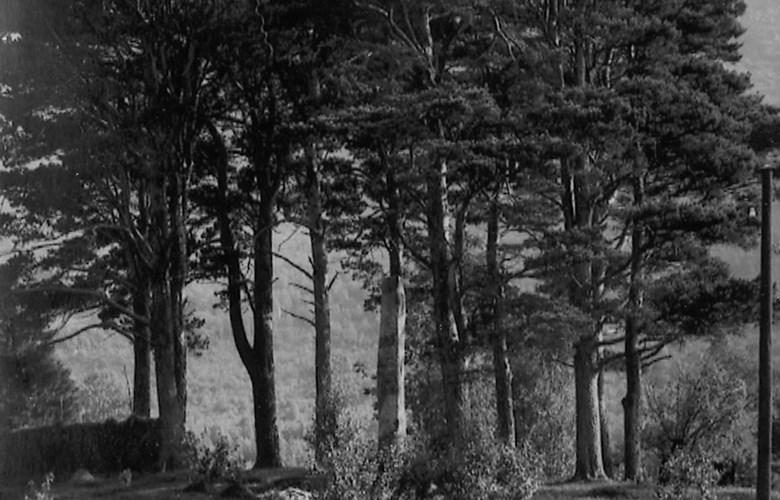 Claus Frimann, born 25 May 1746 at Selje, died 11 October 1829 at Davik, was the eldest son of the vicar P. Harboe Frimann and Sara Cold. In 1768, he passed his final exams in divinity at the University of Copenhagen. In 1771, he became a curate for the vicar Hans Strøm at Volda. In 1780, he was appointed vicar at Davik, and remained in this post until he retired in 1822. In his last few years, he lived on the property Frimannslund that he had cleared and built for himself and his wife Anna Margrethe, née Meldahl (1746-1829) and their only child, Peder Harboe Frimann (1782-1845).

The Frimann stone stands close to the Davik church, on a small hill surrounded by seven big pine trees. On one of the trees there is a sign with the national coat of arms and the information "Protected by law". The area to the west of the memorial stone is walled in and is used as a kindergarten. One of the fence posts is only a metre away from the pine trees.

At the front, facing north towards the sea, we find the following inscription: CLAUS * FRIMANN * 1746 - 1829. Above the inscription there is a harp figure. At the back is inscribed: ERECTED * 1936

The stone is located on the property Frimannslund where Claus Frimann lived from 1823 until he died seven years later. The stone stand in the centre of a circle of seven huge pine trees planted by Frimann himself. Originally there were 11 trees, but only seven remain. Legend has it that that there was supposed to be one tree for each apostle, but Judas Iscariot, the traitor, was not included. After this, the trees were called the eleven apostles. The hill has also been called "Furehagen" (the pine garden).

From the quay at Davik and up to the church, there used to be a road lined with magnificent ash and birch trees, called Frimannsalleen, - the longest one in Nordfjord. It was Frimann's predecessor, Jens Andreas Krogh, vicar at Davik 1769-1780, who planted the first trees, and Frimann kept on where his predecessor had stopped. Now all the trees are gone. The last two trees were removed about 1970 to make room for a residence.

From the northern side of the fjord

The material for the memorial stone was found in the spring of 1936 on the northern side of the fjord, on the farm Lund between Kjølsdalen and Stårheim. A man from Selje by the name of Bortne was in charge of the demanding work of chiselling out the six-tonne rock and transport it to the quay. The stone was loaded up on the truck of Ingebrigt Naustdal who in the lowest low gear possible drove it out to Kjølsdal. Many people followed the transport with interest, and in some places the car tyres made deep ruts in the rural road.

A man called Steindal took care of the transport across the fjord. On 15 April, by means of a stone barge and a tugboat, in good weather and with many a helping hand, he managed to get the stone onboard, transported it safely across the fjord and put it ashore at Davik.

1000 people turned up at the unveiling ceremony

The Frimann stone was unveiled on Sunday 5 July, in the presence of about 1000 people. A big ceremony was organized, both in connection with the unveiling ceremony and the 50th anniversary of the Davik church. The unveiling ceremony started in the afternoon when the mayor welcomed everybody to the ceremony. Then a choir sang two songs by Claus Frimann to old folk tunes. The editor Olaf Hanssen gave the unveiling speech and had the honour of unveiling the stone.

After this ceremony, everybody gathered at the churchyard where the dean Nybø laid a wreath on Frimann's grave.

Claus Frimann in the hymn books

Claus Frimann published a number of hymn collections. His hymns have also been found in the church hymn-books up to the present time. The "Evangelisk-christelig Psalmebog" published in 1798 had no fewer than 61 Frimann hymns. In the Landstad Hymn-book, however, only one was included, whereas Ingemann's Danish Hymn-book at the same time had twenty Frimann hymns. "Nynorsk Salmebok" (1925) had two, whereas Landstad's Revised Hymn-book (1924) had none. In "Norsk Salmebok" (1984/1985) there are three Frimann hymns: ##615, 625, and 852.

The cover of the CD "Almuens Sange" (Songs for the Common People), 1999, shows a painting of Davik with the property of Frimannslund. Claus Frimann built the residence at Frimannslund for his only son and himself when he retired in 1822 and moved out of the vicarage the following year.
Owner: På CD´en Almuens sange, 1999. - Date: Kring 1820. - Photographer: Kunstnar: Ukjend.
På CD´en Almuens sange, 1999.
Kring 1820.
Kunstnar: Ukjend.

In accordance with the Law of Natural Protection of 25 July 1910, this and the other trees were protected "against damage and destruction of any kind" by royal decree of 7 June 1935. The resolution text contains the following: "A group of 11 pine trees, planted by the poet vicar Claus Frimann in "Furuhagen" at Frimannslund, farm no. 17, holding no. 8, Davik municipality".
Owner: Fylkesarkivet i Sogn og Fjordane. - Date: 2000. - Photographer: Hermund Kleppa.
Fylkesarkivet i Sogn og Fjordane.
2000.
Hermund Kleppa.