Erikstad - locally pronounced <i>er'sta</i> - is located in the western part of Svanøy. The farmyard is situated a short distance up from the bay of Erstadvågen on the north side of the island. The farm has many old buildings and a number of enormous farmyard trees. Sheep graze in the fenced-in pastures, and horses can be seen on the premises. 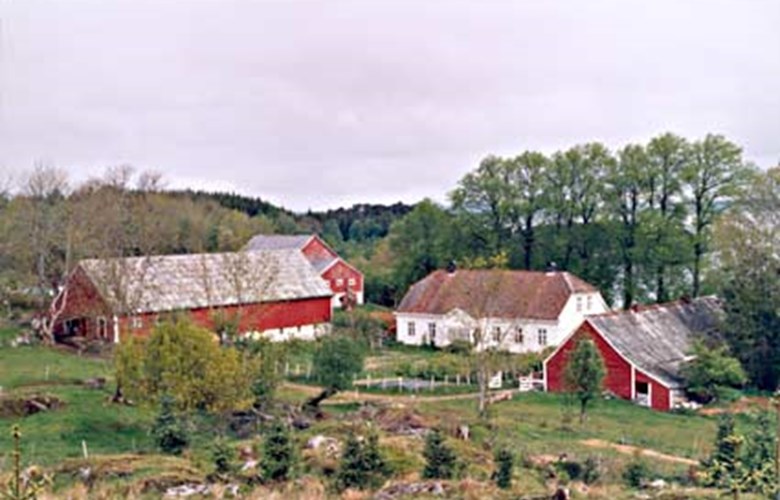 The farmyard at Erikstad seen towards the north with the main residence, the "Drengestova" and "Kjellarhuset" to the right and the old barn "Gamlefjøsen" and the newer barn to the left. A gigantic farmyard tree between the barn and the main building had to be felled in 2003.

From Svanøybukt - the boat stop at Svanøy - the road leads westward, past the Svanøy manor and the farmyard of Solhaug. In the middle of the island, a road leads south to the Kvalstad farm. The road continues past the Svanøy school, and a little further away, we find the sign "Gamlevegen til Erikstad" (the old road to Erikstad), now hardly more than a forest road, with a wooden bridge across the inner part of the Stryvatnet lake. The old road joins the new road just before the infields of Erikstad, where "Erikstad gard" (farm) is painted on a closed gate.

There are five buildings in the farmyard at Erikstad. In front of the main building, erected in 1842, there is a garden with flowers and bushes, vegetables, fruit trees, and so on. To the north - down towards the sea - there are a number of big elms. The oldest house - "Drengestova" (the servants' quarters) - is located to the east. This low, red-painted building was formerly used as a residence for servants. At present, the house is used as an outbuilding and as farm museum, containing a huge collection of kitchen utensils, tools and implements. Below this house is "Kjellarhuset" (literally the basement house) which is actually a "stabbur" (storage house) with a bell on the roof. The basement was used for storing potatoes, and this has given name to the house. To the west, there are two red-painted barns, one of which is called "Gamlefjøsen" (the old barn). Further to the west there is a newer residence.

By the deed of 10 July 1804, Ole Torjussen from Varaberg in the valley of Hallingdal became owner of Svanøy. He took the family name Svanøe, and divided the island between his sons Christopher and Hans. Hans got the Kvalstad and Erikstad farms. In 1889, Erikstad, with a property tax of 7-50, was the second biggest farm on the island after the Svanøy estate.
Hans Svanøe was unmarried, but adopted six orphans after his sister, Bertha, who was married to Endre Johannessen at Voss. In the family, Hans Svanøe was afterwards referred to as uncle Hans. He built the barn, drained and cultivated the land, and sent butter to Bergen. In addition, he was an accomplished painter.

Hans Svanøe left Erikstad to his nephew Endre Svanøe (1848-1941) who was educated as an agricultural candidate, and machine and building engineer. The next owner and farmer was his son Einar who for a number of years was chief municipal treasurer in the former municipality of Bru. Einar left the farm to his son Endre (1917-2000, married to Alvhild, born 1930.
Endre was very much interested in forestry and planted some areas of spruce. His daughter was given the deed for Erikstad in 1985.

In recent years, few investments have been made to modernize the farm operations. Today the farm provides fodder and pastures for about 90 sheep and some horses. For many years, Solveig Svanøe has been running a riding centre. In 2004, she has eight horses - four fjord ponies, two Nordland horses, one small "døle horse", and a Shetland pony.
The riding centre runs courses and has accommodation facilities on the farm as well. The area is particularly well suited for riding with practically no traffic and a fair number of forest roads in the outlying fields.

The farm name Erikstad consists of the man's name Erik and stad which means the place where Erik or Eirik lived. Tradition has it that the farm name dates back to the Viking king Eirik Blood-axe, son of Harald Fairhair and queen Ragnhild, who by his father was given the power over all the land that his father had united to one kingdom.
In his book Norske gaardnavne , the toponymy (place name) expert Oluf Rygh has included the following written varieties from early sources:
Æirikstodum (Bergens Kalvskinn, cadastre, 14th century), Erichstad, Erickstadt 1563, Erichstad 1603, 1608, Ericsta 1667, and Erichstad 1723. Rygh also writes that the farm could have been given its name in the early 14th century.

In the rooms at Erikstad a number of framed diplomas hang on the walls. This was given to Einar and Endre Svanøe for their "sense of respect for cultural values handed down from previous generations [...] in connection with the work on the buildings of the Erikstad farm."
Owner: Fylkesarkivet i Sogn og Fjordane. - Date: 2004. - Photographer: Hermund Kleppa.
Fylkesarkivet i Sogn og Fjordane.
2004.
Hermund Kleppa.