On Friday 19 October, 1945, the Selje church was filled to capacity by village people and others. The occasion was the funeral for Oluf Ingebrigtsen Aarsheim. He lost his life in a war episode in the Atlantic and now his urn had been brought home. Afterwards his siblings erected a memorial stone on his grave. 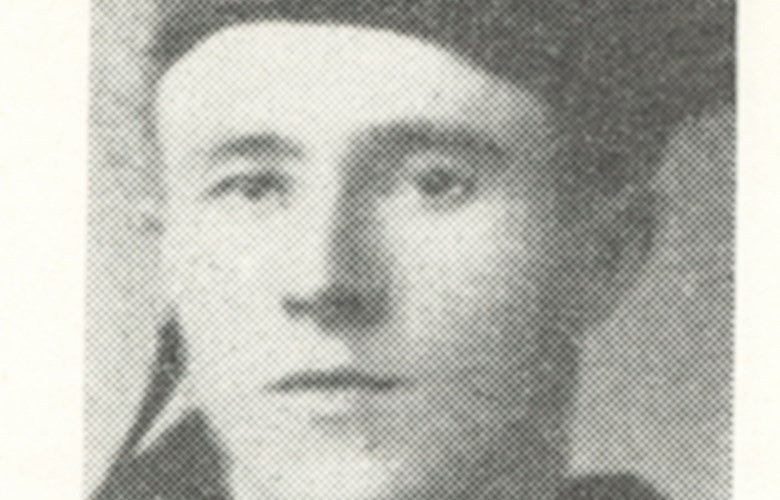 Oluf Ingebrigtsen Aarsheim (1898-1941). He died when his ship was bombed in the Atlantic on 15 September, 1941, and was first buried in Scotland. Ingebrigtsen was a ship carpenter, but he was apparently also a gunner. The merchant ships were also armed with guns and machine guns.

"INGEBRIGTSEN, OLAF, ship carpenter, Selje. Born 24 December, 1898 at Selje, son of Ingebrigt Johannesen, born 1844, and Janikke Olsdatter née Refsnes, born 1852. Worked as a carpenter on MT Vinga and died on 15 September, 1941 during an air raid on the ship on her way from England to America. Buried at Selje."
Note: On the gravestone and in the death announcement his family name is Aarsheim.

A naval vessel came to Selje with the urn, and a delegation from the Navy participated in the funeral to honour the dead sailor. The vicar Tuving officiated at the funeral and gave a speech. Wreaths were laid by the siblings, from the village people of Selje and from the youth in the village, from the Selje women's association, and from the Seamen's Mission. A group of small girls came forward and each put a flower by the urn.

Two seamen carried the urn to the grave where the Selje Men's Choir sang the hymn Leid milde ljos. There was a reception after the funeral at Birkeli hotel. 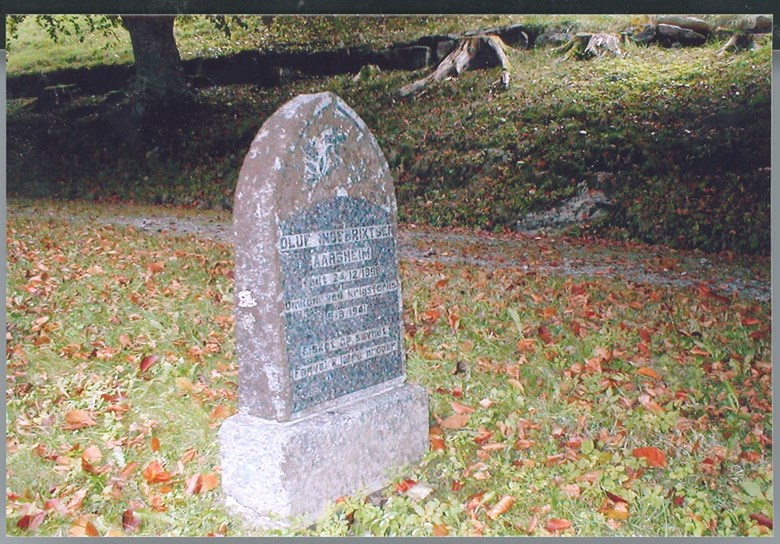 Obituary from a childhood friend

Bernt Stokkevåg wrote an obituary on his childhood friend in the local paper "Fjordenes Tidende" on 25 October. He writes that Oluf went to sea soon after his confirmation and he stayed on ships until his untimely death. When war broke out, Oluf decided to remain on his post, for the flag, for the country and for freedom.
"Now your life's voyage has come to an end. Your shore leave is for ever. We who got our freedom back thank you for your contribution and call down peace on your memory."

The war episode in the Atlantic

In the autumn of 1941, Oluf Ingebrigtsen Aarsheim was signed on MT Vinga belonging to the Mowinckel shipping company in Bergen. On 15 September, 1941, Vinga sailed in the convoy OS 6 from England to America. The ship was somewhat left astern, and therefore had no naval protection. German bombers attacked in the morning and two bombs hit amidships. The captain, Erling Skaare, and seven men were killed, and four were seriously hurt.

The destroyer Campeltown later saved 33 survivors, and when it turned out that Vinga in spite of extensive damage was able to stay afloat, it was towed in to Rothesay in Canada, where it arrived safely on 20 September.

In 1900, Ingebrigt Johannessen Aarsheim and his wife Janika Olsdotter, Oluf's parents, lived on a holding under the farm Årsheim with the farm registration number 13/6. Ingebrigt owned the holding and supplemented his income with fishing. In the 1900 census they are registered with four children: - Johannes, born 1881 (farm worker), Karen, born 1889, Petra, born 1895, and Oluf (Olaf), born 1898.
All of Oluf's siblings left Selje and settled down in Haugesund, Måløy, and at Herøy in Sunnmøre respectively. Oluf was 43 years old and single when he died.

Ingebrigt Aarsheim died several years before his wife. She sold the holding and built a small house on the outskirts of the property where she lived for the rest of her life. There are still remnants of the foundation wall, still referred to locally as the Janikke wall.

The urn was placed in the grave at the funeral on 19 October, 1945. Two seamen carried the urn from the church, knelt and placed it in the grave. The gravestone has the following inscription:
OLUF INGEBRIGTSEN * AARSHEIM * born 24/12/1898 * died in action at sea * 15/9/1941 * Loved and missed * Farewell dear brother
Owner: Fylkesarkivet. - Date: 2003. - Photographer: Helge Borgund.
Fylkesarkivet.
2003.
Helge Borgund.