On the churchyard at Eivindvik there is a small low stone with a text plaque. It was raised in remembrance of 16 British naval soldiers who lost their lives in December 1917. Their ship was sunk by a German submarine. 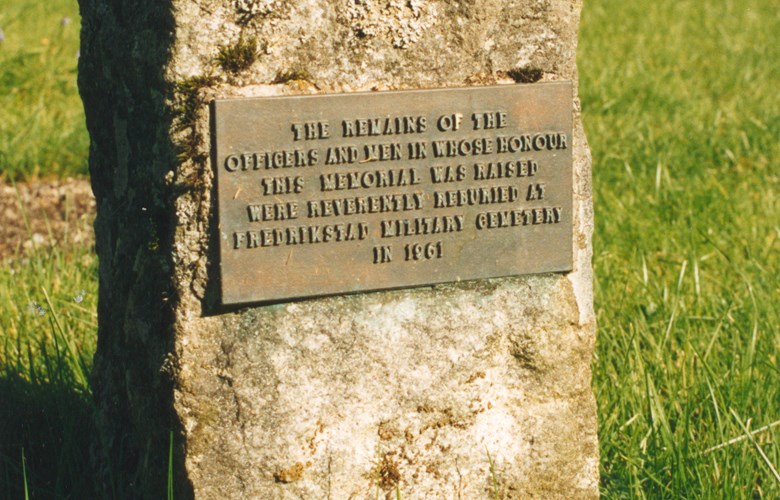 The memorial stone on the churchyard at Eivindvik for the British war graves that were moved to Fredrikstad in 1961.

The approx. half-metre-high stone stands in the southeast part of the newest churchyard, not far from the gate to the church. The English inscription says that it was raised in 1961 or shortly afterwards. On the text plate we can read that the stone was raised in honour of officers and men, and that their remains were reburied at Fredrikstad Military Cemetery in 1961.

These British war graves date from 1917 when 16 persons from a British destroyer were buried. In 1931, the Commonwealth War Graves Commission erected a bigger memorial on their graves. This was taken down when the remains of the war victims were moved to Fredrikstad in 1961 and the memorial replaced by the present stone.

The memorial from 1931 consisted of seven stones, one central stone and six gravestones. On the central stone was written (retranslated from Norwegian):

"This stone is erected by * officers and crew * on * British and neutral ships * in memory of the * officers and men * on * HMS "Partridge" * lost in action off this coast * 12 December 1917 * during escort service of the * east-going convoy.

The five identified seamen were:

On the sixth stone stood:

Eleven seamen of the Great War. Known unto God.

In 1961, all British war graves from the First World War in Norway were moved to a military cemetery in Fredrikstad. There are now in all 82 war victims from the United Kingdom and the Commonwealth buried in Fredrikstad, of these 51 unidentified. In the county of Sogn og Fjordane there were English war graves at Gulen, Solund, Askvoll, Kinn, Vågsøy and Selje.