Professor Nikolaus Gjelsvik (1866-1938) was born at the farm of Gjelsvik in the municipality of Vevring, now Askvoll municipality. He is regarded as one of the greatest lawyers this country ever fostered. Gjelsvik also contributed much in the language movement, the youth movement, and the temperance movement. In 1941, the people of the Sunnfjord district erected a memorial stone at his place of birth. 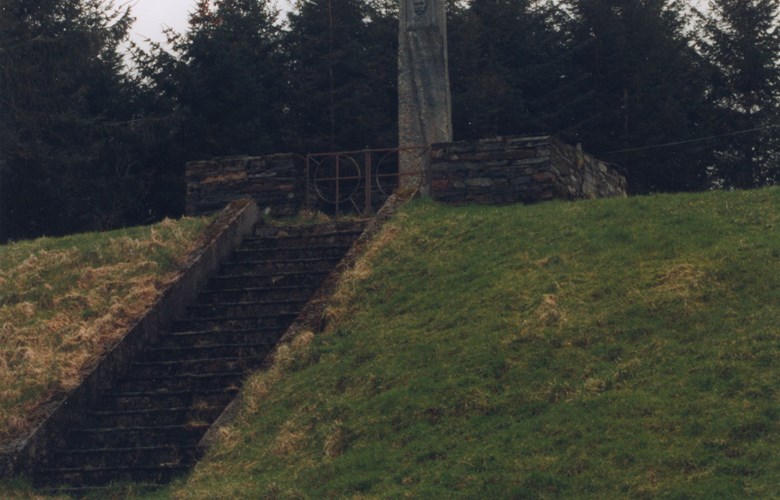 The Gjelsvik stone stands at Gjelsvik on the south side of the Førdefjord. It was erected by the people of the Sunnfjord district and was unveiled on 24 August 1941. Gjelsvik was buried in Oslo, but the urn was later moved and interred in front of the memorial stone. Fredrik Gjelsvik built the steps up to the stone and the stone fence.

Nikolaus Matias Gjelsvik was born at the farm of Sørgarden at Gjelsvik on April 11 1866. His parents were the farmer Øystein Eirik Olavson Gjelsvik and Malene Andreasdotter Selvik. He took the matriculation examination at Stavanger Katedralskole in 1887 and studied law at the University of Kristiania (now Oslo) from 1893. Later, he went to study in Germany and in France several times, and was created doctor of law in 1896. In 1897, he became an associate professor of law, and in 1906 a full professor.

As early as in 1898 Gjelsvik gave his first lectures in international law, and in 1905, he was an expert secretary in international law in the negotiation delegation in Karlstad. He wrote several textbooks, and over the years he created a legal language in "nynorsk" (language based on Norwegian dialects).

Nikolaus Gjelsvik died in Oslo on November 14 1938. He left a wife and eight children.

The Gjelsvik stone is at Gjelsvika, close to the farm of Sørgarden, on a 4-5-metre-high ridge beside the rural road which branches off state road 609 on the south side of the Førdefjord. Steps lead up to the five-metre-high memorial stone, which is surrounded by a square fence of natural stone. On the front side is a facial relief in bronze above the inscription:

Professor * NIKOLAUS GJELSVIK * 1866 - 1938 * Han reiste det norske rettsmålet (he created the Norwegian legal language)* Gud evigt signe Norigs land, (may God for ever bless Norway)* det er mitt siste ord (those are my last words)
On the back side is inscribed: Sunnfjord erected the stone

The idea of raising a stone to the memory of Nikolaus Gjelsvik was first expressed in a letter to the editor of the local newspaper "Firda Folkeblad". The Sunnfjord Youth Association liked the idea and chose three of its members to a committee to pursue the plan. Vevring municipal council elected one member. The committee consisted of these members: the teacher Mads Flokenes, the member of the Storting (Parliament) G.A. Hegrenæs, the teacher Kristian Ramstad, and the newspaper editor Ludvig Botnen. The committee chose Flokenes to be chairman.
They found the material for the stone on the farm of Hovland in Askvoll. Two youth associations helped transport it to Gjelsvik. The youth association "Framhug" at Grytøyra had the stone transported by sea to Hegrenes. There the youth association "Vårvon" at Gjelsvik took over and brought it to its destination.

The Gjelsvik stone was unveiled on Sunday, 24 August 1941, and more than 400 people from the Sunnfjord district were present. The widow, Eugina Gjelsvik, was also there with two daughters and a son. G. A Hegrenæs opened the ceremony. Abraham Strømmen read a prologue written by Mads Flokenes, and professor Gustav Indrebø gave the unveiling speech. He particularly pointed out Nikolaus Gjelsvik's work to create a legal language in "nynorsk". After the unveiling the chairmain of the committee, Mads Flokenes, gave a speech about Nikolaus Gjelsvik and the Sunnfjord district.

Nikolaus Gjelsvik died in Oslo in the autumn of 1938. After the memorial stone had been erected at his place of birth at Gjelsvik, his closest family wanted the urn to be interred here. A petition was sent and granted. The urn was moved from Oslo and interred in front of the stone.

Vevring municipality agreed to maintain the memorial stone and the grave.

On 11 April 1966, on the centenary of Nikolaus Gjelsvik's birth, a memorial ceremony took place. Among the attendants were two sons of the professor, a grandson, and a great grandson whose name was Nikolaus. Wreaths were laid by the family, the Gjelsvik community, Askvoll municipality, Sunnfjord Youth Association, and Firda Language Association.

Bergens Tidende (newspaper) printed a comprehensive article on professor Gjelsvik on the day after he died on 14 November 1938. At the end of the article was an overview of his education, work, and clubs and organisations where he had been a member. - Date: 1938.
1938.