"In a statement from the chief command of the Norwegian Royal Navy he died on his post for the country." These words are written in the death notice of Peder P. Sandvik on 20 August, 1945. Peder Sandvik lost his life during an air raid on London on 7 March, 1945. His ashes were brought home and he was buried in the graveyard of Leikanger church on 21 November the same year. 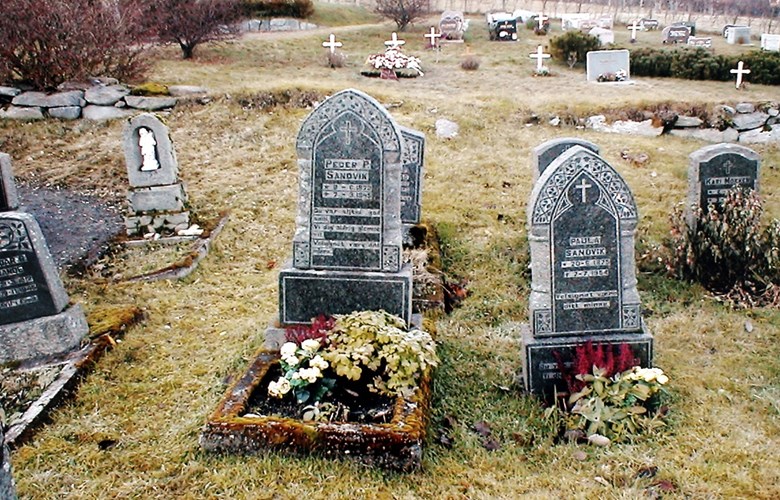 The graves of Peder P. Sandvik and his wife Paula at the Leikanger churchyard at Selje.

Biography in the book Våre falne

"SANDVIK, PEDER, farmer and whaler, Selje. Born 8 June, 1879 at Selje, son of farmer Peder Johnsen Sandvik, born 1836, and Synnøve Torbjørnsdatter, born 1835. Married 1903 at Selje to Paula Eltvik, born 1876 same place, two children. During the Second World War he worked as a fisherman in Scotland and later as a watchman at a naval depot in London. In 1941, he was on a boat that came back to Norway to put two persons ashore and carry refugees back to Britain. He lost his life during an air attack on London on 7 March, 1945. Buried at Leikanger".

Peder Sandvik died on 7 March, 1945 in London and was buried there. In the autumn his urn was brought back to Norway and he was buried in the graveyard of Leikanger church on Tuesday 21 November, 1945. Many people from his home village turned up for the funeral to show Peder Sandvik the last honours. The vicar Tungesvik gave a moving speech in the home before the urn was taken to the church. By the road leading up to the graveyard a salute was fired. During the memorial service in the church the vicar gave another speech, a choir sang, and many wreaths were laid on the coffin.

"Everybody who knew you is left with sorrow in our hearts. You were a real man, one of those who wanted something, knew something, and who also did something. You may have seemed a little tough sometimes, but behind the tough mask there was a warm heart, always willing to find help or lend somebody a hand wherever it was needed. We thank you for your great and unselfish work, and for all the good memories you have given us that we will always remember. - May God's peace be with your dust."

Peder Sandvik's name is also inscribed on the memorial stones at Leikanger church and at Selje church.

Peder P. Sandvik (1879-1945) was a farmer, fisherman, and whaler. He left for England and took part in the resistance fight until he lost his life during an air raid on 7 March, 1945. His urn was brought home to Norway in the autumn of the same year.
Owner: I <i>Vår falne.</i> - Date: Ukjend - Photographer: Ukjend.
I <i>Vår falne.</i>
Ukjend
Ukjend.