17 May, 1914. "The day was solemn and fine in all respects. The weather was beautiful and calm. Just a soft breeze to open up the flags on the poles. There were many flags this year, more than ever before. This was the day for the unveiling ceremony at Helgheim, Sogndal folkehøgskule (people's high school)". 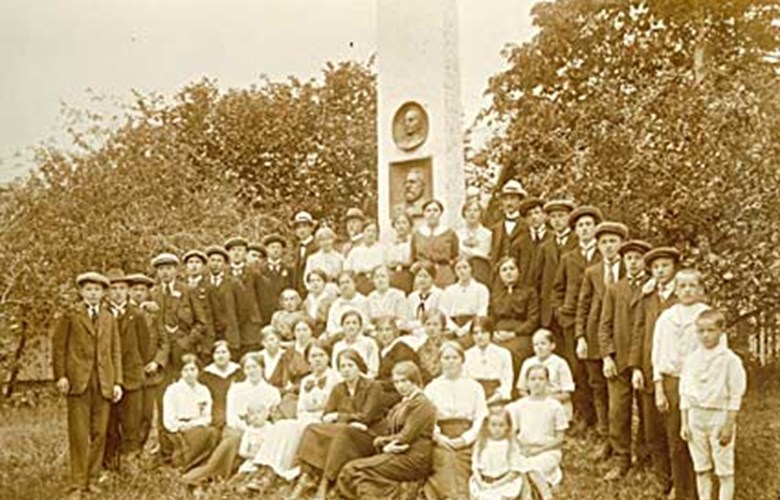 Students and teachers at Sogndal folkehøgskule gathered by the memorial stone commemorating Henrik and Mette Dahl. The year is ca. 1914-1916.

In the afternoon on 17 May, 1914, a big parade set out from the church at Stedje. A memorial stone commemorating the soldier and the "Eidsvoll man" (representative at the constitutional assembly) Johan Loftesnes had recently been unveiled. Now another ceremony was to take place, the unveiling of the memorial stone at Helgheim to commemorate Henrik Dahl, headmaster for many years, and his sister Mette.

The people's high school association had planned the ceremony. The stone was chiselled out in the valley of Seimsdalen in Årdal and transported to Sogndal by the boat belonging to Johs. Vangsnes from Fresvik. The sculptress Ambrosia Tønnesen in Bergen had made a face relief and the association had agreed on a suitable inscription.

Rasmus Haugsøen (1867-1951), vicar and adherent of the "Nynorsk" language movement, gave the speech at the ceremony. He spoke about the rural culture, about folk tales and songs, woodcarving and artistic weaving that in recent decades had come into favour again. He also spoke about the need for education and enlightenment in the rural communities, stressing the position of the people's high school in this respect. More than anybody else, it was Henrik Dahl and his sister Mette who built Helgheim, making it a place and home of learning for youngsters from the west of Norway.

The chairman of the school association, Wilhelm Flugheim, thanked Haugsøen for his speech, and said that the people of Sogndal had raised money to finance a bust of Dahl to be placed in one of the school rooms. Olav Hauge, the school headmaster, offered his gratitude on behalf of the school for the memorial stone and the bust.

Thus the second unveiling ceremony in Sogndal that day had come to an end, and the parade moved on to the primary school Trudvang.

Henrik Mohn Dahl (1844-1909), born in Bergen, was son of the vicar Henning Frimann Dahl and Margrethe Albertine Henriette Mohn. He grew up in the country at Innvik and Lærdal, and with his brother spent much time on outdoor activities. The young Dahl got a thorough knowledge of the rural culture, and even considered becoming a farmer. He liked poetry and wrote hymns and songs.

Henrik Dahl became Master of Theology in 1868, worked first as a curate at Os near Bergen, spent two months in 1873 on a visit to Sogndal to the founder of the Sogndal People's High School, Jakob Sverdrup, before leaving for America. He returned to Sogndal in 1874 and became a teacher at the school. Now he spent a substantial part of an inheritance to build a new school building with a teacher's apartment at the strait of Loftesnessundet. The place was named Helgheim. In 1878, he took over the school and became headmaster, and, in 1885, put up a new school building to be used as a hall of residence for the students.

Henrik Dahl worked hard for a written "nynorsk" language. In 1882, he organized a conference for teachers where for the first time in the country a course in "nynorsk" was given. He sat on various boards in the village, he served as a mayor one period, and he was deputy representative to the Norwegian Storting (Parliament).
Due to bad health he had to retire as headmaster in 1896. He died in June, 1909.

Mette Mohn Dahl came to Sogndal People's High School with her brother. She knew foreign languages, and gave private lessons to pupils. Like her brother, she was financially independent due to a large inheritance, and contributed to the cost of the new school buildings. Mette Dahl died in 1907. Both she and her brother are buried at the Stedje church in Sogndal.