The farms of Undredal and Hjøllo are located close together on the western side of the Aurlandsfjord, about five kilometres south of the entrance to the Nærøyfjord. Hjøllo is located on a terrace about 100 metres above sea level to the east of the river Undredalselva. About 1900 there were 14 holdings on these farms, and the cultivated fields were only about 125 acres. Consequently, the outlying fields and the mountain farms played an important part in the farm economy. 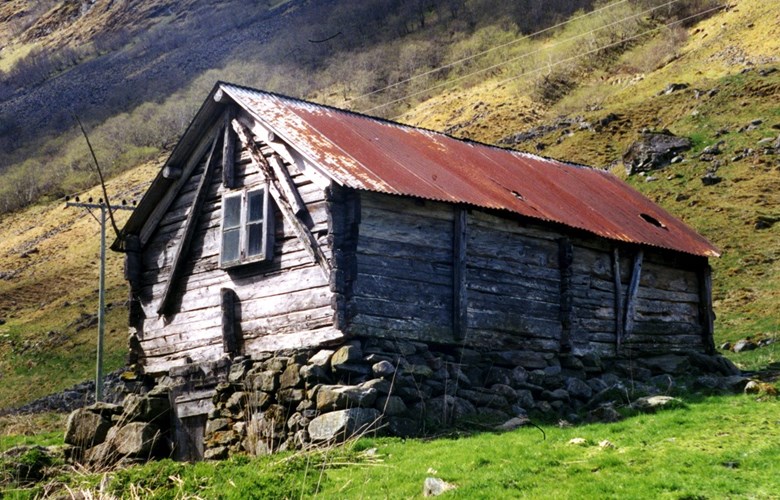 An old spring farm building at Melhus. This farm is located two kilometres southwest of Undredal, and in its heyday Melhus had 12-14 farm buildings.

When farming was operated at its most intensive level, there were eight-nine mountain farms in use. Seven of these farms are located in the valley of Undredalsdalen and in the mountainside on the western side of the valley. Two farms are located in side valleys; Jonadalen and Nisedalen. The first mountain farm taken into use in spring was Melhus, about 140 metres above sea level, at a distance of two kilometres south of the farmyard. They used to move up there in the latter part of May.

When grazing came to an end at the spring farm, they moved further up to Langhus. This farm is located on the valley floor at 300 metres above sea level and six kilometres south of the farmyard. There used to be a track for pack- horses up to this farm, but just before the Second World War, a two-metre-wide tractor road was built. In 1986 a modern road was built from Undredal to Langhuso and a few hundred metres further up to join the new E16. At Langhuso there are 10-12 farm buildings, a couple of cabins, as well as foundation wall remnants of 10-12 old houses.

Langhuso is the dative plural form of the noun langhus, and the word then means "the long houses". Furthest to the north, on a flat area by the forest, is a big site. This site measures six by twelve metres, and the house has been divided in the middle. This site dates back to the period before the Black Death, probably to the 13th or 14th century. Other old sites of this type are not known, but newer houses may have been built on top of these old sites, or river floods may have erased any traces of them. 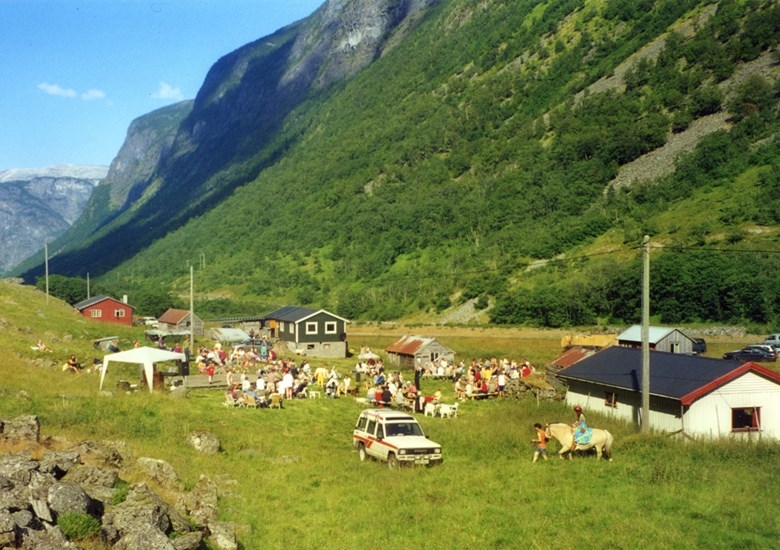 Moving from one farm to another

In former times they should have moved up to the summer farm of Langhuso by 2 July. Then good food was served and there were games and dancing outdoors. Up until this date it was the maids who had taken care of the operation at the summer farm, but they were now replaced by the farmers' wives and their children.

After about three weeks at Langhuso they moved up to the mountain farms - Jonadalen, Nisedalen, and Grindafletene - further west and south in the mountains.

In early September they returned to Langhuso and stayed there until Michaelmas, 29 September. In more recent years the mountain farms and pastures were not used, and the operation at Langhuso has changed as well.

Before 1900 each farmer could have six-seven cows, and much butter was made at the summer and mountain farms. They separated the cream from the milk, and in a wooden churn they stirred the cream with a plunger (dasher) until it turned into butter. The milk that was left after the skimming of cream was used to make cheese. This cheese was less fat than the goat cheese and the ordinary brown cheese, and it was called "rendebrimost". It was mostly used at home on the farm. 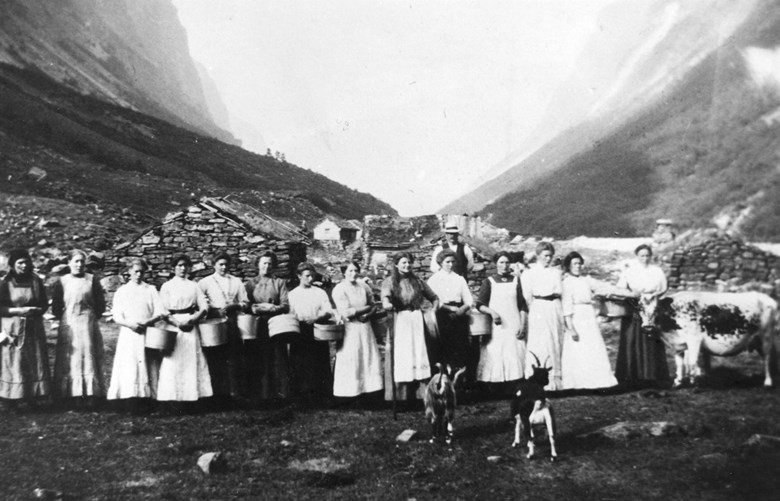 Throughout the 20th century much goat cheese was produced at Langhuso. It was common for a farmer to have 50 goats and four-five cows, but the number of animals naturally varied between the big and small farms. In its heyday there were 14-15 farmers and smallholders who used Langhuso as a summer farm. Some of the cow milk was used for consumption, and the rest was mixed with goat milk and used in the production of goat cheese.

In 2003 three farmers at Undredal established a new summer farm facility at Melhus. About 250 goats stay for some time at Melhus and some time at Langhuso, but all cheese production takes place at Melhus. The Norwegian Food Safety Authority has drawn up stringent regulations in terms of hygiene and production facilities. After a number of applications and setbacks, the farmers were eventually allowed to produce cheese from raw, unpasteurized milk as they had always done. The goat cheese - both the white and brown varieties - from Undredal enjoys a good reputation and the farmers have no problems selling their products.