Jon J. Hop was the first person from Solund to lose his life in the war 1940-1945. He was a crew member on a vessel on its way to pick up flour at Vaksdal. The vessel was seized by the Germans and came under fire from Norwegian forces. Jon and several more on board were killed. After the war a memorial stone for Jon J. Hop was erected. 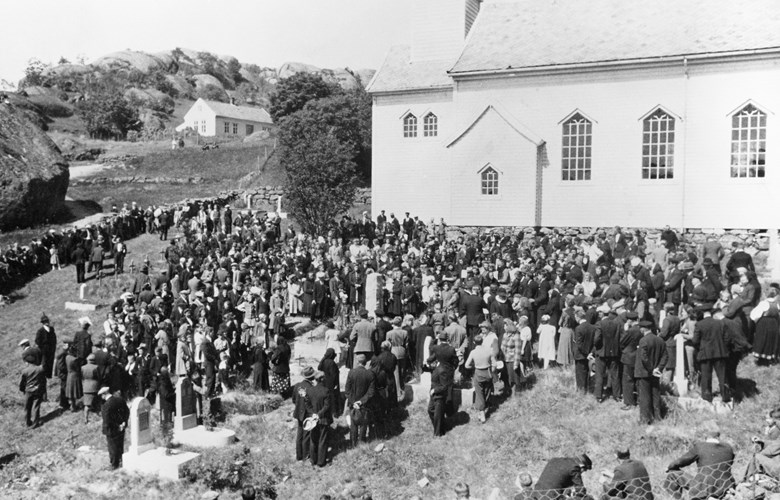 From the unveiling ceremony of the memorial for Jon J. Hop.

About Jon Hop in the book Våre Falne (our fallen)

HOP, JON OLAI, fisherman and farmer, Solund. Born on 15 April, 1922 in Solund, son of Jacob Johan Hop, born 1898 in Solund, died 1935, and Astrid Sofie, née Brosvik in 1895 in Gulen. On 20 April, 1940 he went on a motor vessel to Vaksdal to pick up a load of flour for Solund forsyningsnemnd (municipal office dealing with basic supplies), but was seized in Osterfjorden by Germans, who wanted to make use of the vessel. The Germans entered combat with Norwegian guards on land, and a bullet killed Jon Hop. Buried in Solund.

More on the tragic event

A short time after the outbreak of war on 9 April, 1940, four vessels from Solund were directed to Vaksdal Mølle (flour mill) to pick up flour. One of the boats was Fremad 2 with a crew of three, among them the eighteen-year-old Jon Hop. Probably by mistake they entered Sørfjorden, instead of taking the normal route by way of Osterfjorden. At Trengereid they were stopped by the Germans, who seized the boat and ordered it to transport a German company further east, in order to get behind the Norwegian forces. The vessel was taken under fire by Norwegian forces, and there were many casualties, among them Jon Hop. The two others were not injured although the bullets made holes in their clothes.

The memorial stone in the churchyard at Hardbakke is on the south side of the church, it is obelisk in form, cut roughly, 180 centimetres high and 57 centimetres by 36 centimetres at the foot. The inscription and symbol of a distinct cross with a ring is cut in. On the front side is cut: Jon J. Hop * Born 15 April, 1922 * Fallen 20 April, 1940. On the reverse side: The people of the community * erected the stone * in gratitude

Fremad II was not seriously damaged during the shooting on 20 April. Later the boat was taken to England by young people who wanted to do their part in the struggle for liberty. The picture was taken when Fremad II came back after the war.
Owner: Fylkesarkivet i Sogn og Fjordane. - Date: Ukjend. - Photographer: Ukjend.
Fylkesarkivet i Sogn og Fjordane.
Ukjend.
Ukjend.
resources:
Våre Falne. Bind 2. Oslo 1948.
Steinsøy, Alf: Krigshendingar i havkanten.
Opplysningar frå:
Hans H. Steinsund, Solund.