The first county hospital in Sogn og Fjordane was completed in Florø in 1933. It was based on the old Red Cross Hospital from 1926, which again was established from a hospital for fishermen from 1865. The whole town of Florø has fought hard to keep the hospital. In this way, the hospital has strengthened Florø's identity. In 1995, the hospital became a department under the Central County Hospital in Førde. 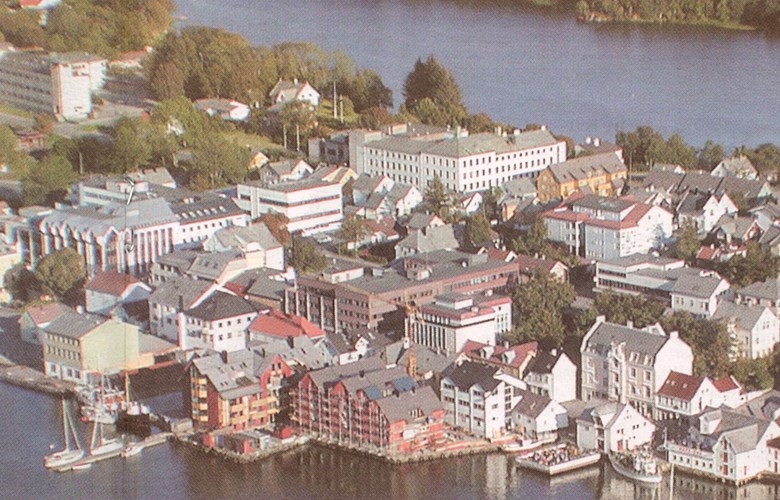 The Florø Hospital is located in the centre of Florø, at the corner of the streets of Hans Blomgata and Torggata, with the lake of Storevatnet just behind. The picture shows the hospital in the upper central part.

In the mid-19th century, the herring fisheries off Florø were extremely rich, and thousands of fishermen from all over western Norway took part. "Fishermen doctors" were stationed in Florø during these fisheries, and thus a need arose for a separate hospital. This was completed in Florø in 1865. It was financed by the establishement of a so-called Spring herring fee fund, based on a fee on the export of winter herring (then called spring herring). In October 1867, the fund's own newly built hospital was opened with 40 beds. It was the district doctor in Kinn who had the operational responsibility. By modern standards, this building cannot be characterized as a hospital, but rather as a place where the sick could rest and be cared for. Up until 1926, the Fishermen's Hospital was a seasonal hospital for fishermen. However, there was a growing interest for a permanent hospital.

In the early 20th century, the Red Cross had been active in establishing hospitals in many places in the country. In 1926, the newly established Sunnfjord district of the Red Cross carried out a rebuilding of the old Fishermen's Hospital. Half of the cost of 60 000 kroner was raised as gifts. The remaining half was borrowed with guarantees from various municipalities and the so-called Spring herring fee fund. The hospital could now offer surgical and medical help. However, the great enthusiasm people had had for the new hospital cooled off somewhat when it turned out that the hospital was much too small. 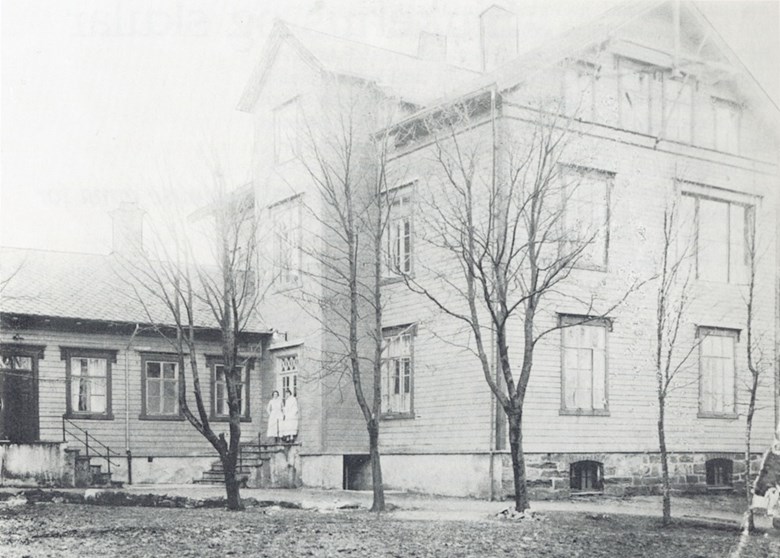 The county hospital after 1933

In 1927, Johan Yttri came to Kinn as the new district doctor, and he became the driving force in the realization of a new county hospital in Florø. In 1930, the county council resolved to build a new hospital. The county would cover 3/5 of the building costs; the rest would be financed in the form of gifts. On 30 September 1933, the new building with 60 beds was taken into use. The county council, however, was not unanimously behind this project. Consequently, in the 1930s, privately operated hospitals were established at Nordfjordeid, Lærdal and Høyanger. These three hospitals became county hospitals in the 1950s. After the extension in 1962, the Florø Hospital had a medical ward with 40 beds, a maternity ward with 10 beds, and a surgical ward with 60 beds. 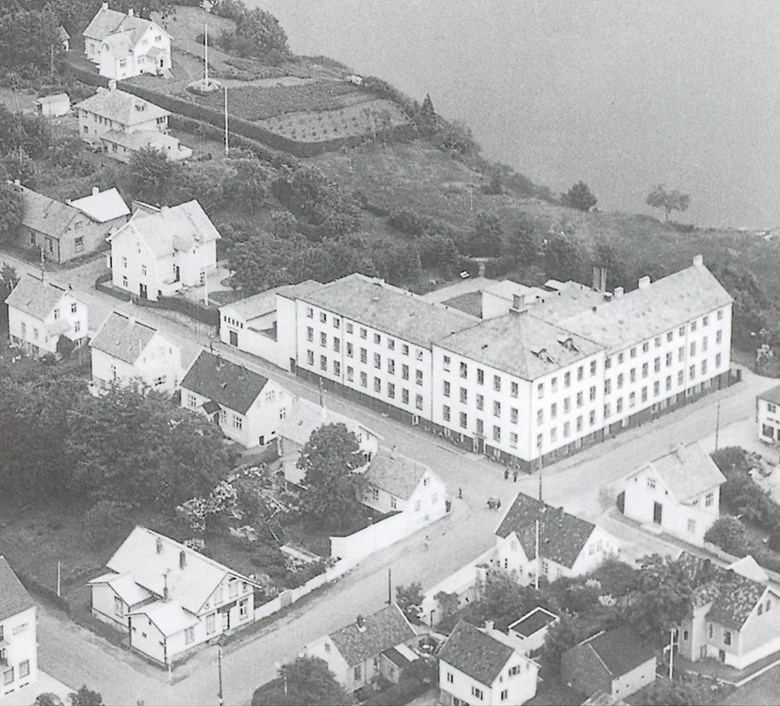 In the 1960s, about half of the hospital patients in the county of Sogn og Fjordane were treated at hospitals outside the county. In 1967, the Directorate of Health recommended the building of a bigger, more differentiated hospital. This led to the county administration proposing the building of a central county hospital in Førde. This proposal caused hard political discussions, where the county council on several occasions decided to build out the four existing hospitals, contrary to professional advice. However, on 23 July 1971, all the discussion was brought to an end when the Bratteli government by royal decree resolved to build a Central County Hospital in Førde.
Many people felt strongly about saving the Florø Hospital, and there were big demonstrations in the streets. It all came to a head in May 1977, when the county council members were discussing the organizational structure of the hospital service. The outcome was that the four local hospitals would be retained, and the Florø Hospital would have 60 beds.
On the other hand, the hospital structure was far from cemented when the Central County Hospital was completed in 1979. According to the new health plans, the number of hospital beds in Florø was to be reduced. In the following years, it has been a hard fight to defend the hospital service in Florø, which, in 1995, changed its status to a department under the Central County Hospital.

The medical services at the hospital are managed by the Førde Central County Hospital. In Florø there is a medical ward with 23 beds, a surgical ward with 10 beds, whereas the maternity ward was closed down after 1995. The hospital has X-ray facilities, a blood bank laboratory, and an anaesthesia section. In 2000, 1264 patients were discharged from the Florø department, with 7680 days in hospital. From the Førde Central County Hospital, a total of 13187 patients were discharged, with 66306 days in hospital.

Johan Yttri, born 1884 at Fortun in Luster, was employed as district doctor in Florø from February 1927. Working at the hospital was part of the job. He was head physician at Florø Hospital for 24 years.
Owner: Kystmuseet - Date: Ukjend. - Photographer: Ole Kr. Mortensen.
Kystmuseet
Ukjend.
Ole Kr. Mortensen.