The old church yard at Grotle

In the year of culture 1997, the people of Bremanger decided that the old churchyard at Grotle should be the memorabilia of the county. The church of Grotle was taken down in 1865, but the churchyard was still used until 1902. In later years it has been standing untouched. 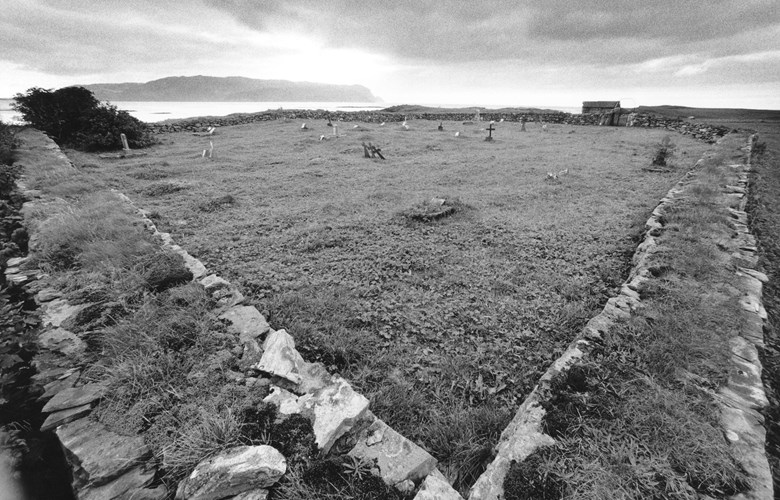 The old Grotle churchyard seen from the northeast corner towards southwest. Close to 100 tombstones have been registered at this site. Most of these are placed flat on the ground and cannot therefore be seen on this picture.

Untouched site by the ocean

The churchyard at Grotle has an open location by the seaside with a full view of the ocean. The old Grotle church, first mentioned in the 14th century, was used for many centuries. Many people travelled by boat to the church, and the many local place names with the word "kyrkje" (~church) in it, such as Kyrkjeflua, Kyrkjeholmane, Kyrkjeberget, Kyrkjevika and Kyrkjestøa are today silent witnesses of the sea lanes. On the surrounding walls and in the churchyard itself there is a highly diverse flora.

The old churchyard at Grotle has a high number of tombstones. More than 100 tombstones of varying age, material, size, form and colour have been registered there. The tombstones are not placed in straight rows according to fixed points in the terrain, and irregularity prevails. Many tombstones are placed flat on the ground, and most of these have inscriptions in the form of letters and numbers, usually in a not very elaborate form. Another characteristic feature is that there are relatively few sumptious and expensive-looking tombstones. Most of them seem to be placed on "Everyman's grave". Quite a few tombstones are homemade, where suitable local stone material has been used.

On the churchyard wall

On old graveyards small tombstones can now and then be found on the churchyard wall. The reason may be that these were placed on the wall when they had lost their function as localization markers for graves. On the churchyard wall at Grotle one stone carries the inscription LMWDN and the figure 1800. By means of the vicar's church record, it is possible to identify the person who got this stone on his/her grave. In the record of dead persons in the year 1800 we find:

Lussieb>MaleneWaldemarsDatterNæsbøe, (Lussie Malene Waldemars Datter Næsbø), died of child infirmity at the age of 1¾ , Bremanger. The bold (capital) letters correspond to the letters LMWDN on the tombstone.

The vegetation was for a long time held in check because people cut the grass and used it for animal fodder. This came to an end about 1970, and the graveyard was soon marked by lack of maintenance and decay. Local people thought this was a great shame and demanded that somebody took charge of the maintenance.

Nowadays the graveyard is maintained according to a preservation plan which is in full accordance with professional requirements of the preservation and maintenance of such an important cultural heritage site. The grass is now cut by means of scythes twice a year.