After the Second World War, 21 corpses were found at the camp for prisoners of war at Ervik in Selje. They were first buried on the graveyard at Ervik, but later on moved to a graveyard at Laksevåg in Bergen. In the bell tower on the churchyard at Ervik, a special room has been reserved as a memorial to commemorate the ¿Russian prisoners" at Stadlandet. 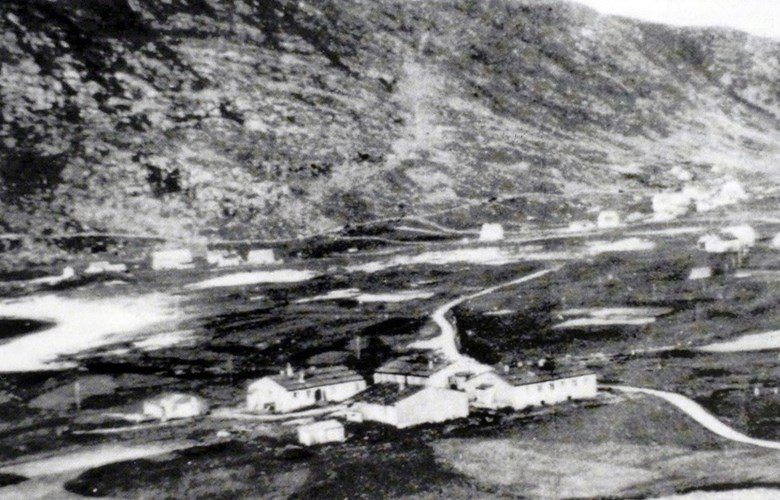 The prison camp at Ervik seen from Eggjane. The houses in the foreground were used for the prisoners. The other houses belonged to "Organization Todt" and were used as quarters for hired workers, office barracks, and a canteen with Norwegian canteen staff.

Prison camp at Ervik
The camp for POWs at Ervik was one of the biggest ones in the county of Sogn og Fjordane. The prisoners were used in the work of building German military installations on the westernmost point of Stadlandet. There were about 120 prisoners at the camp.

Olga Barmen gives her account
Olga Barmen lived close to the camp. In the book Krigsår. she tells about the war years at Ervik:
¿The prisoners came by groups to Ervik. Many died at Ervik, some from diseases, starvation and exhaustion, whereas others were shot. Sometimes we saw dead Russians being transported out of the camp on a hand wagon to be buried at Sanden just below the camp. (..) I can clearly remember one night when nine Russians, maybe more, managed to cut through the barbed wire and escape. Three of them were quickly captured and shot the next morning."

Mass grave
After the war 21 corpses were found, but local people were of the opinion that more prisoners had been buried by the Germans. Some maintain that about 30 Russian prisoners lost their lives at Stadlandet. The 21 bodies were buried in a mass grave on the churchyard at Ervik on a Thursday evening in September, 1945. Many people from Stadlandet attended the ceremony. The vicar Tungesvik officiated at the ceremony and the Selje male choir sang many beautiful songs, conducted by the cantor Ervik. Shortly afterwards, a white-painted wooden cross was erected on the grave site with the following inscription:
¿Here lie 21 Russians" and below, the abbreviation ¿42-43" for the period 1942-1943

Later on, the corpses were transferred to a churchyard at Laksevåg along with the bodies of dead Russian POWs from Florø, Askvoll, Solund and Fjell. 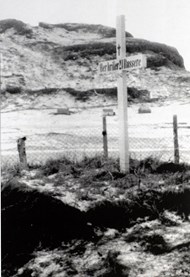 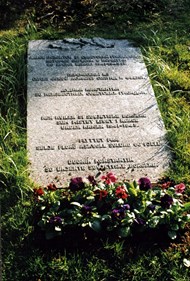 The memorial ceremony
During the memorial ceremony Bjørn Jensen spoke about the Russian camp. Nobody knows how many prisoners who had been at the camp throughout the years, nor how many who were killed or died because of the wretched living conditions. When the war was over, there were 19 prisoners in the camp.

Nobody knows the names of any of the prisoners, nor what happened to the survivors. What we do know is that there were prisoners from many nationalities - Russians, Ukrainians, and possibly also Poles.
In the service a Ukrainian melody on the invocation Kyrie eleison was used, and a Russian melody on the song ¿Eg har høyrt om ein stad i det høge". The viar also sang a song about a yearning for the Ukraine.

On the churchyard Bjørn Jensen played a Russian melody and the vicar read a prayer before the hymn ¿Guds kjærleik er som stranda og som graset" was sung.

Grave memorial on a mass grave for foreign soldiers at Laksevåg. It has the following relevant text for the Russians:
Here lie 51 Soviet citizens who lost their lives in Norway during the war 1941-1945
Moved from Selje Florø Askvoll Solund and Fjell
Dudnik Konstantin