By the school at Byrknesøy stands a memorial for eight men who lost their lives during the Second World War. They were all from Mjømna "sokn" (sub-parish). The memorial stone was unveiled on 17 May 1946. 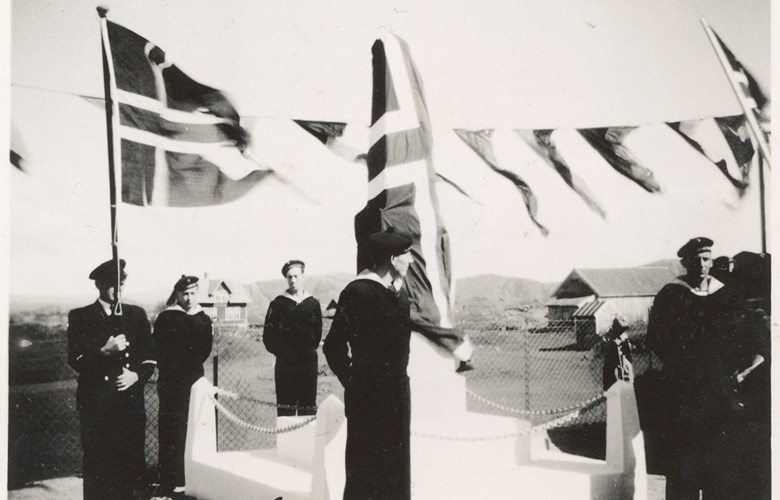 From the unveiling ceremony on 17 May 1946. Naval soldiers stood guard of honour and naval officer Sørvig gave the unveiling speech.

One of the eight war victims from Mjømna "sokn" lost his life in the Valdres campaign in April 1940. The others lost their lives at sea: two on Norwegian naval vessels, two on the "Shetland Bus", two in foreign trade on ships sailing for the free, Norwegian war-time shipping company Northraship, and one onboard a ship that was hit by a mine after the war was over.
Two households suffered particularly hard blows as two family members lost their lives.

The people of Byrknes erected the memorial for the war victims by the school at Byrknesøy. It was unveiled on 17 May 1946. Naval soldiers stood guard of honour and naval officer Sørvig gave the unveiling speech. Afterwards speeches were given by Kristian Holmberg, mayor Randal and Vilhelm Byrknes. 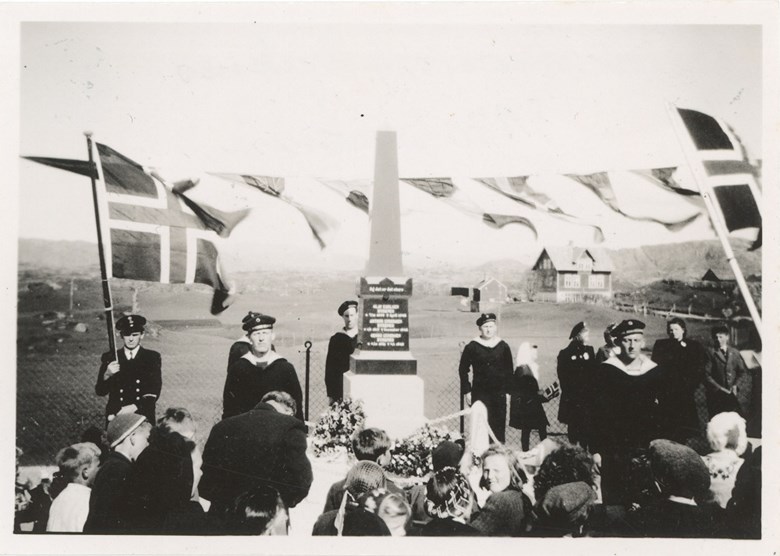 The memorial stone is made in a classical obelisk form, hewn in a dark rock and placed on a two-layer concrete base. The inscription is written on the sides of the two sections of the memorial stone itself. On the top section is written the famous words by the Norwegian poet Per Sivle: Og det er det store * og det er det glupe * at merket det stend * om mannen han stupe. (freely translated: And this is so good and this is so wise, that the standard will stand if the bearer he falls
Under are the names with dates and years for birth and deaths respectively, spread over three fields. On the first field are words from those who erected the monument:
This memorial stone is erected * by villagers in memory * of the country boys who * gave their lives in the struggle for home * and mother country in the war years * 1940-1945 * and the following year * 1945-1946

Biographies in the book "Våre falne"

In 1948, the Norwegian authorities published a four-volume book with reference to all the Norwegians who lost their lives in the Second World War. Below are the biographies of those whose names are written on the memorial stone at Byrknes, in the same order as they appear on the monument.

BYRKNES, KONRAD KRISTOFFERSEN, fisherman, Gulen. Born 7 May 1915 at Byrknesøy, son of Kristoffer Kolbensen, born 1889 at Byrknesøy, and Ingeborg née Martinusen, born 1884 at Fedje. Married at Byrknesøy in 1940 to Berly Ingvaldsdatter Nordheim, born 1917 in Gulen. 1 child. Lost his life as a machine-gunner in action at Bagn in Valdres on 20 April 1940. Buried at Mjømna church.

SLETTEN, PEDER REIDAR, deck-hand, Gulen. Born 27 January 1921 in Gulen, son of Bertin Bergesen Sletten, born 1889 at Lindås, and Anna née Pedersen, born 1887 in Gulen. Was farm worker and fisherman and helped people escape across to England. Had to escape himself in 1941 and joined the Norwegian Navy. Lost his life on 18 November 1942 when the corvette Montbretia shipwrecked in the Atlantic.

BIRKNES, OLAV LEONARD, seaman, fisherman, Gulen. Born 7 December 1906 same place, son of Karl Severin Endresen, born 1871 in Gulen, and Martha née Torbjørnsdatter, born 1870 at Bremnes. Worked as a seaman on MS Uranus of Bergen. Went to Shetland on a fishing boat in May 1941, and took with him a Gestapo policeman from Bergen. Joined the Norwegian Navy. Died on 22 April 1943 on the return crossing to Shetland after a raid along the Norwegian coast with the fishing vessel Gullborg.

BYRKNES, GEORG NORVALD, fisherman, Gulen. Born 9 October 1921 in Gulen, son of Lyder Andreassen, born 1882, and Sina née Sørensen, born 1890, both in Gulen. Went to England and served in the Norwegian Navy there. Lost his life on 4 January 1941 when the minesweeper Bodø hit a mine off Aberdeen after a raid along the Norwegian coast. Article about him and his brother Arthur in the newspaper Bergens Tidende in January 1945.

BYRKNES, ARTHUR, fisherman Gulen. Born 1 September 1917 in Gulen, son of Lyder Andreassen, born 1882, and Sina née Sørensen, born 1890, both in Gulen. Took part in the action in Valdres in 1940. Went across to England in 1941 and was sent on a special mission from Scalloway on Shetland to Norway in December 1942. The boat was probably sunk by German planes off Træna. Article about him and his brother Georg in the newspaper Bergens Tidende in January 1945. 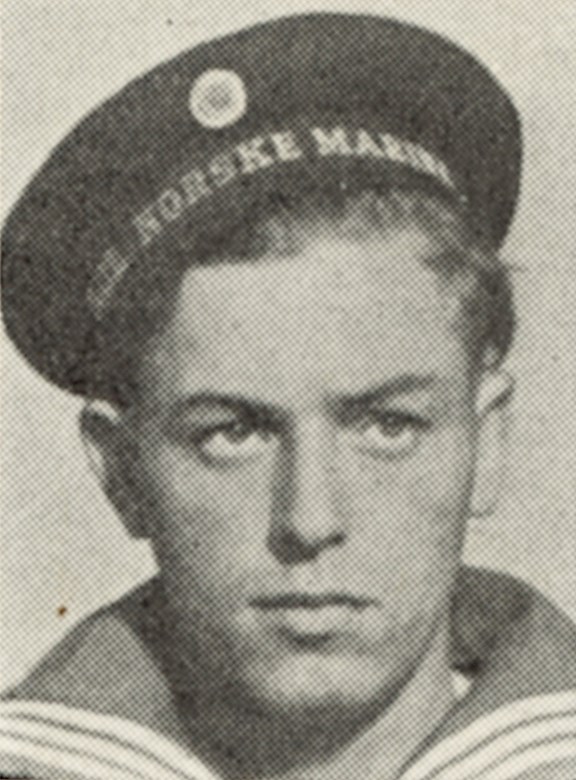 BYRKNES, GUNNAR MIKALSEN, seaman, Gulen. Born 11 May 1918 in Gulen, son of Mikal Andreassen, born 1871 at Austrheim, and Amalie née Søreide, born 1884 in Fjaler. Was motor man on MS Norne and lost his life on 1 August 1940 when the ship was torpedoed off Pentland Firth in Scotland. His brother Adolf lost his life at sea in 1941.

BYRKNES, ADOLF, seaman, Gulen. Born 2 June 1921 in Gulen, son of Mikal Andreassen, born 1871 at Austrheim, and Amalie née Søreide, born 1884 in Fjaler. Was fisherman until he went to sea in 1939. Served in allied trade. Lost his life on 2 March 1941 when SS Augvald was torpedoed in the North Atlantic. His brother Gunnar lost his life at sea in 1940.

BYRKNES, ENDRE BERNHARD EINEBÆRHOLM, stoker, Gulen. Born 26 January 1918 in Gulen, son of Kristoffer Einebærholm, born 1889 in Gulen, and Anna née Birknes, born 1894 same place. Went to sea in 1939, and sailed throughout the war in the merchant marine. Survived three torpedo attacks, twice in 1940 and once in 1943. Lost his life on 27 February 1946 when SS Hodnaberg went down off Hals on the Danish coast after hitting a mine. Buried at Gulen. Reference to him in "Redningsbaaden" no. 5, 1946. 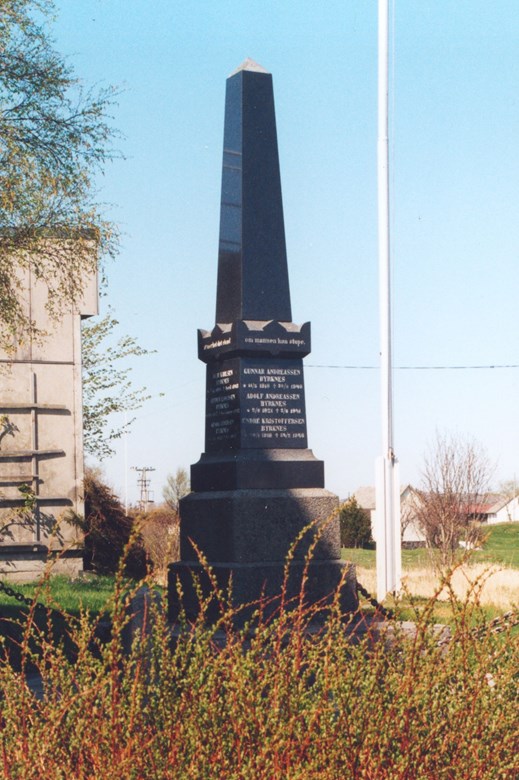 The memorial stone stands close to the school. Originally it stood close to the playground, but when this was extended, it was moved 30 metres to its present site. The memorial stone is encircled by metal chains between low stones placed in a square out from the base of the monument.
Owner: Fylkesarkivet i Sogn og Fjordane. - Date: 2001. - Photographer: Hermund Kleppa.
Fylkesarkivet i Sogn og Fjordane.
2001.
Hermund Kleppa.

The inscriptions are written on all sides of the monument. First there are words from those who erected the memorial, then the names, with two + three + two names on each section. On the four sides of the protruding section above stand the well-known words written by the Norwegian poet Per Sivle Og det er det store og det er det glupe, at merket det stend, om mannen han stupe (freely translated: And this is so good and this is so wise, that the standard will stand if the bearer he falls).
Owner: Fylkesarkivet i Sogn og Fjordane. - Date: 2001. - Photographer: Hermund Kleppa.
Fylkesarkivet i Sogn og Fjordane.
2001.
Hermund Kleppa.