Horten is located on the eastern side of the Aurlandsfjord, about 560 metres above sea level, and about one kilometre north of Nedbergo. It is possible to walk up to the farm from the fjord at the outlet of the river Kotningdalselva. It is also possible to climb up from a place south of the farm. The farm is very small and not at all easy to get to. For most of the period of some 150 years from about 1700, people lived on the farm. From the mid-19th century, the farm was used as a hayfield by a farmer from Undredal.

Horten seen from Stigen, on a ledge in the centre of the picture. The farmyard is located to the left of the infield. The cultivated fields are located above the infield, further into the forest.

New clearing of land about 1650

The land on the farm was cleared once more about 1650. In 1966, Peder was farmer and the land tax was one and a half kilos of butter. The fact that the farm was cleared so early may indicate that the place was settled in the Middle Ages. North of the farmyard and the mountain ridge is a place called Øygardskåri. If it is true that the name Øygard (meaning "deserted farm") refers to Horten, this may indicate that there was a settlement in the Middle Ages. It is not far from the farm and east to the reindeer territory, and in ancient times the people on the farm have probably combined farming and hunting.

About 1698, Elling ran the farm, but he was not the owner. In 1698, he had five cows, one ox, eight sheep, seven goats and four billy goats. Elling may have used the billy goats to transport goods. There were not many implements on the farm, and his debt to the owner and others was just as high as his total income.

In 1701, the brothers Botolv and Hans Olsen Lagmannsås bought the farm from Torbjørn Vinjum. The land tax was now three times as high as in 1666. This shows that the farm must have been considerably developed. After a few years, the two brothers moved to Stigen, and the Horten farm was deserted until about 1730. Since that time, the operation of the farm became more stable, but whenever one farmer quit, new people came to the farm.

Down by the fjord, from the boundary to Nedbergo and north to the river of Kotningdalselva, there is a field that used to be called Fretheimsteigen. It was the owner of the Fretheim farm who bought this field about 1750 and used it to get firewood and hay. There was some disagreement concerning this field, both in terms of boundaries and property ownership. About 1785, the farmer of Horten did not want to pay the rent that the owner demanded. It ended up in a court of law with statements from witnesses and an inspection tour to check the boundaries. The farmer from Horten lost the case and had to pay 12 "dalar" to the owner, the farmer at Fretheim.

Åmund and Gjertrud came to Horten about 1780, and now the farm was much improved. Åmund had been a tradesman in his younger years, and he had been able to save some money. About 1800, there were 6-7 cows, 15-20 sheep and goats, as well as a horse on the farm. The grain harvest was good, 8-10 barrels, and they even had their own mill. When Åmund died in 1804, he left a fortune of 559 "dalar". The people on this small high farm had become prosperous.

In 1805, new people once more came to the farm. It was Torbjørn Torbjørnsen and his wife, Angunna Knutsdotter. For a while Torbjørn worked as a teacher and lead singer in the Undredal church, and on some occasions he was given good recommendations from the vicar. However, running a small high farm in the years after 1800 was heavy going, and in 1827, Torbjørn had amassed a debt of 110 "dalar" to Jens Svendsen Dyrdal. Torbjørn and his wife had one son, also called Torbjørn. In 1827, he married and the couple took over the farm. They had seven children and lived there until 1865 when they all moved to Lidal in Fjærland. 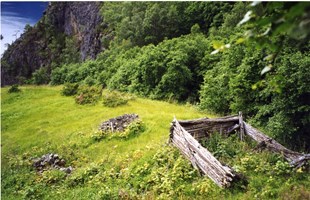