On an oval-shaped stone on a grave at Fjærland church we find this inscription: GEORG DISTAD * BORN 18. June, 1915 * DIED IN ACTION IN * VALDRES 28 APRIL, 1940 * FOR HIS COUNTRY * IN GRATITUDE. Distad was buried in Valdres and the family erected a gravestone. In 1942, his coffin and gravestone were moved home to Fjærland. 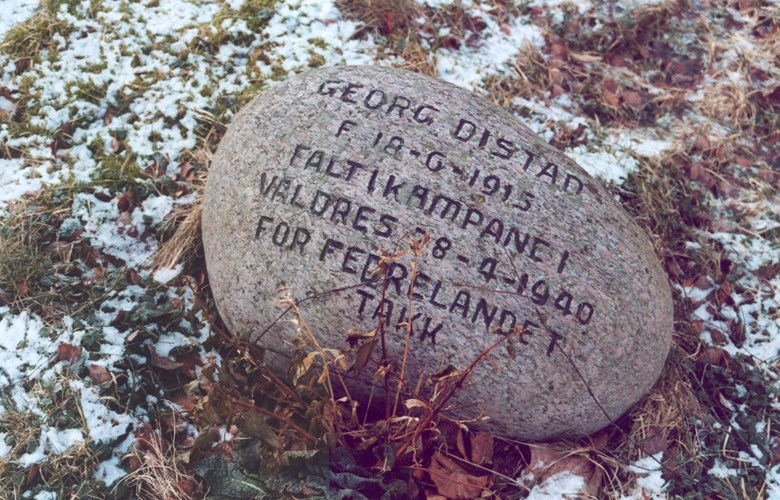 The memorial stone on Georg Distad's grave on the churchyard in Fjærland.

Georg Endreson Distad was born on 18 June, 1915 in Balestrand. With about 4000 others from the Fjordane Regiment (IR 10), he took part in the action against the German invasion forces in Valdres. He served as a driver in a machine-gun platoon when he was fatally wounded by shrapnel on 28 April in the Bagn area and died shortly afterwards. His fellow soldiers had to take him all the way up to Vestre Slidre where he and several others were buried on the churchyard at Aurland church.

Eulogy at the local council meeting in Balestrand

On 9 August, 1940, a local council meeting was held in Balestrand. The mayor, Anders L. Gjerde, opened the meeting with an item not listed in the agenda. He wanted to pay tribute to two men from Balestrand who had sacrificed their lives for their mother country. The following words are written in the minutes:
"Before the councilmen started on the agenda for the meeting, the mayor rose to speak. With warm and sincere words he paid tribute to the memory of the two men from the municipality, mate Ingvald Olsson Vangsnes and seaman Georg Endreson Distad, who died in action in Norway in the spring of 1940. The mayor also expressed his deeply felt gratitude to both of them for having sacrificed the most cherished thing a person can have, his life. The local council listened to the eulogy standing.
On a suggestion from lieutenant Hans J. Bale, the municipal council decided unanimously that pictures of the two killed in action would be hung up in its meeting room."

Most likely the two pictures were never hung up on the wall. Barely two months later, the Reich commissioner Josef Terboven introduced his own completely undemocratic and Nazi-controlled municipal management. Consequently, it was out of the question to hang up pictures in the meeting room of Norwegians who had lost their lives defending their country against the German occupation forces.

The grave moved home to Fjærland

The family looked after Georg¿s grave on the churchyard in Valdres. They soon put up a grave memorial in the form of a cement stone with a name plate. At the same time, however, they wished strongly to move his grave back to Fjærland. In February, 1942, three close relatives, the two brothers Einar and Hans, and their cousin Ivar Bøyum, left for Valdres to see what they could do about moving the grave. It took some time, but after a few days they transported the coffin and the gravestone on a truck to Lærdal, and then by boat to Fjærland. The local steamship company ¿Fylkesbaatane" paid their last respect for this "second funeral party" by not charging anything for the transportation.

The gravestone was replaced

The cement stone from the grave in Valdres lasted until about 1960. Then it was replaced with a new one because the stone was about to crumble. It was Erik Distad, Georg¿s nephew, then living in Bergen, and Georg¿s sister Gunhild and her husband, living at Hordnes in Fana, who picked out a stone on the shore close to the naval station of Haakonsvern.

Ceremony at the grave on 17 May

Since 1990, it has become a tradition every 17 May to have a ceremony at the grave of Georg Distad, the only war grave in Fjærland. Flowers are put on his grave, and a commemoration speech is given.

Georg Distad's grave on the churchyard at Aurdal church. Georg Distad was buried there in 1940, and a cross with his name was at once put on his grave. Later on his family raised a gravestone. In 1942, the coffin and the gravestone were moved back home to the churchyard in Fjærland. In 1960, the old gravestone was replaced with the present stone.
Owner: Georg Distad. - Date: 1940. - Photographer: Ukjend.
Georg Distad.
1940.
Ukjend.

In 1995, a memorial stone was raised in Aurdal to commemorate those who were killed in action there. It is Hans Distad, Georg's brother, who is standing by the memorial. In addition to the name of Georg Distad, we see the names of four others from the county of Sogn og Fjordane: Per G. Faleide, Innvik, Olav N. Hjelle, Nordfjordeid, Aksel Midtkandal, Gloppen and Halvdan O. F. Sæla, Naustdal.
Owner: Georg Distad. - Date: 1995. - Photographer: Ukjend.
Georg Distad.
1995.
Ukjend.
resources:
Våre falne. Oslo 1948.
Aas, Sverre: "Sogningane rykkjer fram". I Årbok for Sogn. Nr. 32, Sogndal 1986.