"The youths from Sunnfjord will some time in the 20th century spend time and efforts in erecting a stone by the shores of Svanøy in memory of Hans Nielsen Hauge and his friend, Ole Torjussen Svanøe." This Alhed Schou wrote in 1912 in the book "Svanøen i Søndfjord", and in 1954, a memorial was erected, but not quite by the youths of Sunnfjord. 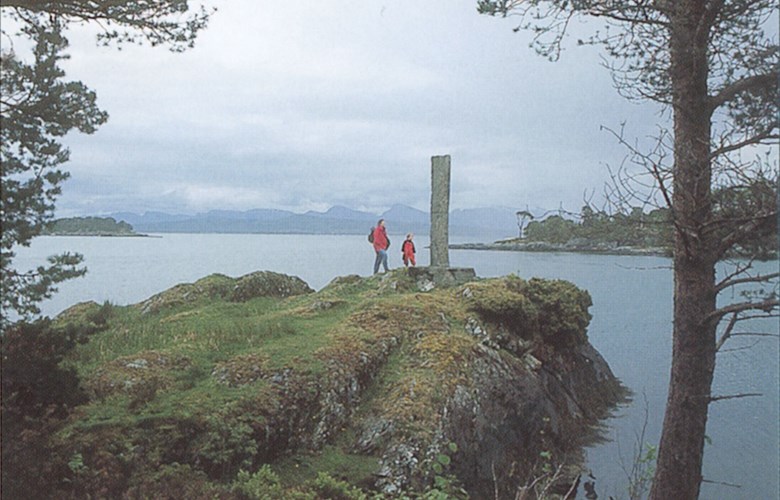 The memorial stone commemorating Ole Torjussen Svanøe and Hans Nielsen Hauge on the island of Svanøy is located on the point of Saltverkneset with a view towards Svanøybukta, Brufjorden and Stavanglandet.

At the point of Saltverkneset

The memorial is erected "by the shores of Svanøy", on the north side of the island and highly visible at the point of Saltverkneset. The memorial stone was erected in 1954 by the family, 150 years after Ole Torjussen Svanøe came to Svanøy. The stone is 3.5 metres high, with a width of about 60 centimetres. At the front, facing the bay of Svanøybukta, the year 1809 is carved. In an arch above the year it is written:
HANS NIELSEN HAUGE 1771-1824
And in an arch underneath: OLE TORJUSSEN SVANØE 1781-1859
The names and the dates form a circle with the year 1809 at the centre.
At the back it is written: Raised by the Svanøe family 1954 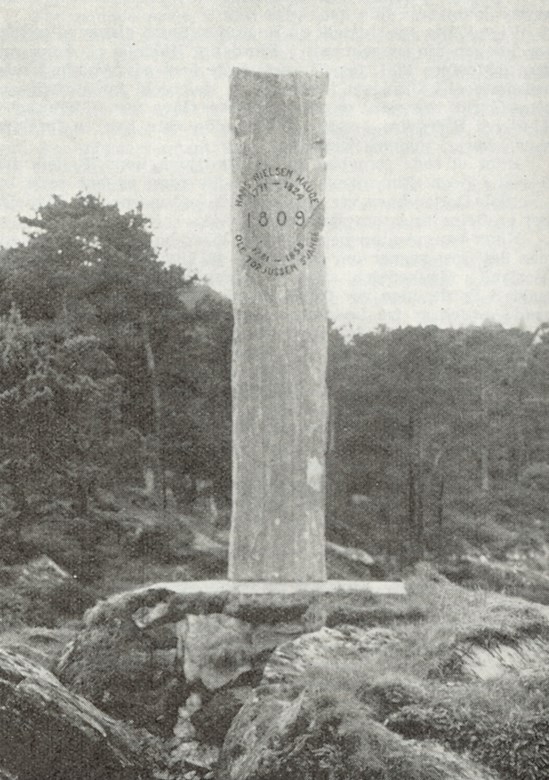 Bishop Andreas Aarflot writes: "Hans Nielsen Hauge [1771-1824] emerged at a social and cultural time of unrest, where national ideas and popular currents made the societal structure of the old established autocracy creak in its foundations. Hauge's personality was marked by many contrasts. He had inherited his share of the class differences that generations before him had grown up in. At the same time, he felt close to the new currents and ideas of the times. Throughout his activities of awakening people into action, and as an industrialist and a social reformer, he contributed to speeding the process of change that had barely started at the time he was born. In the Norwegian church he became the originator of the most comprehensive renewal ever."
Hans Nielsen Hauge created a nation-wide, profound and prolonged movement, marked by spiritual awakening and material progress. Part of the explanation can be found in a network of competent co-workers around the country. Many of these later became important members of the rural community as well as members of the Storting (Parliament). One of these lived at Svanøy. 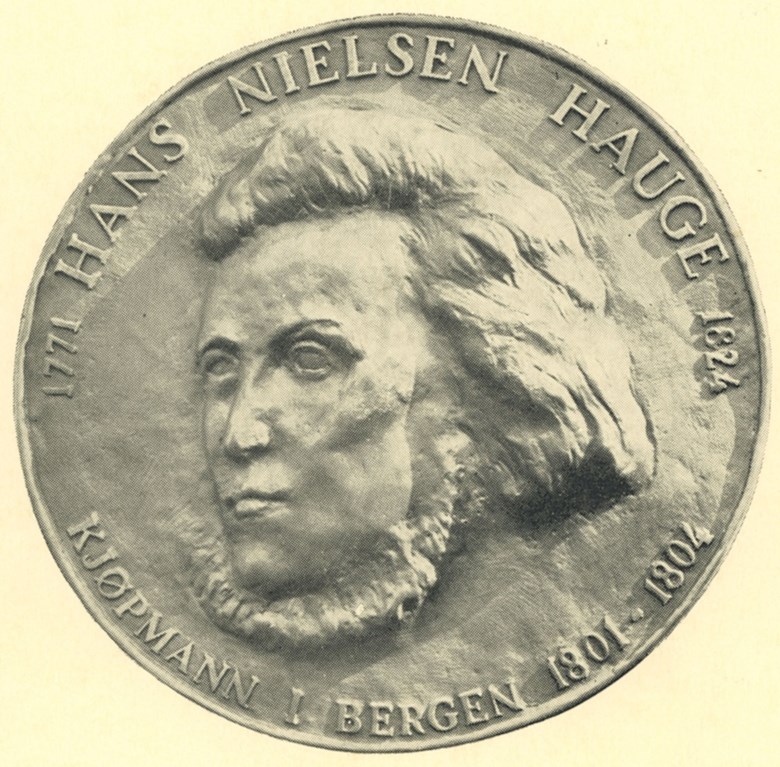 Ole Torjussen Svanøe, born 28 March 1778 at Helling in the valley of Hallingdal, was son of farmer Torjus Olsson and Asbjørg Torsteinsdotter Stave. He was married to Kjersti Åmundsdotter Korsbøen from Modum.
Ole met Hans Nielsen Hauge in 1801, and later became one of his closest friends. It was on Hauge's advice that Ole bought Svanøy in Kinn in 1804. He came to Svanøy at Whitsun the same year, and took Svanøe as his family name. Erik Olsen (1781-1861) from Ål accompanied him as his servant.
Ole Svanøe was an energetic and intelligent man. Besides establishing a sawmill, flourmill, shipyard, and a salt-extracting facility on his property, he was also a tradesman in Bergen. He wrote and published a number of educational pamphlets. Svanøe represented the county of Nordre Bergenhus Amt (the present county of Sogn og Fjordane) for five terms, in 1821, 1824, 1827, 1836 and 1842. In addition, he was a deputy representative in 1818 and 1833.
Ole Svanøe died on 29 December 1859 and was buried on the Svanøy graveyard. 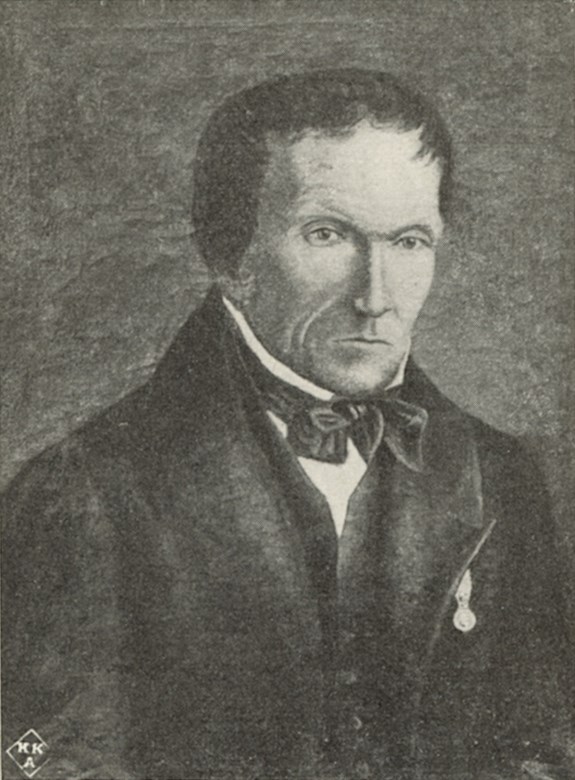 Svanøy - a centre for the lay Hauge movement

Svanøy was a stronghold for the Hauge movement in Sunnfjord with Ole Svanøe and his son Christopher as its main leaders. People travelled to Svanøy to seek advice, comfort and help, in spiritual matters and in many other issues of a more practical nature. He travelled around in the region of Sunnfjord to preach the word of the Lord and guide people.
Tingneset in Vevring was another "haugianer" centre. Lars Jakobsson, owner in the early 19th century, was a close friend of Hauge's, and in 1830, Erik Olsen bought Tingneset, the servant boy from Ål who came to Svanøy in 1804. He was also an itinerant preacher. 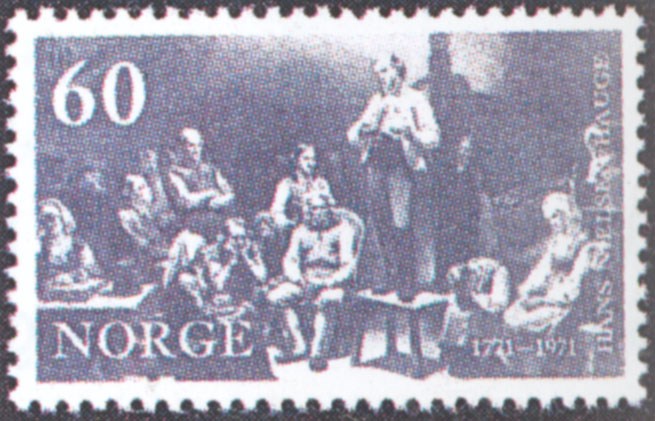 The memorial stone at Saltverkneset, erected in 1954. Hauge was imprisoned in the years between 1804 and 1814, but was released for some months in the "famine year" of 1809 to travel around in the country to help people extract salt from the ocean. He came to Svanøy, too, where he helped Ole Torjussen to improve a salt-boiling facility they had built some years earlier.
Owner: I <i>Jol i Sunnfjord,</i> 1956. - Date: Ukjend. - Photographer: Ukjend.
I <i>Jol i Sunnfjord,</i> 1956.
Ukjend.
Ukjend.

Portrait medallion of Hans Nielsen Hauge made by the sculptor Sofus Madsen (1881 - 1977). The portrait is based on a painting that was discovered in Copenhagen in "recent years". It shows Hauge in his thirties, and it is the only painted portrait of him when he still lived. The medallion is placed on a memorial plaque at the Krosskyrkja church in Bergen in 1971, in connection with the 200th anniversary of Hauge's birth.
Owner: I <i>Bjørgvin.</i> - Date: 1971. - Photographer: Ukjend.
I <i>Bjørgvin.</i>
1971.
Ukjend.

In 1839, Ole Torjussen Svanøe (1781-1859) published the booklet "Faderlige Raad til mine Børn" (Fatherly Advice to my Children). In this booklet, he urges his children by constantly repeating the biblical admonition of first to "seek the kingdom of God, and all these things shall be added to you" (from Luke). But the material goods do not come out of nothing. The recipy is work. "Beware of idleness!" is one piece of advice he offers. "Whoever cultivates the soil, heaps up his harvest".
The medal hanging by his left lapel may be the "Medal for civic service" that Svanøe received in 1821. In Florø a street has been named after him - Ole Svanøes vei.
Owner: I <i>Svanøen i Søndfjord.</i> - Date: Ukjend. - Photographer: Målar: Ukjend.
I <i>Svanøen i Søndfjord.</i>
Ukjend.
Målar: Ukjend.