Around 1950, a big slab of stone with an old inscription was found in the Askvoll churchyard. The carved letters CIS matched <b>C</b>hristen <b>J</b>ens<b>s</b>øn, vicar at Askvoll 1636-1653, and the author of the first dictionary of words from spoken Norwegian. Today, the stone in the churchyard stands in memory of Christen Jenssøn and his dictionary. 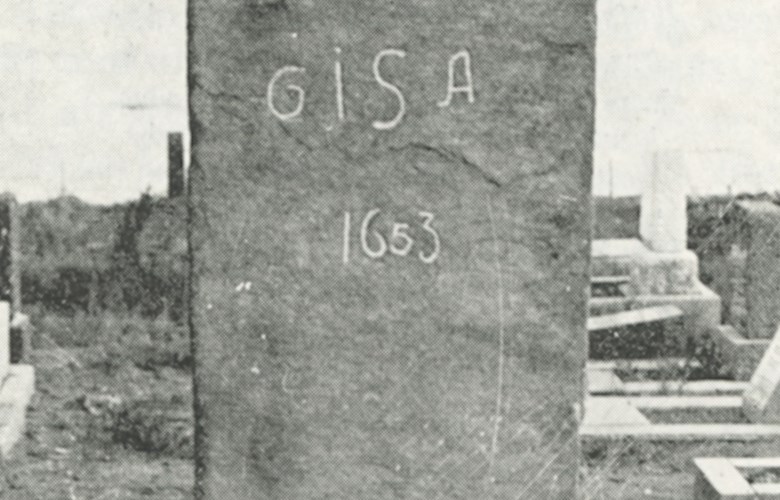 The two-metre-long slab of stone with the letters CISA on one side was discovered around 1950. Since the letters match the name Christen Jenssøn (Askevold), people of the history association and the vicar at the time thought that the stone is linked to this man. They added the letter A (Askevold) and the date 1653, the year when Jenssøn died, and had the stone erected in front of the entrance to the church at Askvoll.

The old slab of stone with very old characters appeared during a comprehensive restoration project. On one side CIS could be read, on the other, with reservations, GBDK ANNO 1735. The letters CIS aroused most interest. They matched the name of the well-known author of the dictionary, the vicar Christen Ienssøn!
The history association and the vicar at the time became so convinced that the slab was put on Christen Jenssøn's grave once, that they first made an additional inscription, the letter A (for Askevold) and the year 1653, and then had the stone lifted into a vertical position on the south side of the road up to the church.

All his time at Askvoll

Christen Jenssøn (approx. 1610-1653), vicar and author of dictionary, was born at Askvoll. He studied at Copenhagen University, was a chaplain with his father, vicar Jens Mauritson at Askvoll, and became vicar after his father in the same office. On Midsummer Day 1653, he drowned with his crew on his way home from one of the parish churches, at Vilnes or Hyllestad.

In 1646, Christen Jenssøn published the dictionary "Den Norske Dictionarium eller Glosebog" (the Norwegian dictionary or book of words)", the first dictionary with words from spoken Norwegian. It contained more than 900 entries with explanations in Danish, a drawing of the primstaff with an overview of important days, in addition to a great deal of information on culture, history, and language.

In his preface, the author explains why he wrote and published the book:
"Oc paa det voris gode og gamle Norske Sprog --- diss klarligere kunde komme for Dagen oc for de andre adskillis --- da haffuer jeg for den Aarsag skyld vildet dette mitt Arbeyde alle forbemelte gode Norbagger til tienste paa Trycken lade udgaa." (and for our good old Norwegian language --- could come to light more clearly and be different from the other --- then I hope for this reason that my work will be of service to all good Norsemen when I publish this in print).

The original dictionary published in 1646, later became important for linguistic research and for linguists. It cannot have been printed in many copies. As early as around 1750, it was rare. In 1915, Den norske historiske kildeskriftkommission (the Norwegian commission of original documents) republished the book with an introduction and comments by the professor of linguistics Torleiv Hannaas. A new edition came in 1946. In 1996, 350 years after the original, Askvoll municipality published an edition by the teacher Ragnar Bull, based on the research he had done in 1995. Bull's book has 48 pages, and the front cover has a facsimile of Ivar Aasen's original copy, "printed in Copenhagen in the year 1646".

Examples of entries in the Ragnar Bull edition

Before his 1915 edition, the linguist Thorleiv Hannaas examined if the words in the original edition from 1646 still existed. He writes, "The majority of the words are still in frequent use, although one or more could be forgotten or changed." Ragnar Bull looked into the same question in 1995, and he included in his edition the original word explanations, in addition to what Hannaas found in 1915, and what he himself found in 1995. Here is an example:
Jype are called the red berries which grow on thorn bushes, when the roses have fallen off.
1913: "ei jupe" (Bulandet and in other places).
1995: "ei jupe", in common use (Askvoll, Atløy, Bulandet, Eimind, Holmedal, Melvær, Mork, Stongfjorden, Værlandet); "we must go picking jupe" (Eimind); "there were a lot of "jupe" on the thorn bush" (Mork).

The Askvoll year of cultural heritage 1997

During the cultural heritage year 1997, Askvoll municipality chose Christen Jenssøn's dictionary to be the cultural relic of the municipality. There were around 40 suggestions, and it was the Hovudutvalet for kultur og næring (council of culture and industry) who on 30 May 1997 made the decision.

The title page of "Den Norske Dictionarium Eller Glosebog, Udi huilchen indeholder mange Norske Gloser oc daglige-Tale ---" (the Norwegian dictionary or book of words, which contains many Norwegian words and everyday speech ...) The book was not printed in many copies, and already in the 1700s, it was considered very rare, or "Liber rarissimus". This front cover is from Ragnar Bull's edition from 1996. He had been able to lay his hands on a copy of the front page of Ivar Aasen's copy.

The Christen Jenssøn stone in 2001, seen from behind. Here are carved characters as well. Wear and tear is the reason that the characters are not very distinct. Ragnar Bull, Holmedal, thinks they read: GBDK ANNO 1735. He likes to think also that the stone has been used twice, first over CIS in 1653, and then, in 1735, over another person. In 2001, the stone slants a little toward the west, compared to its original position.
Owner: Fylkesarkivet i Sogn og Fjordane. - Date: 2001. - Photographer: Hermund Kleppa.
Fylkesarkivet i Sogn og Fjordane.
2001.
Hermund Kleppa.
resources:
Jenssøn, Christen: Den Norske Dictionarium Eller Glosebog. Ved Ragnar Bull. Askvoll 1996.
Loftheim, Abraham: Askvoll Bygdebok. Bind I. Førde 1963.
Lothe, Anders A.: Målreisingssoga i Sogn og Fjordane. Stryn 1950.
Norsk Allkunnebok. Oslo 1954.