In the summer of 1956, the temperance people in the municipalities of Brekke and Gulen met at Rutledal. There was a special solemn atmosphere that day. A memorial stone for Ivar and Andrine Svardal was unveiled. Svardal founded one of the first temperance organizations in Sogn. 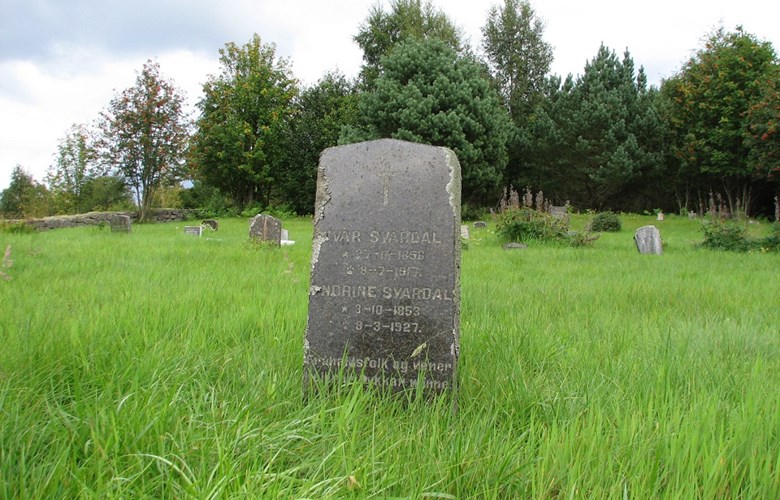 The grave of Ivar and Andrine Svardal on the old graveyard at Rutledal. The memorial stone was raised in 1956.

The memorial stone
There are two graveyards at Rutledal. The old one is located to the north of the road to Sygnefest, about one kilometre from Rutledal, close to a road down to the sea due north of the lake of Brosvikvatnet. After the new graveyard was taken into use, the old graveyard is used only on special occasions.

Ivar and Andrine Svardal are buried in the centre of the old graveyard. The memorial stone is made of a dark rock with a polished front. The stone has the following inscription:

Ivar and Andrine Svardal
Ivar Andersson Svardal, teacher, born 27 November 1856 at Svardal, was son of Anders Ivarson Svardal and Johanna Rognaldsdotter Glenja. He was married at Rise on 4 May 1880 to Andrine Monsdotter Sygnefest, born 3 October 1853. They had one son, Mons Andreas, born 19 November 1881. 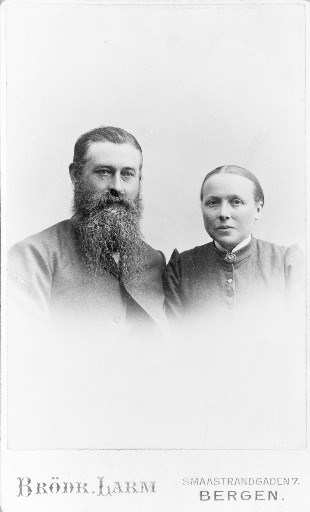 About 1880, Ivar Svardal bought about one acre of outfield called Myra under the farm of Vatne. He was then a teacher at Strendene. Svardal named his property Solheim. They built a house and cultivated enough land to feed a cow and some sheep.

Ivar Svardal was a respected teacher and was well known for his work in the temperance movement. He died on 8 July 1917 and was buried at the Rutle graveyard. Andrine died on 8 March 1927.

The unveiling ceremony
About 1950, there was a tradition that temperance people from Brekke and Gulen met every year. In 1956, it was the Brekke people's turn to organize the annual meeting at Rutledal. There was a special item on the agenda for the day: the unveiling of a memorial stone on the grave of Ivar and Andrine Svardal. The clergyman Lunde gave the unveiling speech and removed the flag from the stone. The chairman of the Sygnefest temperance organization, Lovise Rise, laid a wreath and gave a commemorative speech. Andreas Sørestrand laid a wreath on behalf of the Sogn district of "Det Norske Totalavholdsselskap" (DNT). Other wreaths were laid from the national board of DNT and from the Gulen school board. Ivar Svardal thanked everybody for the honour that had been shown to his grandfather in this way.

Commemorative poem
In the afternoon there was a meeting with speeches by the teacher Gullanger, Sigv. Helle, Andreas Sørestrand, and Bjarne Haugland. Elling E. Kjelby had written a commemorative poem. The third stanza goes like this:

(freely translated): From Gulen and Brekke we send you our warmest thoughts For our cause you so ardently fought When we here raise a memorial on your grave We thank you today for everything you gave Sygnefest or Vik?
Where was the first temperance organization in Sogn founded? According to the article on the unveiling ceremony in the local paper Sogn og Fjordane, Sygnefest came first, founded by Ivar Svardal.

However, according to another source, Vik seems to be the first. Asbjørn Kloster established the first temperance organization in Stavanger in 1859. Two years later, the "Bergens Totalafholdsforening" was founded. In the annual report for DNT in 1882 there is no reference to any DNT organization in the county of Sogn og Fjordane. In 1885, "Vik i Sogn" was the only organization in the Bergen district.

Administrative development
In 1872, all the DNT organizations from Rogaland up and including Sunnmøre united into a district association. In 1883, the district was re-organized when Sunnmøre was added to the Romsdal district. Bergen and the two "Bergenhus counties" (the present counties of Hordaland and Sogn og Fjordane) constituted the Bergen district of the DNT. Six years later, Sogn og Fjordane separated to become a district in its own right. In 1896, this district was once more split up into two districts: Sogn and Fjordane, and, finally, in 1907, the Fjordane district was split up into Nordfjord and Sunnfjord, and the term county was used instead of district.