Steinen became the port of call for Førde. Several activities grew up here, for example the first manufacturing industries. Yet, like so many other boat stops, Steinen had its golden age only so long as the boat services operated regularly, and it has in our time lost its importance in Førde. 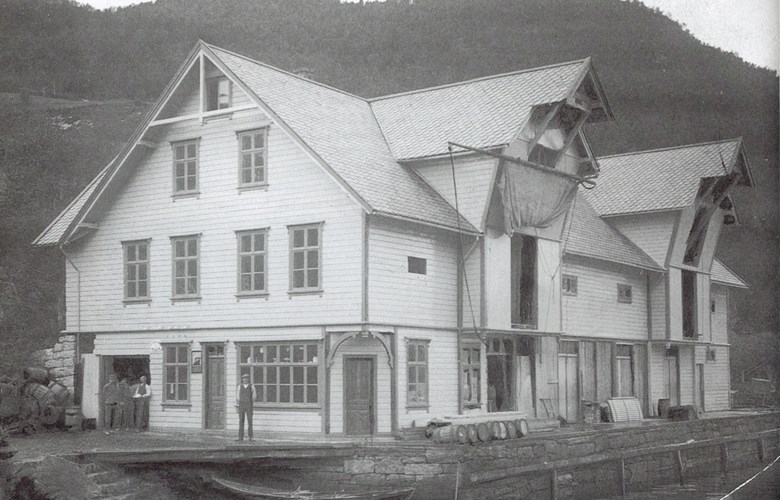 The boat stop Steinen before 1920. Several people in front of a house with a shop. Barrels are neatly stacked at the quay, and some rowboats are anchored.

In the 1860s, a road was built to Steinen, after pressure also from Jølster. The quay was finished in 1868, but soon after it collapsed, and a new quay had to be built. The quay was so important that Fylkesbaatane (steamship company) got involved in the project, a rare occurrence. From 1868 to 1990 Steinen was an important port of call for the steamship service of Fylkesbaatane.
The first shipping agent here was Anders A. Steen from Holsen in Førde. His son, Ole A. Steen, took over. He expanded the activity to include timber trade and groceries, and he had a new house built in 1879, with storage space for the agency, a shop, and a room for travelling people to stay overnight. A large warehouse also belonged to the agency. Public funds paid for a shed and a stable, since days often went by before animals could be transported. As the traffic grew, a new quay and bigger houses were required. A post office and a telephone exchange were set up, and a new economic activity, the production of fish barrels.
In 1916, the third generation took over, and Anton under the company name of A. O. Steen ran the earlier activities and expanded them to include trade in brick and slate, and a case factory. 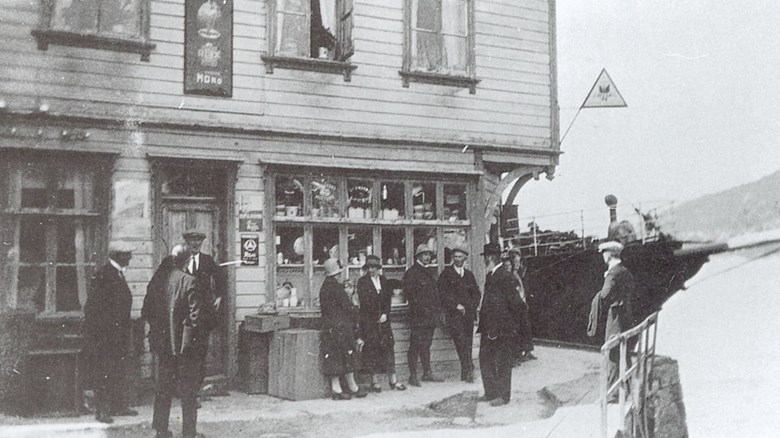 Anton's brother, Emil, ran the barrel factory, and he had two vessels for fish trade and for freight service, the motor vessels "Evigheden"(eternity) and "Sigurd". He took over the barrel factory in 1915, the first real industrial company in Førde. As was the case for many other barrel factories, the times were good during and after the First World War, then came crisis and winding-up of the business in the 1920s. In 1923, Emil Steen was declared bankrupt. His brother Anton took over, and he operated the factory until 1928.
At Steinen Mathias Leivestad started up a wool spinning mill in 1918, and in 1937, the mill was moved to new premises at Halbrend. 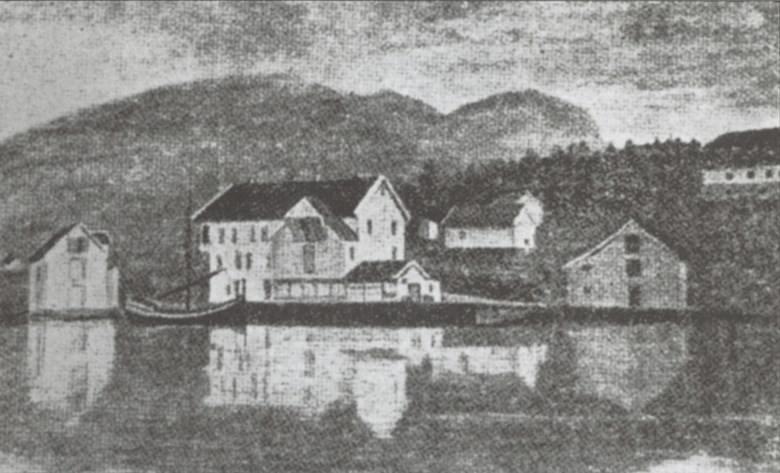 From centre to periphery

From 1917 to 1923 a new quay and a new warehouse were built, and the road as well as the site were expanded. The traffic in the 1920s and the period after was the highlight of activity at Steinen. At this time around fifty persons were employed here. Between four and six men were needed to serve the ships. In addition, there were the workers at the barrel factory and the spinning mill. At times there were from 800 to 1200 bags in a boat load. In 1918, Steinen was the busiest steamship agency: about 500 animals, 2000 packages of meat, as many kegs of butter, 2500 bags, and 3500 cases of other goods. During the next two to three decades the traffic did not increase much.
Rarely did such a diverse economic activity grow up around a boat stop. But a centre was not built up here. Steinen remained in the periphery of the centre of Førde, which had more space and started its growth during Steinen's busiest period.
The western part of the quay at Steinen was extended in 1974, but at this time the ships were served on the eastern part. Big quantities of materials and goods arrived in connection with the expansion and growth of Førde. Yet the traffic by sea was on the decline, and the agency was shut down in 1990. The last agent was Arne Steen, the fifth generation of the family Steen at Steinen since 1868.

At Steinen there was also industrial activity. The barrel factory was taken over by Anton Steen in 1915. In 1917, the workers in the picture were on Steen's pay sheet. At this time 20 men in all were employed at the factory for shorter or longer periods.
Owner: Sunnfjord Museum. - Date: Ca. 1917. - Photographer: Ukjend.
Sunnfjord Museum.
Ca. 1917.
Ukjend.
resources:
Førsund, Finn Borgen:Dampen og kaia. Selja Forlag 1998.
Førsund, Finn Borgen:Førde bygdebok. Gardssoge og soga om folket. Førde kommune 1990.