At Nord-Vågsøy church, there is a memorial for fishermen who are lost at sea. It was erected by local people in 1998. 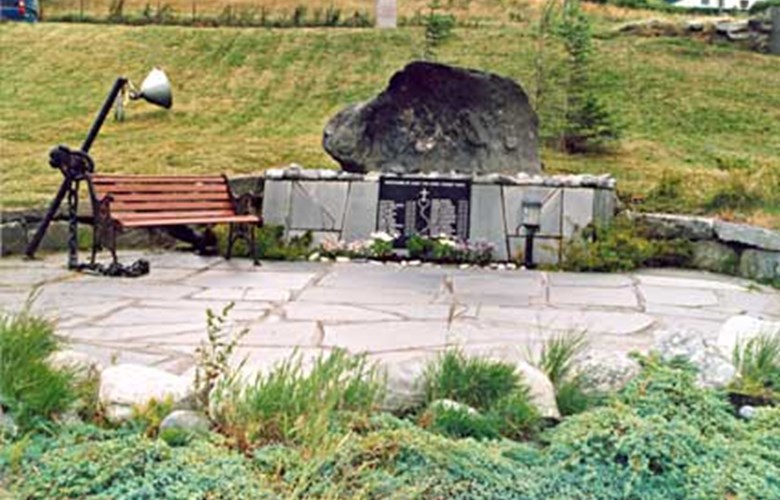 The fishermen monument at Nord-Vågsøy church, unveiled in the autumn of 1998.

The fishermen memorial on the churchyard at Nord-Vågsøy church is composed of a big, naturally formed rock placed on a foundation with a name plaque. Around the wave-shaped rock there are smaller rocks collected from the shores of Nord-Vågsøy. From the foundation runs a low wall out to a semi-circle field with slates in front of the memorial.

On the name plaque, the text on top says LOST AT SEA FROM NORD-VÅGSØY PARISH, then the names with age and year they were lost, and underneath, the words REST IN PEACE

Special rock and problems of location

Peder Kvalheim, Sigurd Kvalheim, Kjell Oldeide and Klaus Fagerlid organized the work of erecting the monument. They raised 70 000 kroner, and many people volunteered to help with the work.

The rock is unique and the story behind the location is also special. They searched the beaches and shores all over Nord-Vågsøy without finding a suitable rock. However, at the top of the mountain of Kvalheimsfjellet, Sigurd Kvalheim finally found the rock they were looking for - a rather big rock, formed like an ocean wave.
Primarily they wanted to erect a memorial on the churchyard, which the churchyard management objected to at first. However, they could raise the monument outside the churchyard, or they could place 25 small rocks inside. This was not acceptable to the committee. An important point of erecting a dignified memorial on the churchyard was that the bereaved could have a "grave" to go to. Luckily, as one of the committee members put it to the press in connection with the unveiling ceremony, they came to their senses so that everything was settled the way the committee wanted it.

The memorial was unveiled on 10 October 1998. It was a moving and fine ceremony in the church and on the churchyard. Sølvi Silden, who became a widow after the fishing boat "Stålhav" was lost in April/May 1993, unveiled the memorial, expressing her gratitude for the erection of the monument. Berit Silden, daughter of Birger Silden, one of the nine who were lost in January 1971, when the fishing boat "Seilfjell" went down, laid a wreath, saying:

- The heaviest burden to bear for those who have lost some of their dearest and nearest at sea, is to have no grave to go to.

The choir "Stormklang" participated with the song "Fiskaren" (the Fisherman), written specially for the occasion by Sigbjørn Hals with a melody by Frode Helgestad.

The years on the plaque show that 1901 and 1971 were the years with the worst disasters. In February 1901, five men died on the boat crew of Øystein Eriksson Refvik. Olav Jonson was lost when a breaker filled his boat while he was putting out a longline. Didrik Kvalheim lost his life when he fell down a cliff.

On 5 January 1971, the longline boat "Seilfjell" from Silda went down on the Viking bank. Six out of a crew of nine came from Silda.