"Youths erected this stone in gratitude for your loyalty to many good causes". These words are carved into the memorial stone for Ragnar Melvær on the churchyard in Florø, unveiled on 13 June 1920. Melvær died at the young age of 33, in the midst of his work with many "good causes": the liberal youth association, the temperance movement, the "nynorsk" language movement, and the rifle association. 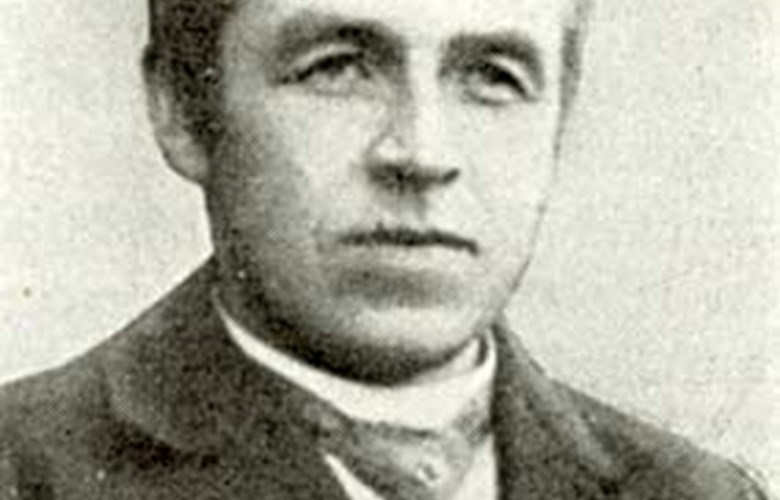 Ragnar Melvær, born 28 May 1880 at Gloppen, son of teacher Elias Abrahamson Melvær (1848-1924) and Karen Dortea Tomasdotter Hindøy (1850- died before 1900), both from Askvoll. Ragnar grew up at Kinn (Flora) where his father bought the farm Krokane in 1893, and became a shipping agent for the local steamship company Fylkesbaatane. Ragnar helped his father at the farm and at the quay, and became himself a farmer and a shipping agent during his last few years. Ragnar Melvær was married to Josefine Rasmusdotter Samuelsen (born 1881). He died on 18 November 1913, only 33 years old.

Ragnar Melvær had very little formal education but he was a keen reader, and he had a fair knowledge of social and community affairs. "He was always bright, unbiased, and calm. He could articulate his opinions in a clear and nice way, both orally and in writing," someone once said about him.

As an ardent "nynorsk" language spokesman he took part in the foundation of Florø Mållag and the district association Firda Mållag, as well as taking part in the preparative work of establishing a separate bank for the "nynorsk" people called Landsbanken in Bergen, and also the Firda and Sygna Hostels in the same town. He was also a representative for the insurance company Andvake. His interest in the temperance movement also led him to take part in the foundation of the lodge Landkjenning in Florø in 1903. In addition, he was a board member in the Sunnfjord Ungdomslag and Sunnfjord Skyttarsamlag.

Ragnar Melvær was buried on the graveyard in Florø on 25 November with an unusually high number of people present. The headmaster of Sunnfjord Ungdomsskule (folk high school) Rasmus Øvrelid, said in his speech: "We have stormy weather today that makes the church creak, but Ragnar lies there so quiet and calm. This was also frequently the situation in his own life. There may have been storms, but he was so calm and steady, always with a smile on his face. He could control his strong will and his warm heart. He always used his will to promote something good. - In the school of life, in God's school, he had learned."

One of the wreaths came from the Kinn tax assessment board: "Melvær was the most powerful man on the board even though he did not have the right to vote there, as he was only a secretary for the board. The reasons for this were first and foremost his warm heart and compassion for the poor, in addition to his great sense of justice."

"to lift his memory out of the grave"

Folk high school headmaster Idius Nybø gave the unveiling speech, and said: "what characterized Ragnar Melvær, and was his greatest quality, was precisely this never-failing loyalty to the ideas that had captured his mind, ideas he had learned to love throughout his life. And this is - and has always been - the greatest quality in a man, that he in all things was loyal to the best in him, that he had the courage to be the father of his ideas, love them, carry them forward with all the power he possessed and suffer for them, if life demanded it."

And, finally: "Let the veil fall, and let the sun and the day give light to this monument which for future generations will lift his memory out of the grave. For your love of the people and the loyalty to what is best in you, may you rest in holy peace in Norway's soil. God bless your memory.

The memorial stone for Ragnar Melvær on his grave on the churchyard in Florø. The stone has a maximum height of 2.3 metres and the sides at the base measure 45 by 25 centimetres. The vertical inscription carved into the stone front: RAGNAR MELVÆR
The characters have been painted black, but as of April 2003, the inscription was unclear. The colour was almost gone, and the stone was partly overgrown.
Owner: Fylkesarkivet i Sogn og Fjordane. - Date: 2003. - Photographer: Hermund Kleppa.
Fylkesarkivet i Sogn og Fjordane.
2003.
Hermund Kleppa.