The business was established by Sigurd Løkeland in 1922. Its principal product has been canned crab, au naturel or as paste. Until the 1960s, canned crab was produced by 5-6 canneries in the county of Sogn og Fjordane. The number of factories fell, and in 1984 there were only five remaining in the whole country. 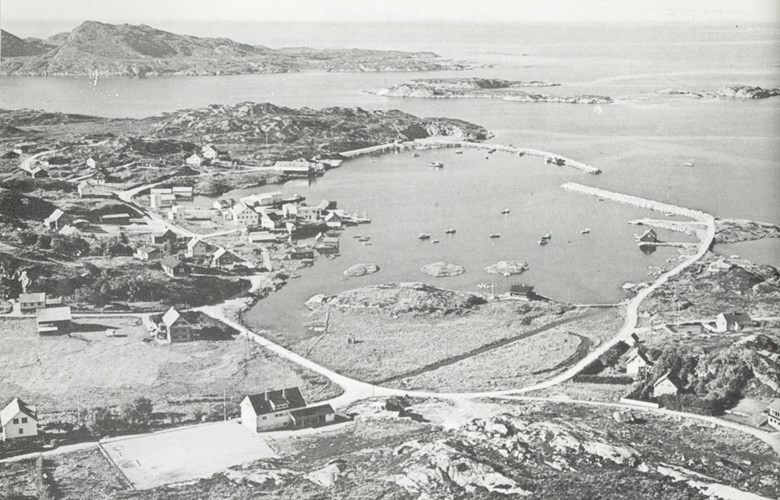 In 1930, Løkeland moved to Herland on the west side of Atløy and built a residential house and a business there. The picture shows Herland in the 1970s with the cannery centrally located on the harbour. The breakwaters were built in

Crab fishing was not operated on a large scale in Sogn og Fjordane before 1900. The crab was regarded as a plain article compared with the lobster. When the canneries were established, the demand for crab as a raw material increased. Sigurd Løkeland supplied the cannery at Sauesund with crab. In a short time he was able to sell his entire catch, and the idea of a cannery of his own appeared. In 1921, he went to a course in the production of canned crab at Øygarden in Hordaland. The following year he started on a small scale in a sea warehouse at Laukeland. The crab was boiled in tubs out in the open, and packed in the warehouse..

Sales in the eastern part of the country

After Løkeland had presented his first products to a wholesaler in Oslo, a whole year's production was sold. The eastern part of the country was his most important market during the first decades.

The factory at Herland

In 1930, Løkeland moved to Herland at Atløy, where he had a house built for residence and business. The canning took place in a rented sea warehouse. A new factory building was finished in 1947. After the war most of the business was sold to England.

The canning industry became a new source of employment for the women along the coast, and for most of them the only income. This was the case at Atløy when Løkeland Hermetikkfabrikk was started up. To start with, there were between 20 and 30 on the payroll, the great majority being women. The production season usually lasted from September to November. The daily hours varied with the supplies brought by the fishermen. The boiled crab had to be canned on the same day. For this reason the working day was long and erratic, sometimes lasting more than ten hours.

After the new factory became operational in 1947, the work force was between 50 and 90. In the 1960s they began to store the crab in cold storage plants. It was thus possible to prolong the production season well into February, and to plan the working hours better. But another consequence was that the work force in the crab production was reduced to around 30.

The founder active for 54 seasons.

In the 1960s Sigurd Løkeland hired facilities for the crab production at Mausundvær and at Sula in the county of Sør-Trøndelag. The business there was managed by his son Konrad and his wife, Anita Løkeland, up to 1976, when they took over the management of the factory at Herland. Then Sigurd Løkeland had 54 seasons of crab production behind him. In 2001, the third generation took over.

Canned crab on the decline

Toward the end of the 1960s, the good times of the crab canning industry were over. The crab supplies shrank, and, more importantly, the demand for canned crab fell and was gradually regarded as a luxury product. In the mid 1970s the industry was subsidized by the state. In the 1980s the sale of canned crab was organized through the firm of Norcanners. At this time, and also in the 1990s, Løkeland Hermetikkfabrikk was the only business left in Sogn og Fjordane canning crab. In the process, crab fishing, which used to be open, was now regulated by quotas.
Later, seafood has become more important. The most important product of the Løkeland business has been crab in shells, sold as fresh food to grocery chains. Canned crab has in later years been a small part of the production, but is now on the increase. In 2001, 16 persons were employed during the production season.

During the rich winter herring fisheries in the 1950s, the factory facilities were rented to a company in Bergen receiving herring. The facilities have also served as reception posts of salmon and other fish. All the years Løkeland ran a grocery shop, where his wife Laura Løkeland took an active part.

Until 1983, Løkeland sold his products in his own tins, both in Norway and abroad. Later the sale was organized through the firm of Norcanners, and all Norwegian canned crab was sold in the same packaging. The picture shows what the boxes looked like on the English market in the 1980s.
Owner: I <i>Kystbygdene skifter ham.</i> - Date: Ca. 1985. - Photographer: Ukjend.
I <i>Kystbygdene skifter ham.</i>
Ca. 1985.
Ukjend.
resources:
Førsund, Finn B.: Kystbygdene skifter ham. Åtte nærstudium frå Sogn og Fjordane. Kystlæremiddelprosjektet, hefte 3. Utgjeve av Sogn og Fjordane Distriktshøgskule. Sogndal 1985.
Litteratur nytta til artikkelen:
Tviberg, Th.: Artikkel i Firda. 08.10.1980.
Johansen, Karl E.: Fiskarsoga for Sogn og Fjordane 1860-1960. Universitetsforlaget 1982.