The Schreuder monument in Africa

The missionary bishop Hans Paludan Smith Schreuder (1817-1882), born in Sogndal, was the first Norwegian missionary in Africa. He started his missionary work in Zululand in 1850, working with the Zulu people until his death in 1882. In the autumn of 1915, a monument was erected on his grave in Untunjambili. The monument was consecrated the following year. 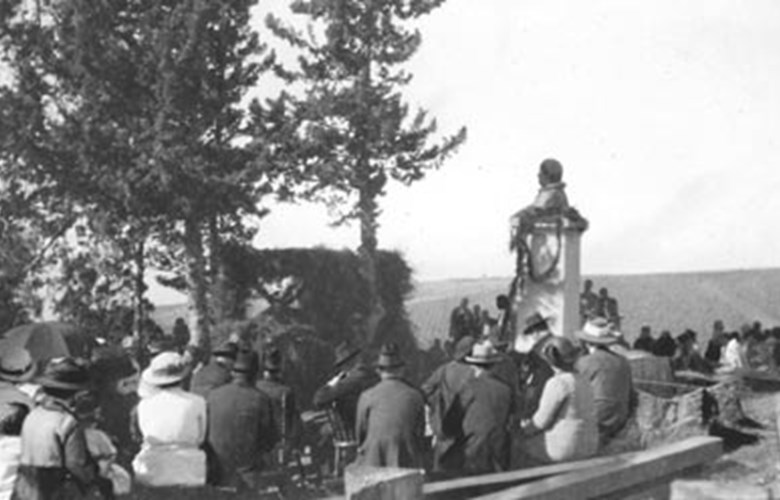 From the unveiling ceremony in 1916. The monument is decorated with greenery.

Hans Schreuder came to South Africa on New Year's Eve 1843 as the first missionary sent out by the Norwegian Missionary Society, founded in 1842. His call was to carry out missionary work among the Zulu people, but he was not allowed to enter their territory until 1850. With three other missionaries he founded the first mission station shortly afterwards, and by and by the missionary grew with new mission stations and new congregations throughout the area.

Schreuder also carried out much work with the Zulu language. He wrote a grammar (printed in Christiania - Oslo - in 1850), collected material for a dictionary containing three to four thousand words (manuscript), published a reader, and translated a number of articles into the Zulu language, as well as large parts of the Bible.

In 1866, Schreuder returned to Norway to be consecrated as "Bishop of the Mission Field of the Church of Norway". Some time afterwards, difficulties arose in the co-operation with the Norwegian Missionary Society, and in 1872, he broke the connection with the society. Schreuder carried on his missionay work among the Zulus in The Church of Norway Mission established by Schreuder, also known as the Schreuder Mission. He died on 27 January, 1882, and was buried on the graveyard at the mission station Untunjambili in Natal.

The Schreuder monument on his grave

In 1915, mission friends erected a monument on his grave in the form of a bust placed on a stone plinth with inscription. The bust was made in Norway. The memorial was completed in the autumn of 1915 and unveiled in the presence of the local congregation on 13 November the same year. However, it turned out that this was not the final commemoration ceremony. This took place in the spring of 1916, and, consequently, in the meantime the monument was only uncovered on Sundays.

The inscription is written in the Zulu language. Translated into English it says: HANS SCHREUDER * Apostle to the people of * Zululand * Was born in Norway in 1817 * arrived in Durban 1/1 1844 * he preached the gospel * to the people of kwa Zulu * until his death in Untunjambili in 1882 * The words here say 10.7 * To be remembered by "hambua" * the people

Beside the Schreuder monument in Africa there are three others in Norway. In the village of his birth, Sogndal in Sogn, a monument was erected in 1927 on the grave of his mother, Anna Cathrine Schreuder, and, in 1992, mission friends erected a monument at Stedje church in Sogndal. On the same day a memorial plaque was unveiled on the wall of the house where he grew up.

The School of Mission and Theology in Stavanger has a comprehensive documentation material on the pioneer missionary H. P. S. Schreuder, - literature, unprinted material (ia. Two handwritten books by Schreuder), as well as pictures. In the room used for committee meetings there is a photograph of a large painting of Schreuder that used to hang in the church of the mission station Entumeni, but is now found in the main office of the church synod in the town of Umpumulo.
In the town of Eshowe there is a museum containing a number of Schreuder rooms. There we find a book collection, and various objects such as a grindstone and a pair of binoculars.

Schreuder worked much with the Zulu language. This facsimile shows the cover of the Church of Norway's prayer book in Zulu.

The connection between Schreuder and the Norwegian Missionary Society was severed in 1872. Aftre this break Schreuder carried on his work through a new organization called The Church of Norway Mission established by Schreuder (aka the Schreuder mission). The organization published a missionary periodical called 'Zuluvennen' (Friend of the Zulu).
resources:
Zuluvennen. Oslo 1916.
Norsk Biografisk Leksikon. Bd 12. Oslo 1954.
Opplysningar frå:
Nils Kristian Høimyr, Misjonshøyskolen i Stavanger.