Ytre Moa – Life in and among the houses

A rich selection of objects has been found at Ytre Moa, both meant for ornaments and ordinary use. The objects tell us something about the life and work at the farm, how the soil was cultivated, what kind of domestic animals they kept, as well as how they were dressed. Some of the objects indicate that the farming activities at Ytre Moa have given a certain surplus, at least enough to buy or barter beautiful jewellery and glass. Some of the objects are also important indicators in a dating context. This is particularly the case with some of the pieces of jewellery. They show that the farm was settled in the period between 700 and 900 AD. Few finds have been registered that can be dated to after the 10th century, and this most likely means that the farm has not been in use after that time. 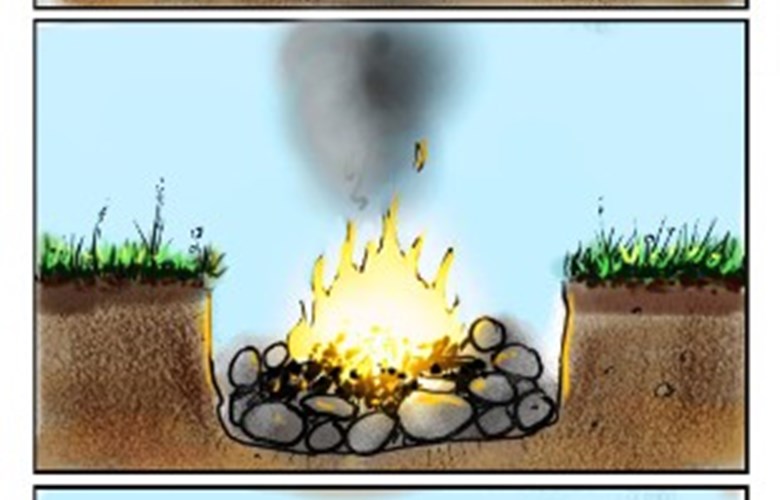 This drawing illustrates how food was made in a cooking pit. First a hole was dug in the ground, and then a layer of stones was placed in the bottom and heated. The meat was laid on top of the heated stones, whereupon the pit was filled with another layer of heated stones and earth. After a few hours the meat was cooked and ready to be served. (Ill: Arkikon)

By our standards, the interior decoration in the three dwelling houses has been somewhat sparse. Only in house A have remnants been found of a raised floor along one of the long walls, but there have probably been similar low and wide sleeping and sitting "benches" in all the three houses.

All the three houses had had fireplaces, located in the inner part of the house. The fireplace was built up about 25 centimetres above the floor. It was made with flat stones and had measured about 1.5 meters in length and 50-60 centimetres in width. The fireplace provided both light and warmth, and was most likely used for cooking as well. There might have been a kettle or pot hanging in a long iron hook above the hearth. The iron hook – also called trammel – had smaller hooks at various heights, making it easier to adjust the heat in the cooking process. The pot was probably made of iron or soapstone. Only one fragment of soapstone vessel has been found at Ytre Moa. The fragment had a drilled hole, probably in order to fasten the handle. Besides this vessel fragment, there is also a find of a fragment of a frying pan in one of the house sites.

They also made food in cooking pits, found in two of the houses, located in front of the hearth, towards the centre of the houses. In house A fragments of a hand millstone was found, showing that they ground grain. No remnants of crockery, cups and vessels have been found, except for a small fragment of a green glass goblet. However, the fragment was too small to say for sure what type of goblet it is, nor when or where it was produced. It is likewise impossible to say something about form, size and function, and also whether it was meant for everyday use or for special occasions.

In addition to pots and kettles, chests and boxes were used to keep the belongings of the household. In one of the graves, box catches were found, whereas in one of the house sites a fragment of putty was found. The putty – possibly resin – was used to tighten wooden tiner (round or oval boxes with a lid and handle) or other boxes. In the same site a ceramic fragment was found, admittedly dated to the period between 400 and 700 AD. Maybe this can prove that there had been a settlement at the place prior to the Viking Age? Knives, whetstones, fire steel and flint have been highly important objects in people's daily life. At Ytre Moa we find many knives of various sizes, used in cooking, hide, wood and textile work and other types of work at the farm. 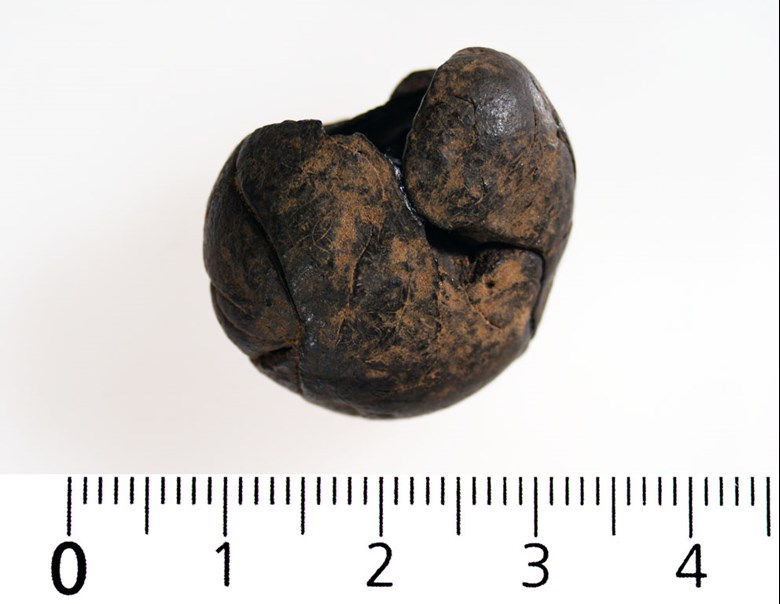 In some of the house sites and in some of the burial mounds jewellery pieces of bronze were found, for example a small fragment of a nicely decorated trefoil brooch made of bronze and a gilded pendant also in bronze with a gripping beast motif. The motif on the pendant belongs to the so-called Borre style, and can be dated to about the year 900. The trefoil brooch decorated with spiral ornamentation can be dated to the latter half of the 9th century. The finds also included a cloak pin made of bronze and a number of glass beads, in addition to two iron razor knives.

The jewellery material in itself is not particularly rich or impressive, but it shows us that the people at Ytre Moa used luxury objects traded from other places in the country or from abroad. Could it be that they made these pieces of jewellery themselves? The pendant found in site B has clear traces of filing at the back. This may indicate that they had not completely finished making the pendant before it disappeared, was lost or forgotten. In the same site where they found the pendant, some tools were found that could be linked to metal work, such as file, chisel, and perhaps a drill. This supports the theory that the pendant may have been made at Ytre Moa.

Among other objects found at Ytre Moa, there are some tools linked to the production of textiles (scissors, loom weights, whorls), metal work (smithy slag, hammer, chisel, file and drill), as well as tools used in connection with building and woodwork. All these are common tools that could be expected on a Viking farm, where subsistence farming and a wide range of activities were both common and necessary.

Putty – probably resin. This was used to tighten tiner and other wooden boxes as shown in the picture below. (Photo: The County Archives of Sogn og Fjordane)