Six men from the Holmedal parish (earlier Fjaler municipality, now Askvoll) lost their lives during the World War 1939-1945: three on Norwegian merchant ships in service abroad, one on the ironclad "Eidsvold" at Narvik, one on board the coastal steamer "Irma", and one in the extermination camp of Sachsenhausen. On 29 August 1947, a memorial stone in their honour was unveiled at the church at Holmedal. 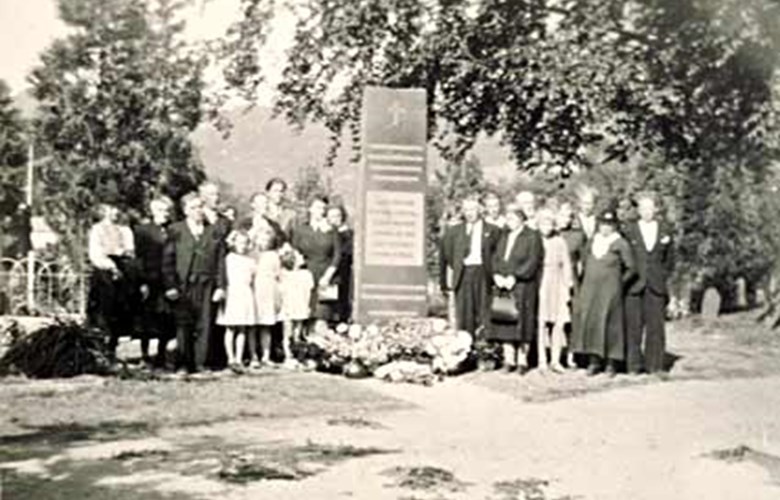 The memorial stone was erected in 1947 and unveiled on 29 August. Families of several of the fallen men have assembled at the stone.

The memorial stone is located beside the church at Holmedal. It is in dark rock with a polished front, about two metres high, and it has three inscription parts. At the top are words from the poem Offer (sacrifice) by Arne Garborg:
Offer, offer er det store (sacrifice, sacrifice is the great) * løyndomsdjupe livsens krav (hidden requirement of life). * Offer tonar frelsarordet (sacrifice it the word from the Saviour) * dåp og over grav (over christening and over grave) *
Below are the names in alphabetical order, and at the lower end of the stone is written:
Då striden rasa på land og hav (when the struggle ravaged on land and sea), * for fred og fridom de livet gav (for peace and freedom you gave your lives). * Verdskrigen (the World War) 1939-1945 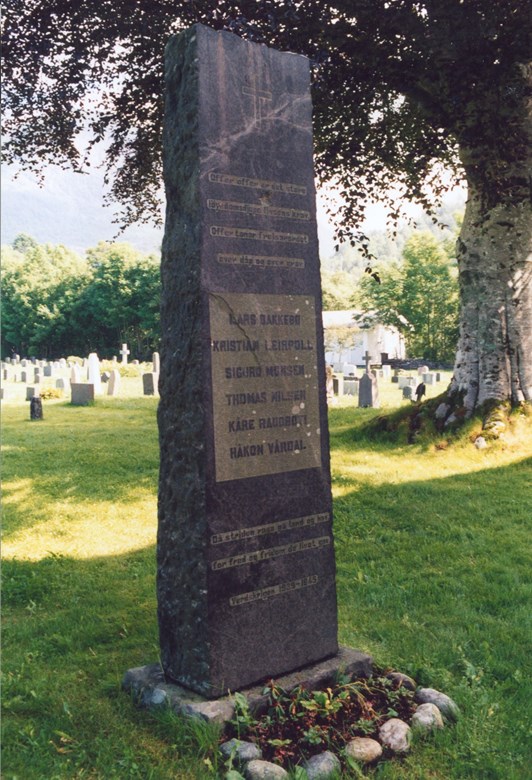 Biographies in the book "Våre falne (our fallen)"

BAKKEBØ, LARS, sailor, Fjaler. Born 15 February 1915 in Fjaler, son of Jens Larsen Bakkebø, born 1882, and Anna née Eikevik, born 1887, both in Fjaler. Went to sea at twenty years of age. On return trip, the MS Ronda ran into a minefield off Antwerp on 13 September 1939, and he went down with the ship. He is given reference in the memorial pamphlet over fallen soldiers from Fjaler.

LERPOLL, KRISTIAN OLSEN, mechanic, Fjaler. Born 12 December 1910, son of Ole Klemetsen Lerpoll, born 1883 in Fjaler, and Kamma Amalie née Howe, born in Bergen. Went to sea in the autumn of 1939 as an engine repairman on the MS Molda, and during the war he was a gunman on the MT Sandanger. The ship was torpedoed on 12 May 1943 en route from New York to Belfast, and he was lost trying to save a friend.

MONSEN, SIGURD ROLLAND, sailor, Bruvik. Born 15 February 1918 in Bergen, son of Trygve Monsen, born 1894, and Olava Iversen née Ruskedal, born 1899 in Skien. Was called up to neutrality watch as conscripted deckhand on the ironclad Eidsvold, and lost his life on 9 April 1940, when the ship was torpedoed and sunk in the Ofotfjorden.

NILSEN, THOMAS ANDREAS, shop assistant and steamship agent, Fjaler. Born 19 July 1914 in Fjaler, son of Theodor Johan Nilsen, born 1890 in Bergen, and Karoline Johanne née Thomasdatter, born 1893 at Fjelberg. Courses by correspondence. Was active in Mil.Org. (resistance organization) and took on assignments for the Stein group. Was arrested in 1941 and taken to the Bergen prison, Ulven, and in May 1942 to Germany. Came to Rendsburg in July 1943, then on to Sonnenburg in 1944. Was sentenced to four years' imprisonment, and was taken to Sachsenhausen in November 1944, where he died on 22 February 1945.

RØDBOTTEN, KÅRE, sailor, Fjaler. Born 10 March 1917 in Bergen, son of Johannes Rødbotten, born 1885 at Balestrand, and Olufine née Baug, born 1886 at Lavik. Was a sailor on the SS Irma, which sank on the Hustadvika after two explosions, en route from Bergen to Kristiansund.

VÅRDAL, HÅKON, assistant mate, Fjaler. Born 27 October 1915 in Fjaler, son of Sigurd Vårdal, born 1879, died 1946 at the same place, and Olivia née Vik, born 1881. Married in 1941 in London to Karen Lyngstad, born 1922. One child. Mate training school. Served on a Norwegian submarine, and was taken prisoner by the Germans on 9 April 1940. Escaped to Shetland on a fishing vessel and signed on to Norwegian ships. From November 1942 he was assistant mate on the SS Gudvin, which suffered 6 hours of bombing by the Germans in the Naples harbour on 15 March 1944. He had a nervous breakdown and died on 31 March of that year.

The memorial stone was erected in 1947 and unveiled on Sunday 31 August, with almost 700 people present. The chairman of the memorial stone committee, the teacher and parish clerk Ola Espedal, bid welcome and called on the dean Kordt to give the unveiling speech. His main theme was that their struggle had not been in vain.. - We have been given a free Norway, which "with the sun will flourish on their graves", he said before the cloth (the flag) fell.
The mayor R. Fagerheim spoke about the fallen men. He summed up by stressing that their efforts will always be a reminder to keep guard over a free nation.
O. K. Lerpold, who also lost a son, laid wreaths from himself and from the families of the fallen men. Mrs. Astrid Alme Helle laid a wreath from the Holmedal seamen's mission, saying: "These flowers have grown from the ground where these men grew up. The memorial stone will encourage us to carry on the liberation work for which they died." Espedal concluded the ceremony by thanking those present, and handed the stone over to the Holmedal parish council.