Rasmus Nyvoll, born 1909 at Ålfoten, fell in action in Italy in 1944. In 1951, a memorial stone dedicated to him was unveiled at Ålfoten church. It was the local youth association and the rifle association that took the initiative to erect the monument. 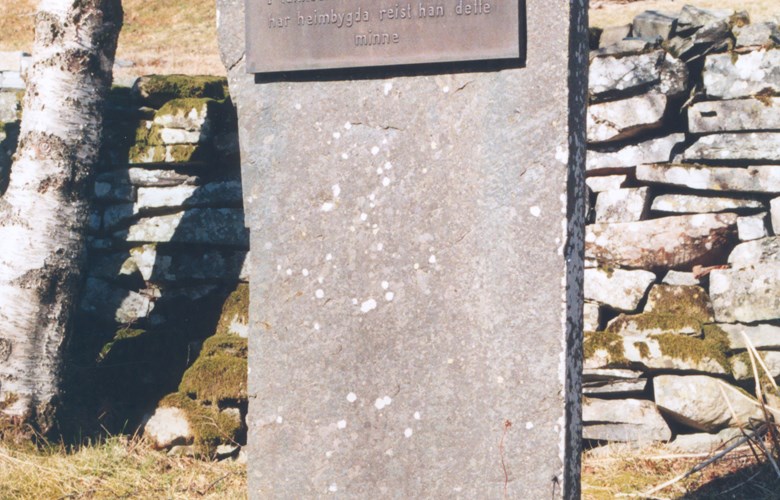 The memorial stone for Rasmus Nyvoll who fell on the battlefield in Italy, stands on the churchyard at Ålfoten church. Fresh flowers are laid on the stone every 17 May.

"NYVOLL, RASMUS Rasmussen, worker, Davik. Born 2 August 1909 at Davik, son of Rasmus Olai Rasmussen Nyvoll born 1882 at Breim, and Anna Petra née Thuesdatter, born 1882 at Bremanger. Emigrated to Canada in 1928 and reported for service when the war broke out. Died on 23 May 1944 in action in Italy."

Rasmus Nyvoll grew up on the Samsonbruket holding on the farm Myklebust at Ålfoten. He was a farmhand for a while for Mons J. Myklebust, before he and his fellow villagers Olav Vik and Ola M. Myklebust emigrated to America in 1928. He came to the state of Washington on the west coast of the USA, and had to make do with odd jobs here and there at first. Later on he moved to British Columbia in Canada where he got work as a game warden. When Norway was occupied on 9 April 1940, he volunteered for war service in Europe. After basic training in Canada and Scotland, he fought from 1943 onwards against the Axis Powers in North Africa, then took part in the liberation of Sicily in the summer of 1943, and later in the Allied campaign on the Italian mainland. In the spring of 1944, he was seriously wounded and died later in hospital on 24 May 1944, at the age of 34.

Buried at a war cemetary

Rasmus Nyvoll served in The Loyal Edmonton Regiment, Royal Canadian Infantry Corps. He was buried at Minturno War Cemetery close to the coast about 78 kilometres north of Naples. Nyvoll's grave is number 5 in row K in plot 4.

Some time after the war, the local youth association and the rifle association at Ålfoten took the initiative to erect a memorial in the village where he was born. The stone was unveiled on Sunday 19 August 1951, and the vicar Lothe gave the unveiling speech.

The memorial stone stands at the Ålfoten church, just inside the gate above the road close to the churchyard wall. A cast metal plaque is fastened to a big slab of Devonian sandstone found on the farm Sigdestad. On the plaque is written name, dates, years and the words:

"In gratitude for his sacrifice * the home village has erected this * memorial."

The war in Italy

After the Axis Powers had capitulated in North Africa in May 1943, the objective for the Allies was to get a foothold on Sicily, take the island, and then invade the Italian mainland. On 10 July, 3000 vessels landed 150 000 troops at various places on Sicily, and after 39 days, the island was under allied control. The allied offensive came as a shock to the Italian authorities. On 25 July, the Grand Fascist Council dismissed and arrested Mussolini and appointed Badoglio as a new head of government. Badoglio immediately declared that the war would continue, but later, on 3 September, agreed to an armistice.

Hitler was prepared for this development and reacted very quickly and efficiently. Massive German forces were dispatched to northern Italy, and soon the German war machine controlled more than two thirds of the Italian peninsula. A German commando detachment managed to free Mussolini who was then appointed head of a marionette government, completely in the hands of Hitler.

In the south, the Allied forces had got a foothold on the mainland in early September. Now the long march towards Rome started, a campaign that would take much longer time and cost more than they had anticipated. Only on 4 July did the Germans flee Rome, and not until the following year, in late April, did the last German forces on Italian soil surrender.

The metal plaque on the stone and the inscription: RASMUS M. R. NYVOLL * Born 2 August 1909 * fell in action for his country in * Italy 24 May 1944 * In gratitude for his sacrifice * the home village has erected this * memorial
Owner: Fylkesarkivet i Sogn og Fjordane. - Date: 2001. - Photographer: Hermund Kleppa.
Fylkesarkivet i Sogn og Fjordane.
2001.
Hermund Kleppa.

From the Minturno War Cemetery in Italy. The cemetery was taken into use in January 1944, and most of those who are buried here lost their lives in intense fighting to cross the river Garigliano in the spring of 1944. There are some 2000 graves at this cemetery.
Owner: I informasjonsbrosjyre frå Commonewealth War Graves Commission. - Date: Ca. 2000. - Photographer: Ukjend.
I informasjonsbrosjyre frå Commonewealth War Graves Commission.
Ca. 2000.
Ukjend.