The Måløy Bridge was officially opened for traffic in the summer of 1974. The bridge project was realized by means of a strong local involvement and interest. The driving forces behind the project worked enthusiastically for more than ten years to ensure the financing. The bridge project can be said to be a unique case of co-operation between local politicians and the Public Roads Administration. The bridge was one of the first toll road projects in the county. 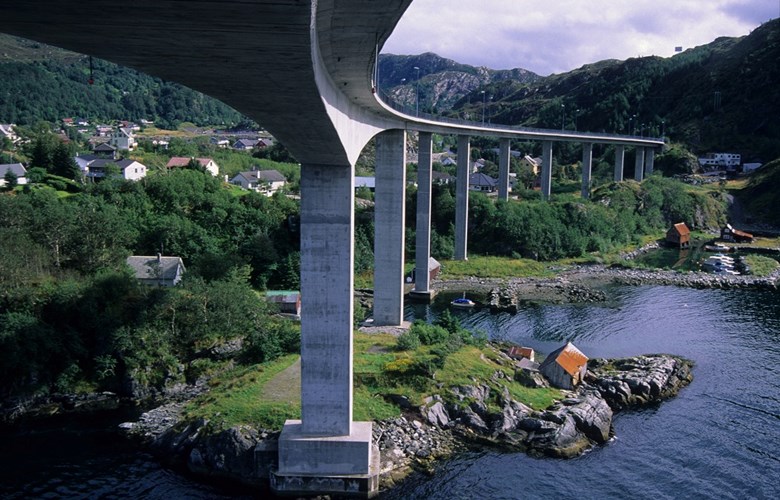 Many nice words were said about the bridge when it was opened. The mayor of Flora, Mons Monsen, thought that the Måløy Bridge was a "work of art in steel and concrete", whereas the Bremanger mayor referred to the bridge as an "elegant construction". In the opinion of the Eid mayor, the bridge was a "masterpiece that would be admired by people travelling by land or sea as long as the bridge existed". The acting county governor, Arne Ekeberg, said that the bridge was an "impressive technical wonder".

The dream of a bridge across the strait of Måløysundet

As early as in 1918, the idea of connecting Måløy to the mainland was brought up. In the master plan for Måløy, worked out by the Bergen architect Schumann Olsen, a drawing of a "Bridge connection between Kulen and Moldøen" was included. In the railway plan for the county of Sogn og Fjordane from 1920, on the other hand, a railway bridge to Måløy was not mentioned. It was intimated that a railway line would be built to Deknepollen. The depression in the 1930s with many bankruptcies in the fishing trade effectively stopped all plans of a bridge across the strait. The railway plans for Sogn og Fjordane were not realized either. Only in 1948, when a new road was built to Deknepollen, was the issue of a bridge across the strait brought up again. In 1949, the board of aldermen of the Sør-Vågsøy municipality sent a statement to the Nordfjord communication committee on the need for an "unbroken connection between the island of Vågsøya and the mainland". The car-ferry traffic was started up in 1948. 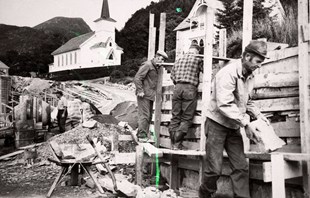 The 1950s were an economic boom period for Måløy with incredibly rich herring fisheries. These fisheries caused growth and prosperity, and people now demanded an adequate connection to the mainland. The issue of a connection to the mainland was a recurrent item on the agendas of the local council in the 1950s. The mayor in 1955, Marius Larsen, penned the basic principles for the further work with the bridge project: It would be financed by toll money, under the administration of an independent, responsible company. The construction would be financed with loans, and the municipality would guarantee for these loans. This would be a heavy economic burden for a municipality with only 3000 inhabitants. The Public Roads Administration in the county was also interested in a bridge project. Its chief administrator at that time, Egil Abrahamsen (1956-1970), became an important supporter of the bridge project.

In the 1960s, several attempts were made to dig tunnels under water, and the Public Roads Administration surveyed the terrain in the strait. The idea of a tunnel was far from unrealistic, and many people went in for this alternative. The technology was there, and through its hydroelectric development, Norway had a long experience in constructing tunnels under water. The motorboat pilot Karl Lofnes, on the other hand, was a keen advocate for the bridge alternative. He started a private bridge company, and he also took the initiative to establish a non-political party "Vågsøy upolitiske samlingsliste" (the bridge list) which in 1963 took part in the local elections. They got three representatives into the municipal council, and held a high political profile with letters to the newspapers and even had its own bridge planner. The Public Roads Administration eventually went in for the bridge alternative, when they found out that the expenses for building a bridge or tunnel would be just about the same.

Great willingness to finance the bridge

The Public Roads Administration calculated the economic aspect of the project to 17 million kroner in 1971. The bridge would have to be partially financed by toll money. The reason was that before the road project Eide-Barmsund-Almenning was completed, it was hard to get any allocations for the project. Normally, bridge companies would have to cover 2/3 of the expenses, whereas 1/3 would be covered by the state. In the case of the Måløy, it was the other way around.

In 1966, the municipal authorities sent out an invitation for subscription of shares in the bridge company "Måløybrua A/S" (Ltd.). The share capital was 600 000 kroner, and each share cost 100 kroner. Leif Iversen was chosen to be the manager of the toll company. He was a former mayor of Sør-Vågsøy.

Before the municipalities were united in 1964, Nord-Vågsøy had allocated half a million kroner to the bridge project. Vågsøy allocated about one million kroner, and, in addition, the Vågsøy municipality bought 342 shares and guaranteed for loans that the "Måløybrua A/S"had taken up. 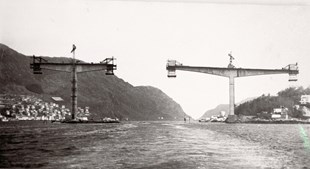 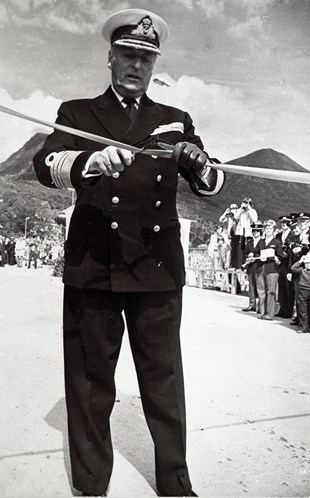 On 15 November 1967, the county council decided unanimously that the plans for the Måløy Bridge and a new year-round road across the mountain pass of Strynefjellet had to be connected. The road projects had to be given top priority in terms of major road construction projects in the county in the coming 15 years. On 10 December 1968, the Storting decided that the bridge project was to be a part of the construction of highway 15 from Otta to Måløy.

However, it turned out that the cost estimate had probably been set too low. Two similar bridge projects in northern Norway had become twice as expensive after the invitation to tenders. Consequently, a new cost estimate for the Måløy Bridge was set to 34 million kroner, instead of 17 million. The submitted tender was 34 million kroner. The Public Roads Administration demanded that the toll company would have to raise half this sum. This led to many sleepless nights for Leif Iversen in the toll company, but they managed to get new loans through hard work. The project was after all considered to be solid and future-oriented. The final expenses for the bridge actually amounted to 32 million kroner.

The car frequency surpassed the prognoses

The bridge opened for traffic in December 1973. In relation to the population and the traffic prognoses, this was in fact a daring project, but it soon turned out that the traffic shattered all prognoses. 188 000 cars were registered the first year, 78 000 more than projected. Eight years later, the private car traffic had been projected to 180 000 cars, whereas it actually surpassed 390 000 cars. The toll rate for a private car was 12 kroner, and for a semi-trailer it was 48 kroner. For a child it cost one krone to cross the bridge and two for an adult person. The collection of toll money was terminated on 1 August 1984, and the bridge company was dissolved in April 1986.

There was much festivity at Måløy when the Måløy Bridge was officially opened by His Majesty, King Olav on 11 July 1974. The opening ceremony took place at the "Spiral" at the Måløy end. King Olav came to Måløy on the royal yacht Norge directly from a visit to Iceland. The opening ceremony had to be postponed for a day as the royal yacht was delayed by extremely bad weather. 5000 people turned up when the king opened the bridge.
Owner: Fylkesarkivet SFFf-1996136.0008 - Date: 1974 - Photographer: Berit Visnes
Fylkesarkivet SFFf-1996136.0008
1974
Berit Visnes

The master plan for Måløy did not include any plans for a bridge. The problem was that where it would be natural to build a bridge from the Måløy side, there was a church and a graveyard stretching from the shoreline and upwards along the hillside. The problem was solved by building the bridge above a small corner of the graveyard. Nobody has ever criticized this decision. A comprehensive change in the master plan had to be implemented, and ten houses on the mainland and at Måløy had to be torn down. In this way, the Måløy Bridge came to change the old Måløy.
Owner: Statens vegvesen Region Vest, SFFf-100057.111995 - Date: 1996 - Photographer: Per Birger Lomheim
Statens vegvesen Region Vest, SFFf-100057.111995
1996
Per Birger Lomheim

The bridge is a stressed concrete construction with two main spans, each measuring 125 metres (410 feet), in addition to two 65-metre-long side spans, using the cantilever construction method. Most of the 30 other spans have a spread of 30 metres. The total length of the bridge is 1274 metres (close to 4200 feet). The sailing height in the shipping lane is 42 metres. 1500 tonnes of reinforcement steel were used, 14 300 cubic metres of concrete and 175 000 metres of bracing cables. The bridge has curves both in the vertical and the horizontal planes, which made the construction more complicated.
Owner: Fylkesarkivet SFFf-1994203.0007 - Date: 1973 - Photographer: Ukjend
Fylkesarkivet SFFf-1994203.0007
1973
Ukjend

Westerly winds may sweep violently north in the strait of Ulvesundet. On many occasions hurricanes have destroyed the wind gauge on the bridge. The bridge has often been closed for traffic, even if it is constructed in such a way as to withstand extra strong wind from the southwest. The picture shows the warning system so drivers themselves can assess the danger implied in crossing.
Owner: Statens vegvesen Region Vest - Date: 1990 - Photographer: Olav Handeland
Statens vegvesen Region Vest
1990
Olav Handeland

The Måløy Bridge may never have been realized without the interest and great effort by Leif Iversen. He made many trips to the offices of the Public Roads Administration both at Hermansverk and in Oslo. Iversen's white Volvo Amazon was frequently seen on the roads in Nordfjord. Iversen was the youngest mayor in the country in 1937 when he took over from his father, Karl Iversen. He held office as mayor until 1964, and was also a member of the county council for 35 years. In 1974, Leif Iversen was appointed knight of the 1. class of the Order of St. Olav for his long and comprehensive services in politics and public life.
Owner: Fylkesarkivet, SFFf-1997133.0034 - Date: 1963 - Photographer: Ukjend
Fylkesarkivet, SFFf-1997133.0034
1963
Ukjend

The bridge was referred to as the country's safest bridge. What they did not know then was that salt erosion became a major problem for many of the bridges built in the 1960s and 1970s because of bad concrete standard. In the early 1990s, the bridge had to be totally renovated, as was the case with so many other bridges along the entire coast. The renovation was successful and the Måløy Bridge still stands. The picture shows workers during the renovation project.
Owner: Statens vegvesen Region Vest, SFFf-100057.111994 - Date: 1996 - Photographer: Per Birger Lomheim
Statens vegvesen Region Vest, SFFf-100057.111994
1996
Per Birger Lomheim
resources:
Statens Vegvesen Sogn og Fjordane: Leif Iversen og Måløybrua . 1995.
Starheim, Ottar og Sølvberg, Terje: Måløy. Brua og byen. Måløybrua AS under avvikling. 2003.