The Loftesnes bridge in Sogndal

The Loftesnes bridge was the first bridge and road project in the county to be financed by toll money. The bridge was completed in 1958. In a 20-year period before 1958, a small shuttle ferry had crossed the narrow strait of Loftesnessundet, and further back in time, a ferryman had rowed people and cattle across. The bridge was an important step forward in the land-based communication in the central and inner parts of Sogn, at the same time as it made the connection to eastern Norway much easier. 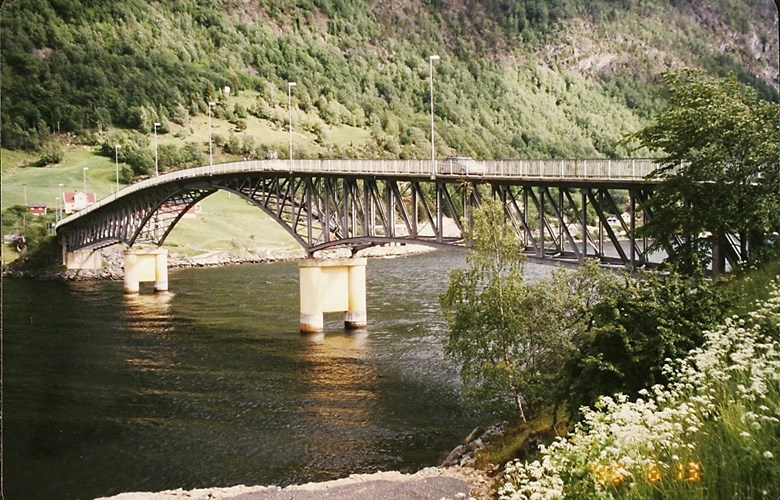 The bridge, opened for traffic in 1958, was designed by the bridge section of the Norwegian Directorate of Public Roads. The bridge is a frame-work steel bridge with an overlying bridge roadway in reinforced concrete. The bridge itself has two side spans with a length of 52 metres, and a main arch span measuring 72 metres in length. In addition there are three minor side spans, one on the Sogndal side and two on the Loftesnes side. The whole bridge is 210.5 metres long. The maximum sailing clearance is 15 metres. The total cost of the project amounted to 2.15 million kroner. The sisters Josefine and Sofie Loftesnes helped raise 30,000 kroner to pay for lighting on the bridge.

The ferryman across the strait

When you drive down to Loftesnes on the eastern side of the Barsnesfjord, you can see an old, weatherbeaten shed at the Loftesnes sawmill. This was the machine house for the cable ferry across the strait before the bridge was built. The short sea crossing between Nes and Loftesnes has been much used throughout the years. It linked the inner Sogn villages on the north side of the fjord to Kaupanger and Lærdal. What year the ferryman was permanently employed remains uncertain, but from the 1880s the job was carried out by Jon Loftesnes. Over a period of fifty to sixty years, he rowed back and forth across the strait. He was accompanied by his daughters Josefine and Sofie when they were old enough to be of any help. Jon frequently used the "big boat" when cattle were transported across, whereas the daughters used the rowboat to take people across. In 1938, a new and improved road was finished between Loftesnes and Loftesnes and Kaupanger, and it then became necessary to get a car ferry. The Public Roads Administration now took over the ferrying business, with Josefine and Sofie in charge of selling tickets onboard.

When the ferry sank

In 1938, the highway authorities used a small shuttle ferry. The ferry was ordered by the chief county road administrator Alf Torp, and it was delivered by "Løland Motorverkstad" at Leirvik. The ferry is said to have been one of the first weldless steel ferries in the country. The ferry was 15 metres (about 50 feet) long with deck space for four private cars. On 9 November, 1941, the ferry sank while being towed back to the shipyard for maintenance and repair. Josefine and Sofie were ready once again to transport people across in a rowboat. Jon was now too old. He had sold the "big boat" to the highway authorities for 300 kroner. Some time later a temporarysolution was found by using a ferry connected to steel wires, operated by a crank mechanism. This operation was far from simple and in wintertime it could even be dangerous when the wire rested on the ice.

A new cable ferry was delivered in 1944. The ferry did not only transport people but also sheep, cows and horses. It happened that the animals were frightened and jumped overboard while crossing the fjord, but major accidents were rare. The ferry crossing was not always a pleasant experience in rain and snow as the deck was not covered. The ferry did not run at regular hours either. School children from Barsnes and Loftesnes on their way to school at Trudvang had to get up early in the morning in the hope that cars were about to be transported across. Only towards the end of 1946 were regular departure hours introduced. The fare for one person was the same as for one animal. The ferry service operated until November, 1958. This last year the ferry transported 32 000 cars and 126 000 passengers.

Plans for a bridge across the strait

As early as 1877, plans were made to build a wooden bridge across the strait between Nes and Loftesnes. Only when the Storting (Parliament) allocated money from the so-called compensation budget in 1938, the bridge plans were taken up for reconsideration. A new blueprint was made, but The Second World War put a stop to these plans. The plan to build a new bridge across the strait was resumed only in 1954. On 25 November, 1938, the Loftesnes bridge on national highway no. 565 officially opened for traffic. A crowd of about 1000 persons attended the ceremony. The county governor Nicolai Schei carried out the official opening ceremony by cutting the ribbon strung across the middle of the bridge. The local brass band was the first to cross the bridge on foot, followed by the rest of the crowd. The band returned across the strait to Nestangen on the ferry, and this was the last shuttle the Loftesnes ferry made.

The financing of the bridge was meant to come through the state budget, but was in the first instance advanced by means of loan. In order to cover the interest of the loan capital, toll money was introduced. This was the first toll-financed bridge and road project in the county. The municipality of Sogndal was in charge of the construction, and the bridge loan was paid off in the course of six years. In the first year a bus or lorry was charged three kroner, a private car or tractor two kroner, and one kroner for a motor cycle. Bikers and pedestrians did not have to pay anything. Once again it was Josefine and Sofie who took the job to sell tickets. They shared the job between them until the toll-financing came to an end in 1965.

This is the first Loftesnes ferry, photographed after the launching in the summer of 1938. On deck we see some of the workers of 'Løland Motorverkstad' and some others. The chief county road administrator thought it important that as much as possible of the equipment the Public Roads Administration needed was produced in the county. The ferry was built on commission from Torp. The ferry measured 15 metres and with a deck space for four private cars. It was pulled across the strait by a steel wire. The wire was pulled by a crank, driven by a 7.6 hp Sleipner diesel engine.
Owner: Fylkesarkivet i Sogn og Fjordane SFFf- 88192-007 - Date: 1938 - Photographer: Bjarne Råsberg.
Fylkesarkivet i Sogn og Fjordane SFFf- 88192-007
1938
Bjarne Råsberg.

From left to right: Sofie, Gudrun, Anna and Josefine Loftesnes with Lars Hofslund standing behind them. Gudrun was a teacher at Granvin all her grown-up life. The other sisters took turns to shuttle people and cattle across the strait of Loftesnessundet. This was before the ferry and the bridge came. Later on they sold tickets onboard the ferry, and finally they were in charge of taking toll money on the bridge.
Owner: Fylkesarkivet, SFFf-1997028.0009 - Date: 1965 - Photographer: Ukjend
Fylkesarkivet, SFFf-1997028.0009
1965
Ukjend

This picture shows a meeting of old and new transport generation in Sogndal. In the background the Loftesnes bridge is under construction to be opened in 1958. In the foreground we see the ferry used for transporting cars across the strait. The ferry pilot was Bernt Pedersen.
Owner: Fylkesarkivet, SFFf-1994284.0003 - Date: 1955-1958 - Photographer: Ukjend
Fylkesarkivet, SFFf-1994284.0003
1955-1958
Ukjend
resources:
Førsund, Finn: Ei industriverksemd i ytre Sogn. I Årbok for Sogn. 2004.
Engesæter, Aage og Thue, Johs. B: Sogn og Fjordane fylkeskommune gjennom 150 år. Det Norske Samlaget 1998.
Nederlo, Liv Kvåle: Loftesnessundet.