The writer Sigurd Kvåle (1902-1962), born in Sogndal, was in the inter-war years one of the most talented of the short-story writers who wrote in "nynorsk" in this country. He also wrote novels, stories for children, and poetry. The library in Sogndal (Sogndal Bibliotek) has many of his books and a collection of book reviews, and other material.

Sigurd Kvåle was born at Kvåle in Sogndal in 1902. His father was shoemaker Lars Jensen and his mother¿s name was Bertine Kvåle. The family had a farm and an orchard. Sigurd was the elder son.

For two years Sigurd was a student at "Sogndal Folkehøgskule", later on he started at the Teacher Training College at Stord where he graduated in 1924. Sigurd Kvåle lived at several places in eastern and western Norway: Vigrestad, Aurskog, Torsnes, and Tysvær. In 1945, he moved to Rælingen where he settled down for the rest of his life. In the summer holidays he frequently returned to Sogndal. He was married to Astrid, née Sandsmark, and they had a son, Per Lage Kvåle. Sigurd Kvåle died in 1962.

On his literary production

The reviewers agree that the writer mastered short-stories best, but he also published stories for children and novels. Poems and short-stories were printed in various newspapers and periodicals, such as "Nynorsk vekeblad", "Jol i Sogn" and "Arbeidermagasinet". Many people have expressed their regrets that his poetry has never been published in a book.
Key themes in Sigurd Kvåle¿s literary production: a) children, young people and old people, b) the rural community - social and economic conditions, particularly in the 1920s and 1930s, c) the human mind, and d) persons who are outsiders in the social community.

Edvard Beyer, professor of Nordic literature, writes in the short-story anthology "Perler i prosa" the following about Sigurd Kvåle:
"He is one of the few "nynorsk" writers who have concentrated on writing short- stories. This is also the genre he is most talented in. He has the ability to concentrate everything in a situation. He tells a story quickly and excitingly. With few, simple words much can be implied. He has a good sense of symbolism - not of the cunning kind - but which is part of the subject matter itself.
All these qualities we encounter in the story "Krefter". It was written during World War II. In a strong and moving way the story deals with a dramatic episode in the timber forest. However, at the same time it also deals with - in a non-artificial way - something else and more."

In 1967, an anthology of his short-stories was published by Samlaget. Halldis Moren Vesaas selected the stories and in the preface she writes:
"--- happy to see that such fine things Sigurd Kvåle could create now will get a chance to reach a wider readership, and equally happy that it is precisely him that gets this chance.
The second book published by Kvåle,"Tider og år", includes a short-story that caused a lot of attention, the intense, moving, and the psychologically perceptive and merciless "Du er bror min, Ivar". This short-story ranks among his best. The socially disadvantaged people, like Ivar in this story, are obviously very close to Kvåle¿s heart. Kvåle can be described as a socialist. In many of the things he has written, there is a strong indignation of the injustice people can do to each other, but people can also - and as time goes by - will make up for this injustice.
But what about the injustice that no kind of progress can eradicate comletely? Above all, this is the injustice that is on Kvåle¿s mind, filling him with painful compassion. Why does life play so blindly with human destinies? When this writer was so concerned with the ¿Ivars" in this society and other people who could do so little to protect themselves against an unpredictable destiny, it might have something to do with his fundamental attitude to life: his sensitive wonderment of life, his profound respect for people. This pervades everything he has written, no matter what theme he raises."

Sigurd Kvåle also published the novel "Siglaren", a contemporary novel about the rural community. This book clearly shows Kvåle¿s social commitment. He describes the economic and social conditions - and in particular the dark aspects - in a village in the 1930s. An important element in the book is also the development of the young character Jostein Hamar - from personal crisis to active work for a better society. He gives us a clear picture of the differences between those who did not own any land or were unemployed on the one hand, and the big farmers and the middle and upper classes on the other.

"Håvard på Eggvin" (1943) and "Sterkesmeden" (1948) are two easily read novels or stories of everyday life. In these two books we can find both romance and drama in the rural community. The writer¿s roots are evident both in the language and his descriptions of the countryside and the communities.

Sogndal bibliotek has made a list of Kvåle¿s literary production, and in its local department there are a number of newspaper articles, book reviews, and other material. In ¿Fjognedokbasen", the article base in the County Archives of Sogn og Fjordane, we can find some short-stories and poems, not published in books. 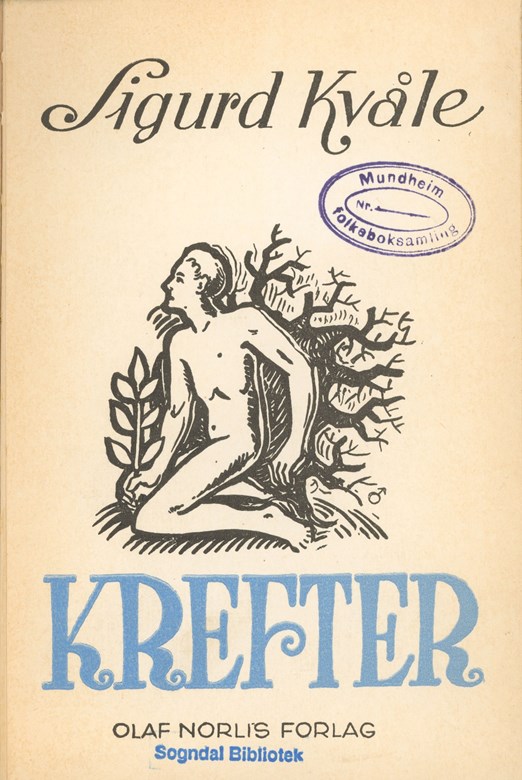 Sigurd Kvåle. In 1987, The cultural committee in Sogndal organized a Sigurd Kvåle evening at 'Sogndal folkehøgskule'. The programme included recitations of poems and prose, as well as an interview with his friend from youth, O. J. Skjeldestad. One of the highlights was the poem Fjedli mine, with a melody composed by Sverre Volle and performed by the choir 'Sogndal Songlag'. Jarle Bondevik from the University of Bergen gave an introduction to Kvåle's literary production.
Owner: I Norsk Allkunnebok. - Date: Ukjend. - Photographer: Ukjend.
I Norsk Allkunnebok.
Ukjend.
Ukjend.

Sigurd Kvåle was best known as a short-story writer. The short-story anthology Krefter was published by 'Olaf Norlis forlag' in 1946.

Kvåle wrote stories and novels for children. Many of his stories are included in primary school readers. Over fårlege fjell, an anthology of stories for children was published in 1936.
resources:
Norges litteraturhistorie. Bind 5. 2. opplag. Oslo 1991.
Avisa Sogn og Fjordane. 14.10.1987. Leikanger.