Undredal goats grazing along the fjord in spring

The goats of Undredal are lucky animals. They do not have to stay indoors for more than five-six months a year. As early as in April/May the first ones are released to their spring pastures of fresh grass. At first they graze along the fjord where the grass comes early, and later on they move up to the mountain farms. 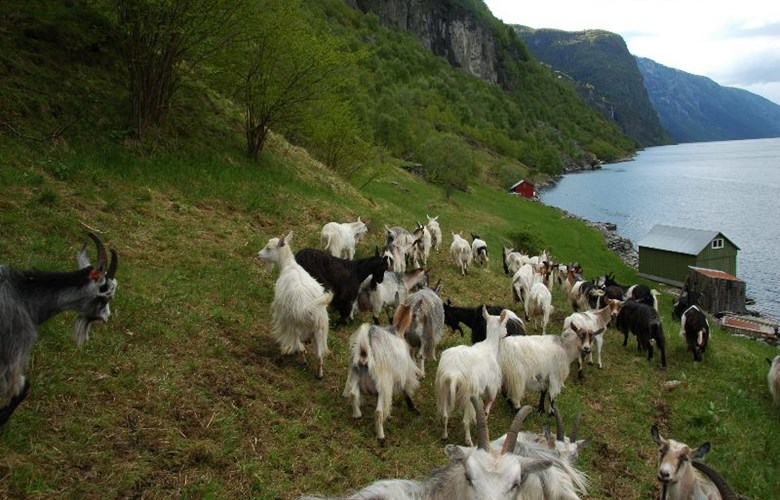 Bouncing along the fjord.

Changeover
It is vital for the quality of the milk and the cheese that changes in the forage are carried out in a gentle and careful way. Sudden fodder changes lead to milk that is highly unsuitable for making cheese because of an imbalance in the protein composition. Spring grazing on fresh grass is a drastic forage change. In order to ensure a careful transition of fodder, the goats should not be allowed to graze more than a few hours a day for the first few days. In addition, they should be given almost their normal winter fodder inside the sheds. However, the spring-fresh grass is so tasty that they soon reject the winter hay and prefer to wait until they get out.
After almost a week we let the goats stay out all night long. On the other hand, they have to stay indoors for half a day to eat some hay. Besides, we cannot look after them on a 24-hour basis, and the goats tend to get into people's gardens during their spring grazing.

"Bortom" (On the other side)
Formerly all the goat farms at Undredal used to release their goats on the pastures on the other side of the fjord early in the season. These pastures face the south and the grass comes very early. Then we had to cross the fjord by boat twice a day to milk the goats. We were the last to uphold this tradition, but we had to stop this practice some years ago due to extra work on the home front when we had babies. Another reason for stopping was that the quality of the goat milk was not always good.

Grazing by day or night
The first few years we had the goats grazing along the fjord instead of "Bortom", and we let them loose in the daytime. In order to make them used to new grazing habits, I walked with them in the pastures all day long. Little by little I let them move further away from me so they could graze on their own. However, this meant much work looking after them when they returned as they were prone to getting into people's gardens.
Norwegian goats are fairly similar to wild animals which like to graze either at dusk or dawn. For this reason, after a few years I let them stay out all night and this proved to be a much better arrangement. They moved further away to graze and they did not return until the wee hours of the morning to be milked. In addition, their udders did not get sunburned.


Tough time for the udder
Springtime is a tough time for the udder. The udder skin is very delicate after spending the winter indoors. Outdoors it is easily scratched, especially in the front part by raspberry bushes, dog-rose and rocks. The worst time is after four-six days and then the problems disappear after about ten days. During this period it is important to apply good udder liniment, preferably containing a sunscreen if they graze during the day. When the goats are milked in this period, there tends to be some kicking. Afterwards the udder skin is hardened and turns darker, and for the rest of the summer the udders are no longer sore. For this reason it is somewhat harder work to milk the goats. Occasionally the milk contains shreds (white lumps), which shows that this period is a strain on the health of the udder.

The fodder
Grazing goats are on the move all the time. They nibble a little here and there before moving on to the next treat. If they come across a lush pasture, they may take a bite or two and then hurry on. Goats are natural browsers, that is, they love eating twigs and leaves. They can stand on their hind legs to reach further up. Fern curling up in spring is nibbled down to the root. Raspberry, sallow, birch and mountain ash are delicacies. They like less hazel and alder, and this is the reason why we find many of these trees in the pasture areas. Dog-rose is also a favourite and the goats eat even the bark including the prickles.

Grazing technique
The lower jaw of goats only has front teeth. Instead of upper front teeth they have a tough dental pad. The goats use their lower front teeth like a plane to strip off the bark from trees or bushes. Then they pinch the bark between their lower front teeth and the upper dental pad to tear loose a strip of bark. Afterwards they can munch the delicacy with their strong molars. If the twigs are thin, they chew them off in the corners of their mouths where the molars are. These are twigs with a diameter of up to one centimetre. Goats have picked up many tricks to get hold of twigs and foliage. For example, they can pull down a twig or branch with their mouths and then place a fore leg to keep the branch down until it is stripped of leaves. They also use their necks to keep the branch down. If one goat has been able to get hold of a fine branch, the others may run up to snatch a bite or two. Some goats even climb on top of others with their fore legs to reach further up.

Landscape management
Where goats graze, the fields do not become like a lawn afterwards as with sheep or horses. The forest is kept open and accessible and the fields do not become overgrown so quickly because goats eat new tree shoots. However, grazing has to be intensive to prevent areas from becoming completely overgrown. The hillsides along the fjord are grazed for a few weeks in spring and perhaps in autumn, and in these areas hazel has grown much in the past 25 years. Green and steep pastures are now completely overgrown with hazel. On the other hand, the situation would have been much worse without the goats grazing in these areas.