The memorial at Ospa - the MTB 345 tragedy

On Monday 28 July, 2003 a memorial of a wartime occurrence was unveiled in Solund. It was sixty years to a day after the seizure of the Norwegian motor torpedo boat MTB 345 and the execution of the crew in Bergen a short time later. Member of the Storting (Parliament) and leader of the defence committee, Marit Nybakk, gave the unveiling speech. 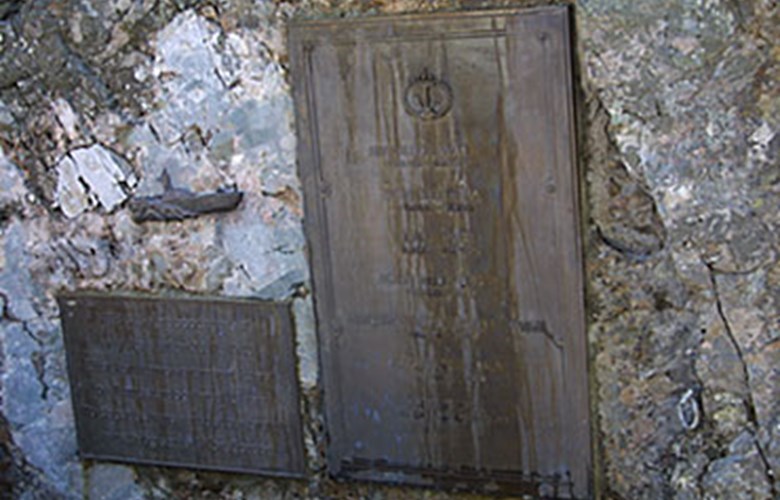 The memorial at Ospa is in three parts and fastened to the wall of the cliff.

In July, 1943, the Norwegian motor torpedo boat MTB 345 was on a mission in Norwegian waters between Florø and Bergen. The vessel was detected by the Germans and seized on 28 July while hiding close to a cliff in a bay on the island of Ospa in Solund. The crew of seven, six Norwegians and one British, were taken to Bergen. There they were first interrogated by people from the German Kriegsmarine (navy), but soon after handed over to the SiPo (the German security police), who tortured and executed them all, hands tied behind their backs, in a grove at Ulven at 05.30 in the morning of 30 July.

The execution was in accordance with Hitler's illegal Kommando-Befehl of 18 October, 1942, which was contrary to international law, and despite the fact that the crew were prisoners of war in uniform. The atrocity was to be kept secret. The Germans put the victims in caskets with explosives, took the caskets out on to the Korsfjorden, submerged them into deep water, and let the explosives go off.

More than an isolated war occurrence

The MTB 345 tragedy was far more than an isolated incident of war associated with Solund. The incident is a part of the North Sea traffic during the war years, the resistance movement, and the link between occupied Norway and the free Norway in Great Britain. It is also an incident in which international law was grossly violated. This execution was one of the prosecution's counts in the indictment against General Nikolaus von Falkenhorst, the supreme military leader of the German occupation power in Norway. The MTB 345 case can be found in many places in the war literature.

In 1965, a memorial stone commemorating the MTB 345 crew was erected at the navy base of Ulven in Bergen. On the stone is fastened a moulded bronze plaque with a relief of the boat, an information text, and the names of the crew members.

Trygve Heggheim, Leikanger, together with politicians and persons interested in war history in Solund, took the initiative to have a memorial erected at Ospa, in the place where the boat was seized and the crew taken prisoner. The Solund municipal council discussed the project in session on 4 March, 2003. The council decided to be supportive and voted a contribution of NOK 15,000 for the purpose.
The MTB memorial in Solund was made with the memorial at Ulven as a model. It is in three parts - a silhouette of the boat, the names of the crew members, and an information text. The parts are installed beside each other in the wall of the rock so as to build a whole. A distinctive feature in the MTB 345 memorial in Solund is that it can be approached only by boat. 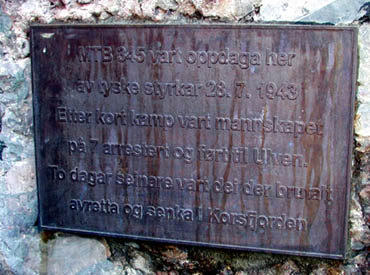 On the day of the unveiling ceremony there was a fleet of boats bound for the site at Ospa. The memorial was unveiled from the sea, and Marit Nybakk, leader of the defence committee of the Storting, had been given the honourable task to perform the unveiling. She gave a poignant speech, in which she stressed what the war was about - by drawing the lines up to our time, and what gratitude we should feel to the MTB crew, and to all the others who took part in the mortal struggle. Marit Nybakk said:

"Our gratitude to those who sacrificed their lives for our liberty and the liberty of Europe ought to be boundless. We owe them everything.

When we again hear the sound of the boots of young fanatics in European cities, when thousands of innocent people were massacred in the 1990's in our own part of the world, when brain-washed terrorists use packed passenger planes as living bombs - then we shall remember the price they paid, those we now honour, so that we can still be free and live in a society based on democratic and human values.

Not least it is important that the young people are given sufficient knowledge about this chapter of our history. That they are reminded that human rights, freedom from fear, and the freedom of expression, cannot be taken for granted. And that in many places in the world oppression and violence are everyday occurrences."

- Or gratitude to those who sacrificed their lives for our freedom and the freedom of Europe ought to be boundless. We owe them everything, said the leader of the defence committee of the Storting, Marit Nybakk, in her unveiling speech. Hans H. Steinsund told the story of the MTB 345 tragedy.
Owner: Sjøforsvaret. - Date: 2003. - Photographer: Ukjend.
Sjøforsvaret.
2003.
Ukjend.