The struggle for bridge across the Dalsfjord

The Dalsfjord bridge has been the most hotly debated communications project in the county and has led to bitter political controversy. The start was the wish for a road on the north side of the Dalsfjord, in order to establish a connection between Askvoll, Førde, and Dale by way of Bygstad. But in 1974, the Storting (national parliament) favoured a bridge across the Dalsfjord instead of a road. Accordingly, the work on the road up to the planned bridge was started from Eikenes on the north side of the Dalsfjord, however, the bridge never materialized. 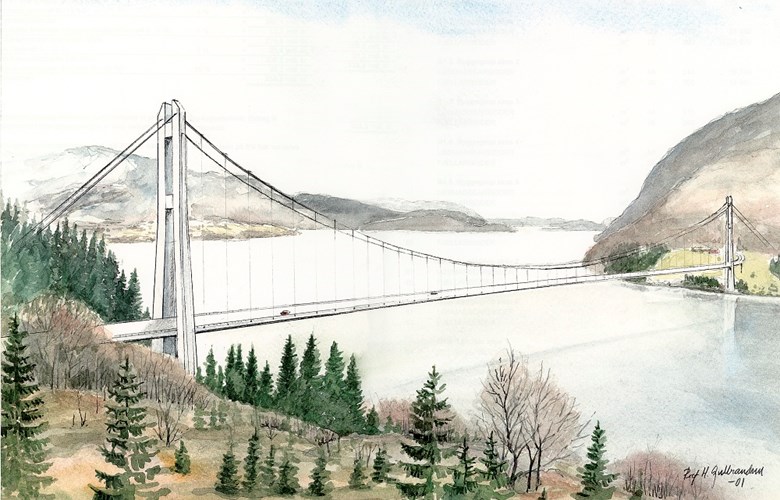 A drawing of the Dalsfjord bridge and its position in the landscape. The idea is a suspension bridge with a central span of 490 metres and a sailing height of 42 metres. If the viaducts are included, the bridge will be 680 metres long. There is a lane for pedestrians and bicycles. The cost was in 2001 calculated at NOK 350 million. The preliminary project was made by the Directorate General of public roads.

Demand for a road around the Dalsfjord

The demand for a continuous road on the north side of the Dalsfjord was forwarded by the communications board and the municipal council of Askvoll in 1932, and in 1933 Gaular municipality joined in. Fjaler municipality, on the other hand, wanted a ferry service from Eikenes to Dale and a road eastwards on the south side to Osen (Bygstad). The issue was postponed for further study and pending the compensation plan (financial compensation for lack of railway in the county of Sogn og Fjordane). In the final proposal, none of the roads were included, but Dale-Osen was given an allocation in the ordinary county budget in 1938-39.

Plan for a road on the north side was not shelved

In 1939, a rural road was built from Sunde to Laukeland along the north side of the Dalsfjord. When the road Dale-Osen was finished in the 1950s, the wish emerged for a road from Laukeland on to Eikenes, to connect the communities on the north side and the south side of the Dalsfjord. In 1962, 1200 signatures were collected in support of this. In 1967, the county council gave the road Laukeland-Eikenes top place on the priority list of state road projects for the period 1970-79. 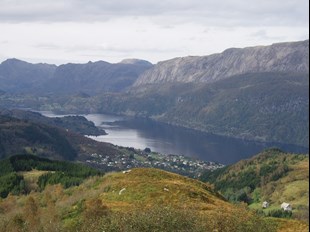 Controversy over priorities in the municipal council

From "north side road" to bridge project

In 1970, the Storting (national parliament) in connection with document no. 14 (Norwegian roads plan), decided that a bridge should be built across the Dalsfjord in the 1980s. When the roads plan came up for revision in 1973, the Dalsfjord question was raised again. The state now wanted to have a road built from the ferry quay at Eikenes and eastwards to Otterstein with a temporary ferry service between Otterstein and Dale, until a bridge could be built across the fjord from Otterstein to Nishammar. The plan now envisaged a finished bridge around 1981.

The road was regarded as an important part of the road system for the Askvoll peninsula, with a population of around 4600, and a sizeable industry. The bridge would make redundant the ferry service Dale-Eikenes, a crossing taking 25 minutes. In 1974, the work on the road from Eikenes toward Nishammar was started. Some of the money was from extraordinary jobs creation funds. The road Eikenes-Nishammar was in 1973 estimated at NOK 21 million.

The grants were stopped

"The scandal road" a political problem

In the Norwegian roads plan for the period 1982-85, NOK 50 million originally meant for the project, was transferred to other projects such as bridge across the Norddalsfjord, road along the Hyefjord , and road improvements in Hyllestad. But the unfinished road became a political problem. The Dalsfjord project was postponed indefinitely and would be considered in later revisions of the Norwegian roads plan. Very little happened, however. "The scandal road", which had cost NOK 13 million, has since 1981 been unused and stops at a mountain wall. Activist groups have ever since worked hard to get the Dalsfjord bridge on the agenda for state appropriations.

One of the arguments used against a bridge has been that the traffic is too light, if the ferry traffic is the basis. Around 1995, the Public Roads Administration made a project report based on traffic prognoses from the SINTEF. The predictions were based on the number of jobs on each side of the fjord, the secondary school at Dale, and the indoor sports facility. And a higher number was arrived at. In 2006, a municipal area plan is in progress, in which the bridge is a part. The Public Roads Administration has analysed three preliminary eventualities: the Dalsfjord bridge, a new and shorter ferry service, and the existing ferry service. When the planning is completed, the cost of the projects will be more exact. 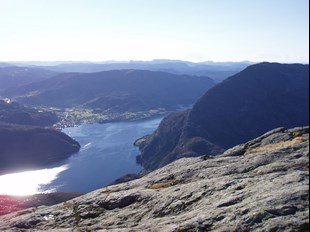 Favourable decision by the county council

When considering the action plan of the Norwegian traffic plan (NTP) for 2006-2015, the majority in the county council in 2005 wanted to give priority to the Dalsfjord bridge. The Senterpartiet, the Arbeidarpartiet (labour), and Høgre (conservatives) were able to establish a majority for the complete financing of the Dalsfjord bridge. They assumed that construction would be started in 2009. The Public Roads Administration had suggested state road 60 Olden-Innvik be given priority, since there had been a strong wish in the political parties to give priority to existing roads. State road 60 has a standard unfit for the traffic on it, in strength and road width. The danger of a collapse exists. But this time the Dalsfjord bridge won. The question is now whether the last word about this bridge has been said.

If grants are given the Dalsfjord bridge from 2009 on, in accordance with the plans, the bridge will be built. On the other hand, if not, and there is another round in the county council and even in the Storting, the situation may change. It is safe to say that the struggle for the Dalsfjord bridge is not over yet.

On the north side of the Dalsfjord, there is a glimpse of the so-called "geitestien" (goat path), the name given the unfinished road from Eikenes to Otterstein. The picture was taken from Grøneholten, south-east of Dale. To the left in the picture, the ferry quay at Eikenes.
Owner: Arve Ese - Date: 2005 - Photographer: Arve Ese
Arve Ese
2005
Arve Ese

View from Kringla on the north side of the Dalsfjord toward Dale. The bridge is planned to be built from Otterstein on the north side of the fjord (to the right) to Nishamaren on the south side (to the left).
Owner: Arve Ese - Date: 2005 - Photographer: Arve Ese
Arve Ese
2005
Arve Ese
resources:
Dalsfjordbrua, Prospekt over "Dalsfjordsambandet". Aksjon Dalsfjordbrua 1998.
Steffensen, H.P. og Fitje, Rune: Rv anlegg Eikenes-Nishamar. I Vegstubben, s. 31-33, nr. 2 og 3-1975.