The churchyard at Ervik

"Many were left (out on the sea) and will never rest in consecrated soil. And the ocean is tireless (..) nobody knows who will fall victim to the ocean. But close to the foaming ocean lies the graveyard at Ervik, hiding its dead as in protest against the ocean waves breaking against the western coast." (Dagfred Berstad) 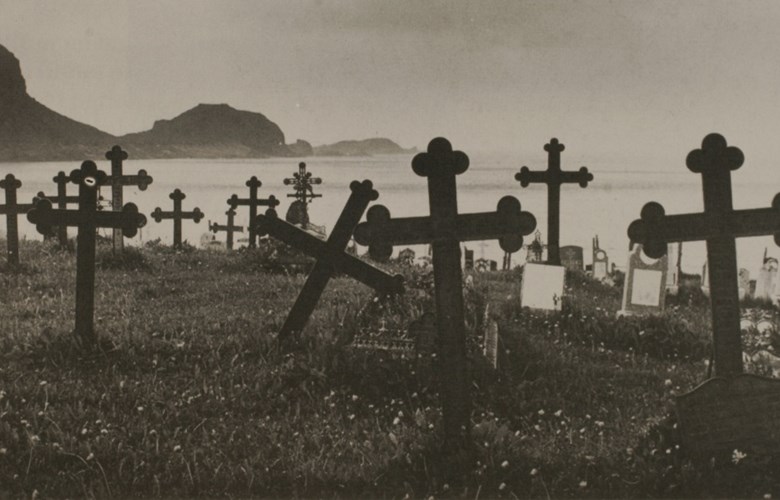 The churchyard at Ervik has more iron crosses than any other churchyard in the county. The churchyard is a timeless symbol of Olaf Tryggvason's christening mission, according to Vera Henriksen in her book Selja og Stad.

Funeral
In the same reference it was written that the vicar every year after Christmas travelled out to Ervik to officiate at the Christmas service. At the same time he took take of the funeral service for the graves that had been added since his last visit. Later on, this service was moved to midsummer. From funerals once a year, over time funerals could take place several times a year, until the present time when a vicar is present at all funerals.

Drifting sand
Throughout the centuries the graveyard has been changed because drifting sand has covered the ground in between the graves, thus creating a mound. It has never been necessary to add more soil. In some places there are at least three layers of graves. In 1945, when a mass grave for Russian prisoners of war was dug, they found old coffins that had been placed there at least a hundred years earlier.

Bell and bell tower
In 1906, the churchyard was extended and fenced in. Two years later a bell tower was built equipped with a bell from the Leikanger church. This bell had originally been in the old Bø church. In the 1920s, the bell tower was replaced by a concrete tower.
When the Ervik church (also known as the Ervik memorial chapel) was completed in 1970, there was no longer use for the bell in the tower on the churchyard. In 2005, a storage room in the building was turned into a memorial room in commemoration of the 21 Russian prisoners of war who were buried there from 1945 to 1953 when their bodies were moved to a churchyard at Laksevåg in Bergen.

Many grave memorials
The many different grave memorials at the graveyard testify to funeral ceremonies from days gone by. In the congregation magazine for Selje, Dagfred Berstad concludes an article with the following words:

"The old names are forgotten. People took their wisdom, life stories and destinies with them into the graves, but we do know that here our forefathers are buried, men who toiled at the oars, women staring out to the ocean, keeping the food warm in an anxious hope, kept quiet and put up with their destinies. They fought for their living, then as now, against the unstoppable forces of nature."