Seven men from the former municipality of Nord-Vågsøy lost their lives during the war 1940-1945. On Sunday 16 September 1945, there was a memorial service and on 17 May the following year, people from the whole municipality gathered to attend the unveiling ceremony of the memorial stone. The memorial stone was originally erected at the Raudeberg school, but was later moved to the church. 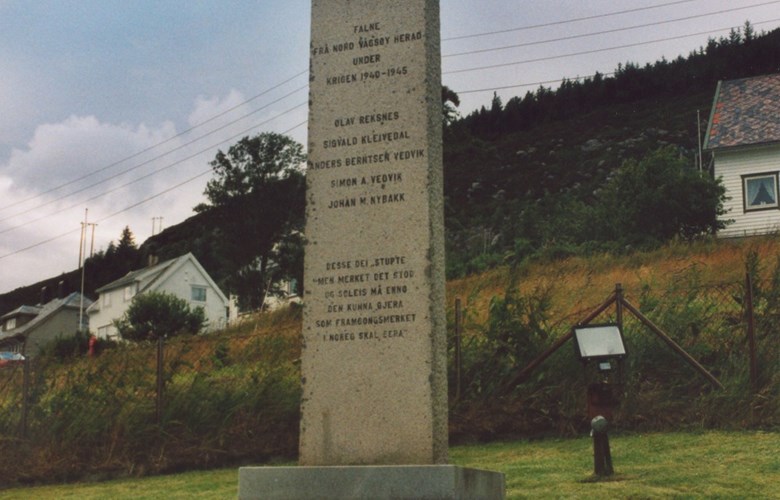 The memorial stone for the men from Nord-Vågsøy who died in the war stands on a slope above the road to the Nord-Vågsøy church at Røysaneset. From its base it measures 278 centimetres in height, 73 by 23 centimetres at the base and slightly narrower at the top.

The men from Nord-Vågsøy who lost their lives

In 1948, the Norwegian authorities published a book called "Våre falne" which contained short biographies and portraits. Of the seven who were connected to the former municipality of Nord-Vågsøy, (separated from the Selje municipality in 1908), three were killed in allied foreign trade, two on Norwegian naval vessels, one person during the Måløy raid, and one as a passenger on SS "Framnæs".

REKSNES, OLAV, engineer, Nord-Vågsøy. Born 5 November 1905 at Davik, son of Henrik Reksnes, born 1866 at Davik, and Anna née Haugen, born 1875 at Eid, Nordfjord. Married 1943 in England to Olive Manchel, born in Hull. Electrotechnical course, engineering school. Sailed in allied foreign trade, and lost his life on 5 May 1943, when the SS "Bonde" was torpedoed on her way from Swansea to Canada.

KLEIVEDAL, SIGVALD JOHANSEN, stoker, Nord-Vågsøy. Born 5 January 1913 at Selje, son of Johan J. Kleivedal, born 1871 at Selje, and Karoline née Vedvik, born 1872 same place. Went to sea at an early age, and sailed in foreign trade. During the war, he sailed in allied foreign trade as a stoker on SS "Fingal", and lost his life in May 1843, when the ship was torpedoed in the Tasman Sea on her way from Sydney, New South Wales, Australia to the Solomon Islands. 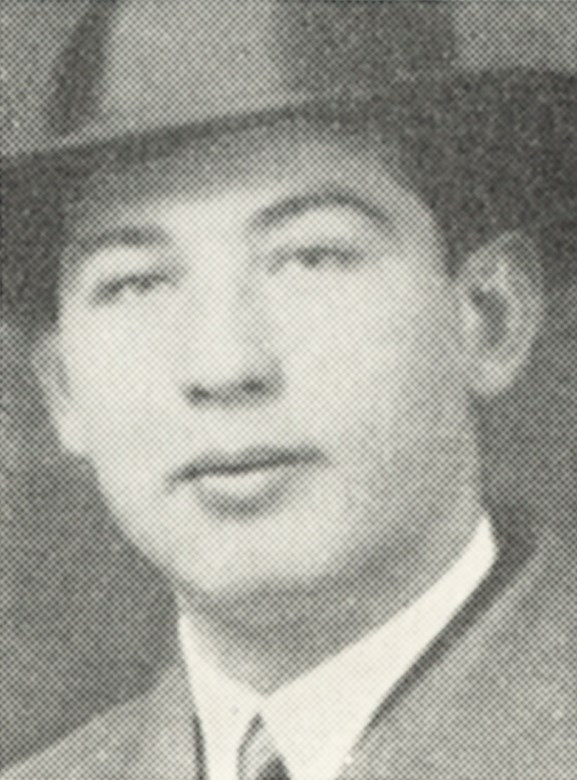 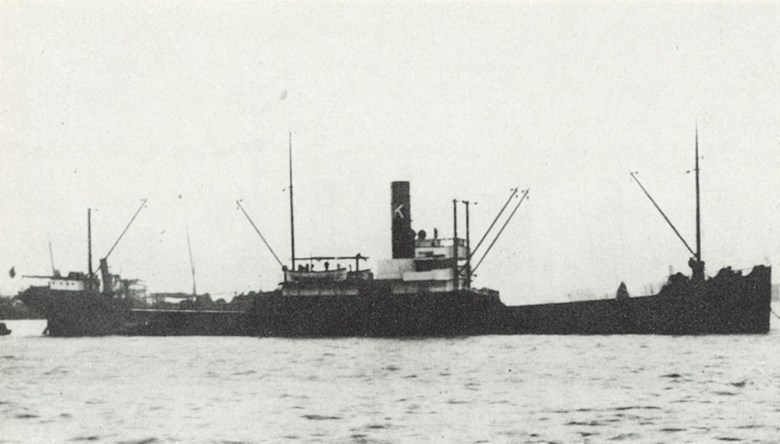 VEDVIK, ANDERS PAUL, fisherman, Nord-Vågsøy. Born 25 March 1920 at Selje, son of Bernt Andersen Vedvik, born 1889 same place, and Inga née Barmen, born 1896 same place. Navigation course. Was called up for work service, and therefore left for England in the autumn of 1941. He signed on SS "Annavore", and was killed on 21 December 1941, when the ship was torpedoed in the Atlantic, seven days out of Gibraltar.

VEDVIK, SIMON ANDREAS, petty officer, Horten. Born 27 November 1901 at Selje, son of Anders Abrahamsen Vedvik and Alette Didriksdotter. Married 1927 in Horten to Milly Bergljot Arvesen, born 1907 same place. Two children. Served on the submarine B2 and became chief engineer on the destroyer "Svenner". Died on 6 June 1944, when the ship sank off the French coast during the invasion.

NYBAKK, JOHAN, fisherman and farmer, Nord-Vågsøy. Born 13 March 1870 at Selje, son ofMatias Nybakk and Jenika née Tilvik, both from Selje. Married 1893 at Nord-Vågsøy to Alette, born 1867 same place. Five children. Was passenger on the local steamer "Framnæs", and lost his life on 8 November 1944 when the ship was attacked by planes on her journey between Måløy and Kalvåg. Buried at Nord-Vågsøy.

TORHEIM, RAGNVALD ANTONI, fishing-boat skipper, Selje. Born 6 August 1912 at Davik, son of Mons Torheim, born 1882 same place, and Lina née Teige, born 1885 at Herøy, Sunnmøre. Married 1936 at Rovde, Sunnmøre, to Emma, born 1907. One child. Navigation course. Was standby assistant in the Norwegian Lighthouse Service and a fishing-boat skipper. Lost his life during the Måløy raid on 27 December 1941 when he was hit by shrapnel. Buried at Nord-Vågsøy church. His brother Arthur Henry died in 1943.

A day dedicated to those who had died

In the summer of 1945, the Norwegian Government decided that Sunday 16 September should be dedicated to those who had died due to wartime actions. The flag would be raised at half-mast from morning until 1.02pm, when it would be slowly raised to the top of the flagpole. At 1pm, a two-minute-long silence would be observed. all over the country. In the announcement, people were encouraged to organize local ceremonies on that day.

At Måløy, Th. Iversen writes a poem called "De falnes dag"to mark the occasion
- and the fifth stanza goes like this (freely translated):

We erect monuments shining so bright,
in memory of those who did fall.
And put on their grave a memorial wreath,
but do not let this be all.

There was a memorial service at Nord-Vågsøy. The mayor, Leif Iversen, summed up the war years. Afterwards, the teacher Wilhelm Kvalheim gave a speech based on the bible text for the day, and the speech ended with a two-minute-long silence.
The cantor Maurstad read the names of those men from Nord-Vågsøy who had lost their lives and gave an account of their efforts and their destinies. Finally, Matias Orheim gave a speech and also read a poem he had written during the war, but that he had not dared to make it known until now. In the memorial service, the Raudeberg Band, the Vedvik and Refvik choir and Adolf Hals participated. Teacher Bøe and Bjarne Starheim played the organ. 500 kroner was collected for the bereaved.

The issue of erecting a memorial stone for those who had lost their lives was brought up in the municipal council on 6 October 1945. In the decision, the following words were used:

"When the Norwegian people today can live on as a free state on a solid democratic foundation, it is for us a clear duty to remember all those who made the ultimate sacrifice - their life - in their struggle for their mother country. In respect and gratitude for the effort these men did during the war, Nord-Vågsøy will honour its heroes by erecting a lasting memorial that can urge us and future generations to stand guard and protect our dear mother country." 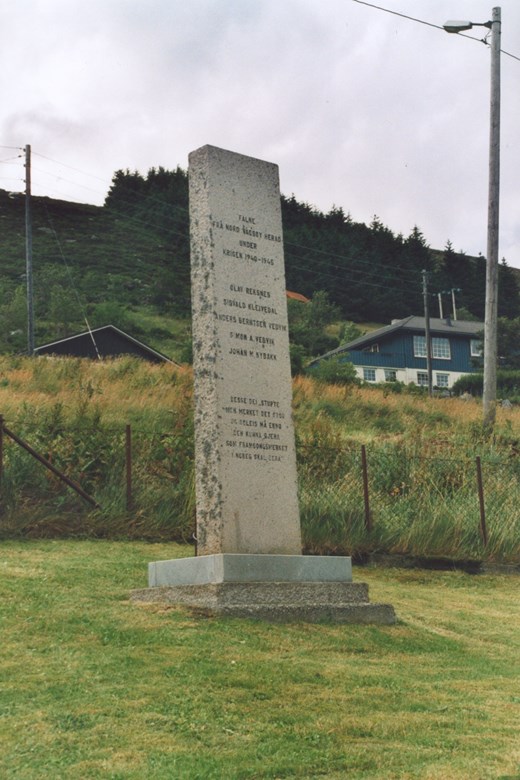 On 17 May 1947, people from the whole municipality gathererd at the crossroads of Kvalheim-Refvik for the unveiling ceremony.(Nord-Vågsøy church burned down in the autumn of 1945 and a new church was built on the same site 15 years later). The chairman of the organizing committee, Andreas Berg, wished everyone welcome and called on the principal Martin Birkeland to give the main speech. Afterwards, people sang "Ja, vi elsker" (the national anthem) before John Rutledal gave an account of the work of raising the monument. He also mentioned that another two names would be added to the stone. (This never happened). Rutledal concluded his speech by handing over the monument to the municipality of Nord-Vågsøy, and the municipal authorities promised to honour and look after the stone carefully.

SS "Fingal" from Stavanger was on her way from Sydney to Port Darwin, Slomon Islands, with cargo and ammunition when it was torpedoed by a Japanese submarine. The deck was blown up and seven men lost their lives in the explosion. Some of the crew were blown overboard, and "Fingal" sank in a mater of minutes. Twelve men died.
Owner: I <i>Nortraships flåte 1942-1945.</i> - Date: Ukjend. - Photographer: Ukjend.
I <i>Nortraships flåte 1942-1945.</i>
Ukjend.
Ukjend.

The inscription on the memorial stone is divided into three sections. The words in the upper section: FALLEN * FROM NORD-VÅGSØY * DURING * THE WAR 1940-1945. The follow five names: Olav Reksnes, Sigvald Kleivedal, Anders Berntsen Vedvik, Simon A. Vedvik and Johan M. Nybakk. In the lower section, the following words are inscribed: These men "they fell, but the standard stood, and likewise must men do in order to bear the standard of progress in Norway." The words in inverted commas are an adaptation of the poem "Tord Foleson" by Per Sivle. The fifth stanza goes like this: "And the old story says it like this/that Tord he fell but the standard it stood./And likewise must still/men do/ if the standard of progress in Norway he must bear."
Owner: Fylkesarkivet i Sogn og Fjordane. - Date: 2002. - Photographer: Hermund Kleppa.
Fylkesarkivet i Sogn og Fjordane.
2002.
Hermund Kleppa.
resources:
Våre falne 1939-1945. Den norske stat. 1948.
Fjordenes Tidende. Måløy. 10.09, 13.09, 20.09, 15.10.1945 og 22.05.1947.