Korssund is situated in the bay of Korssundosen, north of the Åfjord and south of the Vilnesfjord. With smaller boats it is possible to sail into the Vilnesfjord through the narrow strait of Lammetunsundet. There is also a road leading to this place, built in the 1960s. We still find a grocery shop and a post office at Korssund. From ancient times, Korssund was part of the municipality of Askvoll, but after the municipal border regulations in 1992, it now is part of the municipality of Fjaler. 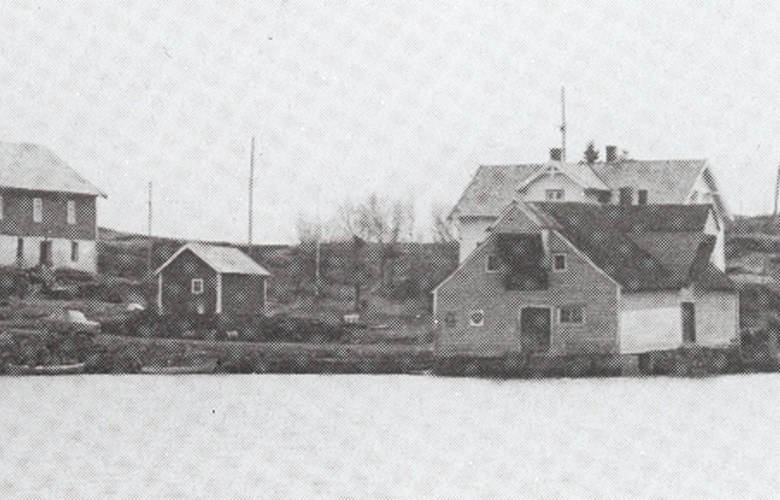 Korssund in 1972. The outbuilding in the picture is now replaced by a new one. The medieval stone cross is located to the right of the main building.

The place name of Korssund is derived from a huge stone cross that was erected there in about the year 1000. The cross stands just to the south of the residence at Korssund. The cross site was used as a fairground (?). Korssund is a convenient meeting place with a good harbour.

From as far back as the 17th century, Korssund had an inn, and this was probably the first one in the region of Askvoll and Fjaler. For travellers from Bergen on their way north, Korssund was the first inn they came to in Sunnfjord. Everybody travelling between Sunnfjord and Bergen had to pass this place, with the exception of those who travelled along the outer shipping lane through the strait of Steinsund in Solund.

The first person we know for certain who was an innkeeper at Korssund was Zacharias Michelsen Bech. There is a reference to him as an innkeeper in 1629. In 1618, he received his papers as a citizen of Bergen. Bech also owned the island of Hatløyna in the Øen "sokn". This island has since been named Sakrisøyna after him. His descendants were called Griil.

Throughout the 18th and 19th centuries, Korssund was one of the most important inns in the area. According to a reference in 1742, the place was very important for travellers. The place was referred to as an old privileged inn and a posting station, as well as a necessary harbour for boats.

Elias Hiortdahl bought Korssund in 1800. Hiortdahl is also said to have started trading at the place. In 1801, one housekeeper, three male and four female domestic servants were in his employment. Throughout the 19th century, Korssund was both a trading post and an inn. Hiortdahl sold the place to Johannes Saarheim from Jølster in 1810. When Saarheim died in 1820, his widow took charge of the business. She married Anders Olsen Strømmen and they ran the place until 1849. Strømmen is referred to as an innkeeper, whereas his descendants are called shopkeepers. In 1845, they had two male and three female servants. In the 1865 census, Hans Clausen Lund is referred to as a shopkeeper, whereas Mathias Guldbrandsen Spord was a farmer. A total of 13 persons lived at Korssund. In 1890, the place was owned by Johannes Helenius Nordstrand. In 1886 or 1889, a post office was established there, and since that time the place has had some form of postal service.

In 1872, the county council discussed a proposition to make the trading post of Korssund a scheduled stop for the steamer. In 1877, Korssund is included in the county steamship company's timetables as a so-called "asterisk (*) stop", implying that the steamer stopped only if there were passengers or goods to or from the place. In 1886, there is a reference to Bertel Johnsen from Knarvik as a shopkeeper and shipping agent. He lived in Røysa below Luten.

In 1897, the board of directors of "Fylkesbaatane" (the county steamship company) discussed an application from Johan R. O. Skaar concerning financial support to build a quay at Korssund. However, no immediate response was given. Two years later, there was still no money allocated for the new quay. The quay was built in 1902, but not at the same site as the trading post.

On a painting of Korssund from about 1850, a big house with a hip roof dominates the place.
A number of the Korssund buildings were destroyed in a fire in the autumn of 1893. The present residence was built shortly after the fire. In 1894, the warehouse on the quay was sold and transported to Bergen to be rebuilt there. The southern part of the residence has since been rebuilt as a shop.
Kjell Skår built a new shop in 1978.

Johan Reinhard Skår from Hyllestad had a grocery shop in Korssund in 1900. He took over the place in 1892. Johan Skår ran the shop in addition to the post office, and other businesses and facilities linked to fisheries. The deed for the property was transferred to his sons Olaf and Reinhardt in 1928. They ran the place together until 1933, when they split up. Reinhardt kept the shop and the post office, whereas Olaf took charge of the quayside activities linked to the warehouses and boathouses with a sawmill, a barrel factory and a facility for salting (curing) herring. Reinhardt Skår stayed in business until 1962 when his son Kjell took over. Kjell Skår and his wife continued the work in the shop, at the same time as he worked as a postman. By and by, he also became a post office manager. The post office was later re-organized as a "post office in shop" and later on a postal depot. The couple quickly realized that it might be worthwhile to develop facilities for the many leisure boats cruising up and down the coast. Consequently, they built a 100-meter-long floating pier at Korssund. Besides, they built excellent facilities containing shower, toilets, and laundry rooms. In 1999, the county council's project Industrial development of leisure-boat tourism in the county of Sogn og Fjordanereceived "The Boat Award of the Year". Korssund was one of the places taking part in this project.

At the turn of the millennium, a new generation has taken over the business, but Kjell Skår still owns the place. In 2001, 12 families lived in Korssund.

Some of the members of the Skår family by the stone cross that has given its name to the place. The cross is said to have been erected in memory of Saint Olaf.
Owner: Laura Skår - Date: 1960. - Photographer: Ukjend.
Laura Skår
1960.
Ukjend.