The pale linden tree in the Nærøyfjord - a botanical curiosity

Close to the head of the Nærøyfjord, a short distance up from the sea straight across the fjord from Bakka, we find the pale linden tree (lime tree). A strange tree that was protected by royal decree as early as in 1934. This tree is a good example of a tree that can be designated a culture tree, a tree that for a long period of time has held a special place for many people. 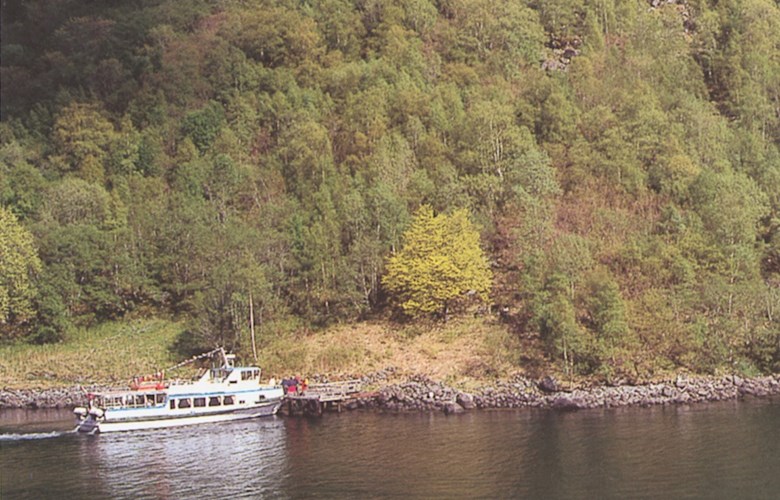 The pale linden tree located at Bleiklindneset is now about 115 years old and it is said to be a stump shoot from the tree that the county governor G. P. Blom observed there in 1823. In the summer of 1996, the "Bleiklindi" measured 22 metres in height. The trunk - split about half a metre up from the ground, has a circumference at chest height of 175 centimetres and 105 centimetres, respectively.

An excellent case in point is the pale linden tree in the Nærøyfjord. The reason why this linden tree has become such a famous culture tree is the fact that the foliage is yellow in spring, turning green in the autumn, quite the opposite of what we can expect with deciduous trees. 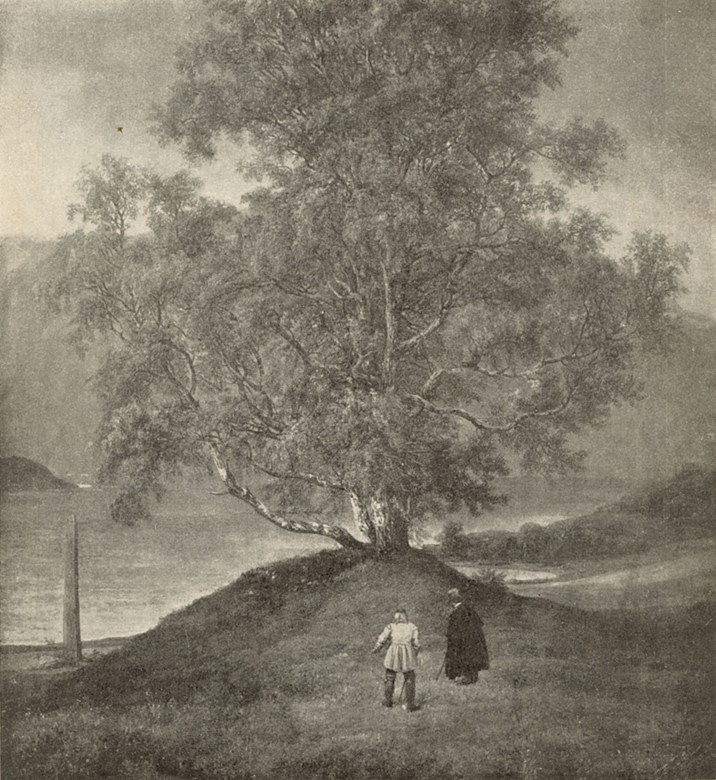 60 years ago, the teacher Per Hatlelid wrote about the pale linden tree in the local paper "Sogns Tidend". It is an interesting article that is still relevant today. The following is an excerpt from the article:

"Far into the Nærøyfjord, straight across the fjord from the Bakka church stands a strange linden tree. People tend to call her "Bleiklindi" (the pale linden tree). What is special about this tree is the fact that when leaves come out in spring, they have a yellow colour. For this reason the single linden tree stands out from the other deciduous trees in the vicinity that have their normal green foliage. The yellow colour lasts for a while, but gradually turns green. When the other trees turn yellow in the autumn, this pale linden tree is completely green, and when leaves fall, they are still green.

As early as in 1823, there is a reference to this linden tree by Gustav Peter Blom, who was then county governor of Buskerud. He had on one occasion travelled along the Nærøyfjord, and as he was interested in botany, he had noticed this unusual tree and had included his observation in his book on plants. However, in the botanic literature from that time, there is no reference to this linden tree. There is no reference in Schübeler's great work which is so full of information about strange trees, nor do we find anything on the subject in Axel Blytt's study of the Sogn flora.

However, tradition has it that the present linden tree is not the same as the one that was found there 110 years ago. There actually is - or has ever been - no other tree like it in the whole world. Consequently, the "Bleiklindi" in the Nærøyfjord is a rarity, and professor Holmboe has classified it as an original species under the name of Tilla cordata Mill."

The wording of the protection decree

"Bleiklindi" was protected by royal decree of 26 May 1933 along with a number of other trees in western Norway. The following is an excerpt of the protection decree:

(..)"In accordance with §1 in the law of the protection of nature of 25 July 1910,(..) the following trees shall be protected against harm or destruction of any kind: (..) 4. "Bleiklindi" at the point of Bleiklindneset at Hatle-Styve, farm # 2 holding # 58 in the municipality of Aurland. (..) The protection decree is to be announced with a notice at the sites.(..)". 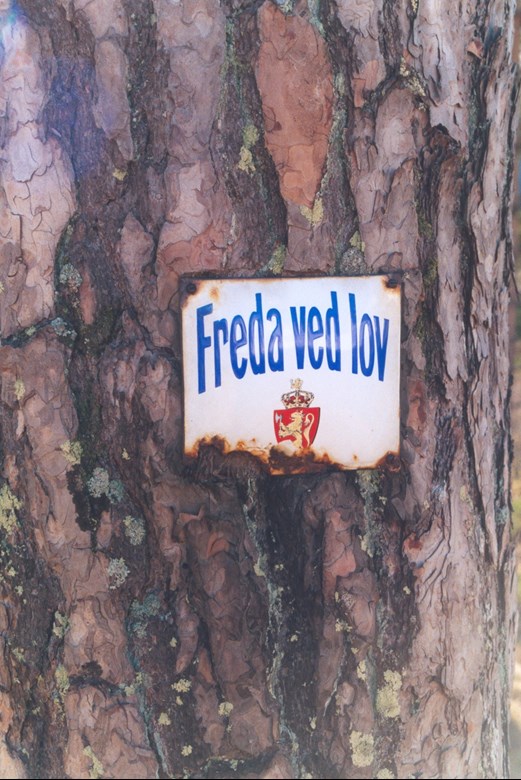 We notice that in 1934 the "Bleiklindi" - in the protection decree wording - has given its name to the point where it now stands. This place name still exists. A short section of the oldest postal road between Bergen and Oslo goes from the point of Bleiklindneset to Styve further east in the Nærøyfjord. The Public Roads Administration uses "Bleiklindi" as a place name in a list of cultural sites Bleiklindi - Styve. 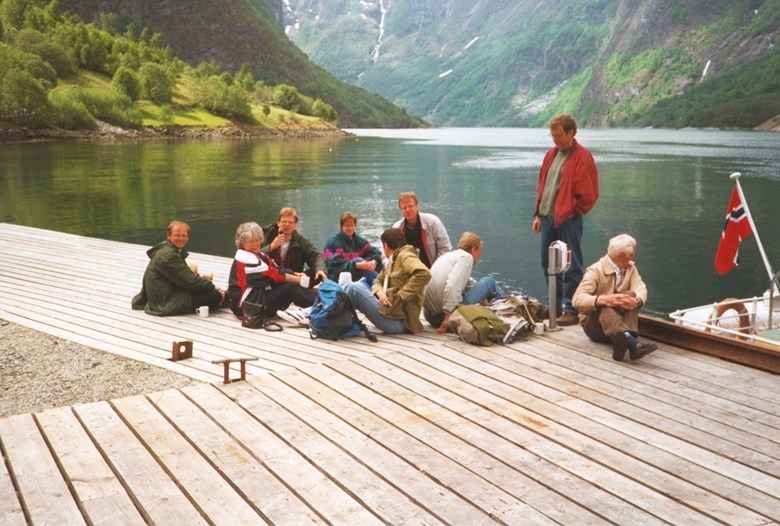 At the Styvi dockside. From this place went a short section of the old postal road between Christiania (Oslo) and Bergen eastwards along the Nærøyfjord to the "Bleiklindi" straight across from Bakka, behind the point in the picture. The road is today used as a hiking trail.
Owner: Fylkesarkivet i Sogn og Fjordane. - Date: 1995. - Photographer: Hermund Kleppa.
Fylkesarkivet i Sogn og Fjordane.
1995.
Hermund Kleppa.

The Slinde birch is one of the most famous "holy" trees in Norway. It stood on the mound of Hydneshaugen at Slinde in Sogndal. According to legend, there was a treasure hidden in the mound, protected by a snakelike fabulous animal. Sacrifices were often made to the birch, and the Norwegian poet Welhaven wrote a poem to this tree. The Norwegian painters I. C. Dahl and Fearnley both painted the birch. The tree was felled in a storm in 1874. This is a photograph of Dahl's version of the birch tree. The monumental stone to the left is now also gone. - Photographer: J. C. Dahl: Slindebirken (Målarstykke).
J. C. Dahl: Slindebirken (Målarstykke).
resources:
Hatlelid, Lars: Stykke om Bleiklindi i Sogns Tidend. 1934.
Norsk Lovtidend. 1933.