The village of Flåm 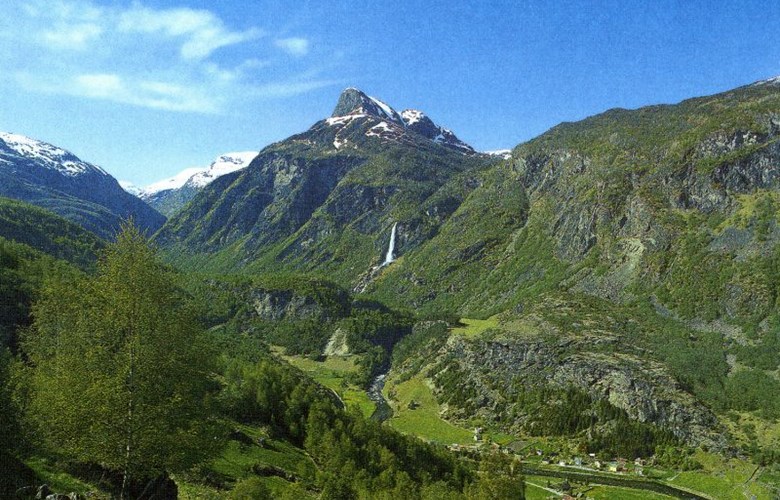 The valley of Flåmsdalen seen towards the mountain of Vidmenosi.

On the basis of topography, vegetation and archaeological finds, the archaeologist Svein Indrelid is of the opinion that Fretheim and Flåm must be the oldest farms in the village of Flåm. On both farms there were originally extensive burial areas, and finds from the early Iron Age indicate that the two original farms must be at least 2000 years old. The earliest finds from other farms such as Brekke date from the Viking Age, that is, the period between 800 and 1500 AD. The dating of these finds, in addition to the topography of the area, gives reason to believe that the Brekke farm was separated from Fretheim some time in the course of the late Iron Age (600-1050 AD).

The extraction of bog iron in the mountains

At the same time as the first people settled down in the valley, there was a substantial extraction and forging of iron in the mountains surrounding the valley of Flåmsdalen, by the lakes of Seltuftvatnet and Ryggvedlevatn, as well as in the valley of Gudmedalen. In addition to this activity, traces in pollen diagrams have been found, indicating grazing activities. This shows that there may have been farmers from Flåmsdalen who operated iron forges and used the mountain areas as summer pastures.

From two original farms in the early Iron Age, more farms and crofts were established in the village until the 19th century. Even if most farms were good, the village experienced periods of general decline and hard times as a result of pests in the late Middle Ages, in addition to war in the 17th and 18th centuries. As was the case in the other villages in the Aurland municipality, Flåm experienced a wave of emigration in the 19th and 20th centuries. Some of the first people to emigrate from Aurland came from Flåm, consisting of a family of four who until then had lived at the Midtgarden farm. They crossed the Atlantic from Bergen to America on "Juno" in 1844, and spent five and a half weeks on the voyage. Records show that as many as 500 persons emigrated from Flåm to America in the period between 1844 and 1914.

The transformation of the rural community

It goes without saying that the massive emigration drained the village of people and resources, and, on top of that, the emerging industrialization demanded much labour. These conditions made it hard to keep on with any traditional farming operation. Consequently, barter economy gave way to money economy, agriculture was mechanized, and the farmland was parcelled. The parcelling of land meant that the traditional cluster farmyards and parallel rows of farmyards were split up and new separate farmyards were established. The old system of strip farming was abandoned and the cultivated area was turned into bigger and more user-friendly units.

The Navvy's Road was a result of the building of the railway line between Bergen and Christiania (Oslo) between 1894 and 1909. In order to be able to build the railway line the need arose for construction roads from the villages up to the mountain plateau. The Navvy's Road stretches from the station of Haugastøl to Myrdal, down to Flåm and to Voss. The highest point of the road is 1300 metres above sea level. Those who built the railways in Norway were called "rallarar" (navvies), which later gave the road its name. During the most hectic construction period about 2400 workers were employed on the Bergen railway line.

In 1974 "Rallarvegen" (the Navvy's Road) was re-opened as a bike trail, but the interest for using the road did not pick up until the late 1980s. After this time the bike trail has become a popular tourist activity, used by about 20 000 bikers every year. This road is an excellent example of the construction methods used in the early 20th century, with its original stonewalls and bridges from the construction period.

The Flåm Railway passes along the narrow valley of Flåmsdalen with its dramatic west-Norwegian countryside of steep mountainsides, cascading waterfalls and rivers. This 20-kilometre-long railway line is one the major tourist attractions in Norway. The idea for such a railway line was put forward when it was decided to build a railway connection from the main Bergen Railway down to the Sognefjord. Only in 1916 was it decided that the line was to be constructed from Myrdal down to Flåm. This short side-line had a rather long construction period from 1923 to 1940. On account of the steep terrain tunnels had to be built on one third of the total distance. Avalanches and accidents were commonplace throughout these years.

The Flåm Railway has been operated since 1941, and today it must be looked upon mainly as a regular tourist line. In the old station building at Flåm we find the Flåm Railway museum with exhibits on the railway history as well as objects and artefacts from the construction period.