The people of Kråkenes have always been faced with bad landing sites. There were five known sites: Storehola, Keila, Stiksvika, Bleke and Synstestøa. In 1933-38, a road was built to Kråkenes from the Kvalheim farm. 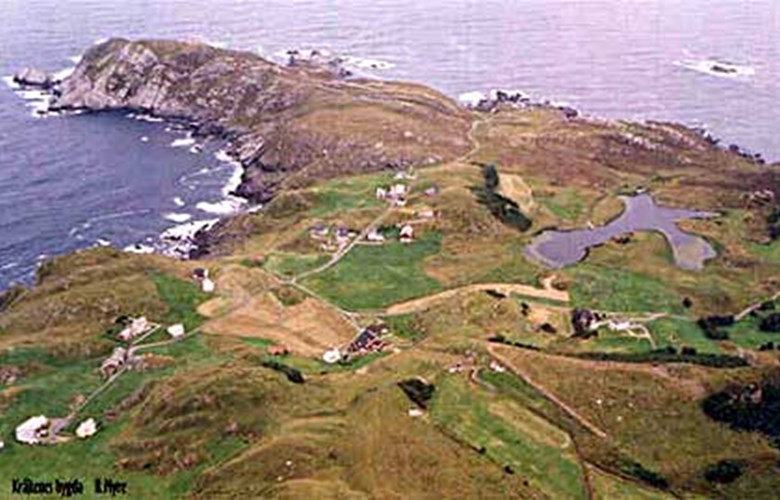 The hamlet of Kråkenes is situated at the very tip of Vågsøy with the open ocean as its next-door neighbour, and thus it is always exposed to the elements.

The people of Kråkenes have always had bad landing facilities. At no place along the shores of Kråkeneslandet are there any inlets or bays to provide sufficient shelter from the elements. Besides, the waters are shallow and treacherous. Five different landing sites along Kråkeneslandet have been used and they all proved tricky. They shifted from one site to another depending on the weather conditions. Storehola was much used in the summer when there were northerly winds and the waves were usually smaller. A boathouse was located there, and the rowboats with five pairs of oars were stationed there in the summer as this was the easiest spot to drag them ashore.

Another landing site was called Keila. This was the main boat-landing site because it was the shortest distance to the farms. In calm summer weather it was not necessary to pull the boats ashore as long as they were tethered fore and aft. The disadvantage was that it was a distance of 60 metres up to the boathouses, and even an uphill stretch of about 12-13 metres. Nevertheless, at high tide and favourable weather the water could reach all the way up to the boathouses. The entrance to the landing site was shallow and narrow, with a rock obstruction in the middle. This was blown up in 1905 when the lighthouse was built. At the same time a crane was installed to hoist the rowboats. Later on the local people of Kråkenes levelled and built a concrete road from the crane up to the boathouse.

The Germans built a jetty

The Germans tried to build a jetty at Keila at a place called Solveggen. They spent a lot of money on the project, but massive waves swept the construction to sea. There is now no trace of this project.
Stiksvika with its boathouse was only used for the so-called Kråkenes "jekt" as long as it lasted. The big sailboat was used for voyages to Bergen. At Bleke a crane and a boathouse were built, and it was normally possible to get ashore there. If not, they had to go all the way to Refviklandet or Televika. Synstestøa is the fifth of the boat-landing sites at Kråkeneset. It is located on the western side and was much used in good weather in summer for small-scale fishing. The smaller boats could be left out on the water for several days if there was little wind.

Financial aid on its way

From 1907, many applications were sent to the Norwegian Coastal Administration asking for means to repair and improve the landing facilities along the Kråkeneslandet. The Coastal Administration, however, came to the conclusion that the expenses would not match the benefits. The outcome was that people applied for means to build a proper road between Kråkenes and Kvalheim. According to the County Road board, it was estimated to cost 160 000 kroner. The people of Kråkenes would contribute one tenth of the cost, the county six tenths, and the local council was supposed to cover the rest of the sum. The financial situation for the municipal council of Nord-Vågsøy, however, made it impossible to contribute their share of the expenses, and the Norwegian Coastal Authorities eventually allocated 31 800 kroner to the road project. The Administration realized that this was a better alternative than trying to do something with the landing facilities. The road was completed between 1933 and 1938.

This is one of the five boat-landing sites at Kråkenes. The harbour consists of relatively old boathouses, but these are well maintained, and there is even a crane to hoist the boats up on dry land.
Owner: R. Myre. - Date: Ca. 1999. - Photographer: R. Myre.
R. Myre.
Ca. 1999.
R. Myre.