Fagerlia is located close to one kilometre from Totland (RV 15) on the road up to the farm Fagerlia. In former times most farmers at Totland had a "gardfjøs" there. One remaining "gardfjøs" still covered with a roof has an entrance door with bear protection. 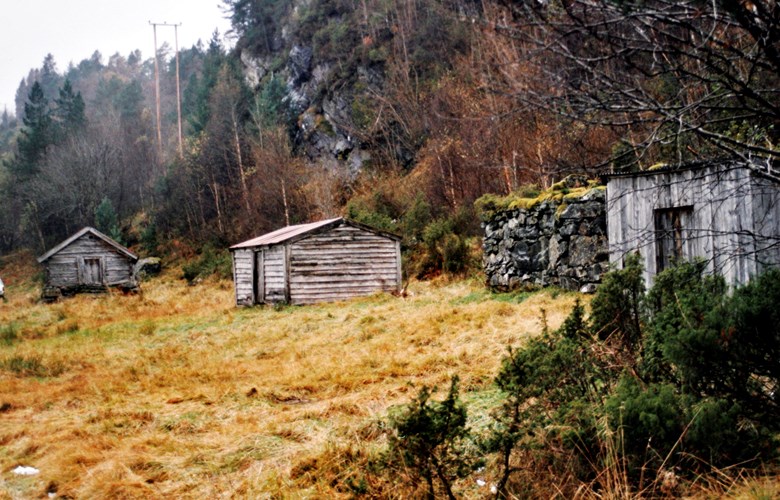 Kleivane is located close to one kilometre on the way from Totland to Fagerli. Between the two wooden buildings to the right, we can see the stonewalls of an older "gardfjøs". The "gardfjøs" to the left has a door with bear protection.

"Gardfjøs" is the term used for a "summer cowshed" that was located not far from the farm. These were small sheds where cows and goats were taken in to be milked. Kleivane - where many of these sheds were located - were actually "spring sheds" for the holdings at Totland. Later on in June, the animals were led up to their summer pastures in the mountains.
Now we find remnants of a cowshed built in stone, and a well-preserved cowshed with bear protection on the door.

Bear protection on the door

The bear protection was in fact a reinforcement of the door. On either side of the door, a vertical board was put up with openings against the wall. In these openings, horizontal boards could be inserted, all the way up to the top. In this way, the door was completely covered and prevented bears from breaking in.
Elsewhere in Vågsøy there are remnants of "gardfjøs" with the same type of bear protection, for example at Nave.

Story of an aggressive bear

There is a story about a bear that tried to attack those who were looking after the cows at Kleivane. One of the milkmaids had the presence of mind to light a piece of birch bark and set the bear coat on fire. The bear was frightened and ran down towards the river. At Stomnevikane it ran into the dam and drowned.