Kapellneset - the first church site on the island of Vågsøya

The first church building on Vågsøy, a chapel church, was built in 1580 on a point south of Raudeberg. This point was later called "Kapellneset". This church was torn down shortly after 1853 when a new church was built at Røysa at Raudeberg. In 1922, a wooden belfry was erected on the old church site, and ever since annual services have been officiated there on 29 July (St Olaf's Day). Later the wooden memorial was replaced by a stone belfry. 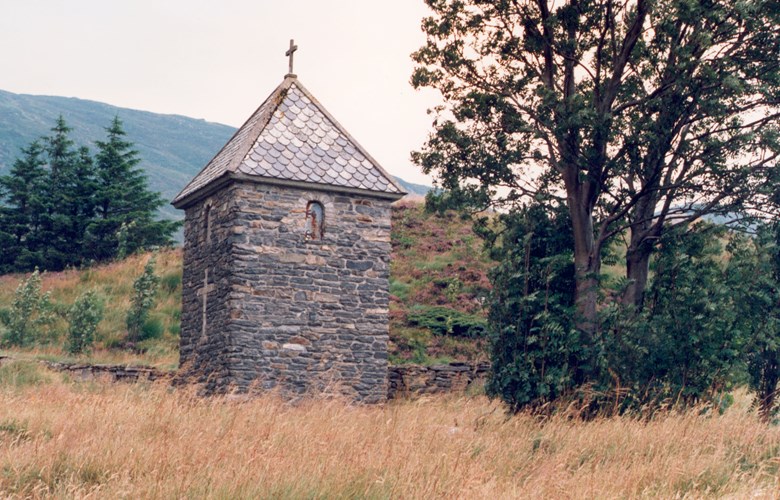 The present belfry at the church site at Kapellneset was built in 1944, and is a copy of the St Albanus Tower on the island of Selja. Formerly there was a wooden memorial belfry, built in 1922.

At present the church site at Kapellneset is a highly visible and well-kept cultural monument in Vågsøy. The old churchyard wall encircles the yard and the site. In 1922, a wooden belfry was erected to mark the old church site. Unfortunately, this wooden construction could not withstand the effects of wind and weather, and was replaced by a bigger belfry in stone in 1944. The tower, which has two floors, is a copy of the St Albanus Tower at the cloister ruins on the island of Selje. The church bell is the bell from the chapel church and this again dates back to the Middle-Age church on the island of Silda. The stone slab at the entrance to the belfry was formerly at the entrance to the chapel church.

"Vaagsø Capel" at Kapellneset replaced an earlier chapel on the island of Silda. This was a very small and low church without a steeple, about eight metres long and some six metres wide. In the eastern part a square chancel was added, some four by four metres. The entrance was on the northern wall, close to the western wall. The height up to the rafters was probably only about three metres. Originally the roof was covered with peat, but later replaced by tiles. The county governor Collett was not particularly impressed when he in 1643 characterized the first church on Vågsøy in the following words: "Vaagsø Capell resembles a common, ugly barn". What the people of Vågsøy thought of their own church we do not know anything about. What probably mattered most to them was that they had a church to go to that was not too far away.

Gradually the need for a new church became more urgent. People had to build supports to prevent the church from tipping over to the north. Another factor was the population increase in the 19th century, which meant that many people had to stand outside during the service. The graveyard was also too small. In 1847, the dean Koren put forward a proposal to build a new church at Røysa. The last service in the church at Kapellneset took place on the Second Day of Whitsun, 16 May, 1853. Shortly afterwards, the church was sold to the merchant Ole Smidt in Måløy.

The church bell that went astray

The present bell in the belfry at Kapellneset is the same as the one which used to hang in the chapel church there. The church bell was missing for many years, but in 1922, the bell was returned to its rightful place when it was installed in the belfry monument called "Memorial of our Forefathers". The church site committee eventually found the bell on the property of bailiff Lem in Sogndal where it had been used in the storehouse. The bailiff showed his goodwill and generosity by returning the bell to the committee free of charge.