Kvammen chapel is a local church community centre built in concrete and red brick in the village of Kvammen, on the southern side of the Førdefjord in the municipality of Askvoll. The church, with a seating capacity of 300, was consecrated on 27 November, 1977, by the bishop Thor With. The chapel was designed by the architect Alf Apelseth from Ørsta. Kvammen "chapel district" is a part of Askvoll "sokn" in the parish of Askvoll.

The local church community centre at Kvammen has the form of a lopsided pyramid, a somewhat untraditional form. Kvammen belonged to the municipality of Vevring prior to the municipal border changes in the 1960s.

When Kvammen chapel was completed, some people in the village thought that there was a limit to what they could tolerate as far as artistic expression was concerned, comparing the church building to a crashed aeroplane. However, today the general opinion is rather that Kvammen has a fine, user-friendly church.

Kvammen chapel, located in the eastern part of Askvoll, is one of the most modern churches in our county. The most conspicuous architectural feature is the roof. It has the form of a lopsided pyramid with its apex above the altar. This solution replaces a steeple and spire. Along the slanting ridge of the roof there are windows. This solution breaks with the otherwise square character of the house, and it also provides good lighting inside the church. The altar section is situated in the eastern corner, and the rows of chairs are placed diagonally in relation to the altar.

The interior architecture is simple with an altar made of pine, rust-coloured chairs, and red-brick walls. Nails in the wall function as a hymn board. The many globe lights hanging from the ceiling provide good lighting in the church room, coupled with the oblong windows up on the walls.

The local community centre also contains side rooms that can be used for meetings or as dining rooms. On special occasions they can also be used as an extension of the main room. When the partition doors are opened, the seating capacity is some 300, while the main room can seat about 120. In addition to the rooms referred to above, the church also contains a vestry, a kitchen, toilet facilities, and a cloakroom. Having all rooms on one floor makes the church very user-friendly. The 12-metre-high (about 40 feet) free-standing belfry is linked to the main building with a low brick wall.

Church at Kvammen?
It took many years from the start of the discussion of a church at Kvammen until the construction was finally completed. As early as 1843, the issue was raised to choose a church site at Kvammen instead of at Vevring. The north-eastern part of the present municipality of Askvoll then belonged to the municipality of Vevring, but the choice was eventually made in favour of Vevring. In the 1930s, a committee was appointed with a mandate to look at the possibility to build a church or a chapel to the south of Vevring. The committee managed to get hold of a building site, but the war put an end to the planning process. In the early 1960s, the issue was first raised in the local council of Vevring, and then in Askvoll, after the municipal borders were changed, and the southern side of the old Vevring municipality became a part of Askvoll.

In 1964, the basement of the school building at Kvammen was consecrated as an interim church pending a new church building for the community. The reason why the planning process dragged on for some years was mainly the difficult economic situation, coupled with parallel plans for a new school at Gjelsvik.

The church issue took an important step in the right direction in 1970 when the executive committee of the Askvoll local council resolved to find a suitable building site and also to contact an architect who could design a modern church building. The commission was given to Alf Apelseth, the architect who had designed the Nordsida church in Stryn. But what about the building site? People representing various parts of the local community naturally differed in their opinions of a possible church site. The issue had now boiled down to three alternatives. The first alternative was in the vicinity of the graveyard at Gjelsvik, the second on a hill between Kvammen and Gjelsvik, and the third on the farm of Ålen at Kvammen. After some discussion and a number of "sokn" meetings, the final choice of location was Kvammen, following the recommendations both of the "sokn" council and the architect. 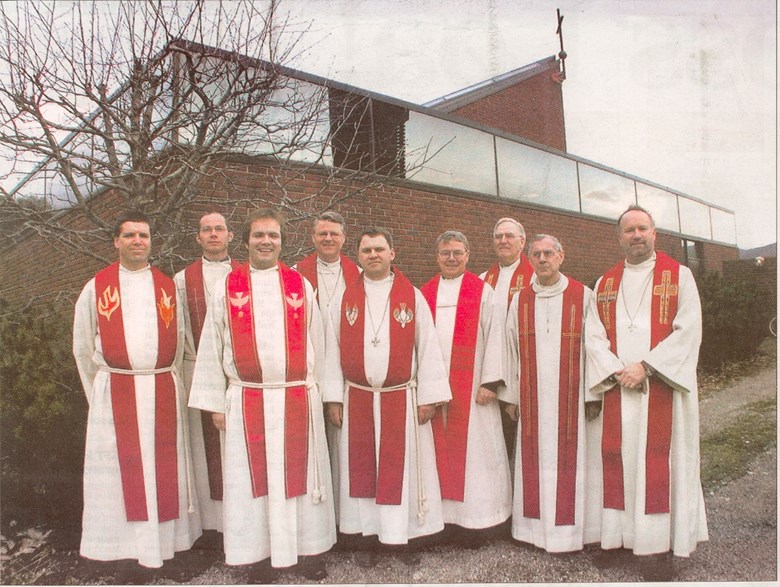 Most of the interior dates from 1977. Oddmund Ask has made both the pulpit and the font. The font consists of 120 small wooden chips glued together. The baptismal bowl in silver dates from 1964, and it is a gift from the Nybrot farmer women¿s union. The holy water ewer is also in silver.

A seven-branched candelabra. A tapestry from 1990 with the motif: "Behold, the bridegroom cometh; go ye out to meet him" (Matthew 25;1-13), made by Aud Sørheim Myklebust.

The church bell is made by "Olsen Nauen Klokkestøperi AS", and this is also a gift from the Nybrot farmer women¿s union. The organ - a so-called "Vestre harmonium" - was originally made in 1954 by "Vestre Orgelfabrikk".