In 1942, the landowner of Gottraneset had to move from his farm to Berle. The following year the Germans moved their guns from Berle out to new positions at Gottraneset. 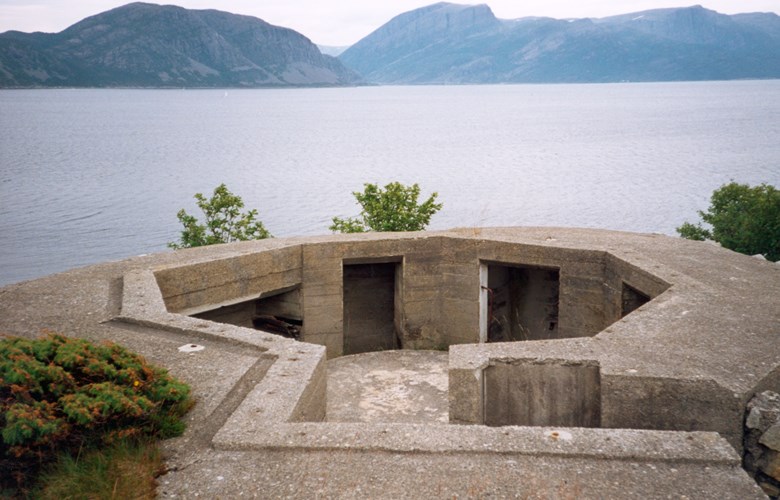 Position for German 20mm Flak 38 anti-aircraft gun at the top of the hill Gottrahaugen. We see across the waters of Frøysjøen to Ospeneset where there also were gun positions.

The purpose of the coastal fort was to have guns that could hit targets in the waters of Frøysjøen, and in this way block the entrance to Nordfjord across the Frøysjøen. The guns were originally installed further inland at Berle, but in the spring of 1943, the whole battery was moved to new positions at Gottraneset at Skarstein. Under the command of "Organisation Todt" - a Nazi engineering and construction group - a large operation was started to build a mountain facility. Inside the hill called Gottrahaugen, three huge mountain halls were blasted to be used as accommodation. From one of the halls, a staircase would lead up to a two-storey bunker which would serve as a command post for the battery. The bunker was meant to have an observation room, a command telephone and a communication room. The bunker was never used, and only one barrack in the halls was completed. A separate tunnel was also blasted through the hill to store ammunition.

The artillery of the battery was four French 105mm field guns, and three guns were installed at positions down at the point, whereas the fourth was located to the west of the hill Gottrahaugen. Towards the end of the war, the guns were mounted on fixed carriages that are still found at their positions. The guns could fire shells at targets with a range of 16 000 metres. The coastal fort also had two anti-aircraft guns, two defensive guns, a mortar, machine guns and a flame-thrower in case there was a direct attack on the coastal fort.

Facts on the coastal fort at Gottraneset:

A few days after the German capitulation on 8 May 1945, the German troops left to be interned at Stryn, and in June 2 770 landmines were taken up and removed. Shortly afterwards, all gun barrels were removed, and in the autumn all ammunition was to be dumped. During this work, a barge loaded with high-explosive shells drifted close to the shore where it sank. The shells remained there until 1974 when they were blasted by the military. The kitchen barracks still remains and was used after the war by the local youth association until a new building was raised close by. The mountain halls are also empty, and they have actually been used in connection with major events and occasions.