The shipping lane along the coast has always passed through the strait of Ulvesundet, between the island of Vågsøya and the mainland. The small island of Måløyna with the old trading post is centrally located in the strait. Today it is the town on the island which now carries the name of Måløy. 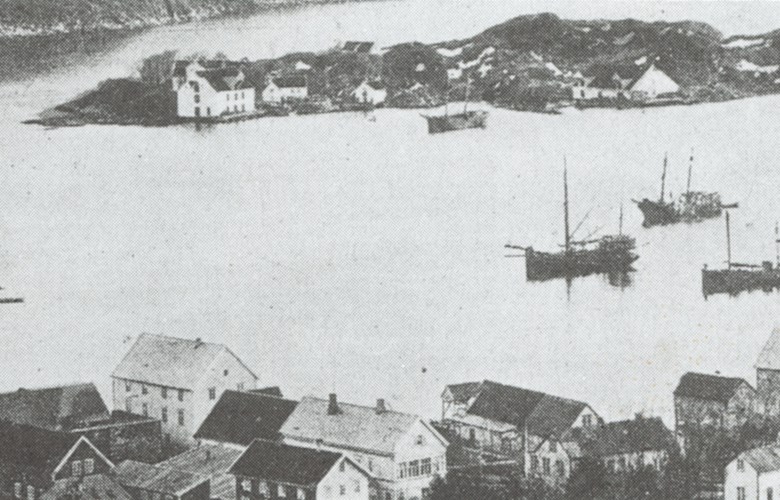 Måløyna seen from the town of Måløy. At about 1700, an inn and trading post were established here.

With its central location in the shipping lane in relation to the fishing grounds off Bremangerlandet and Vågsøy, it was only natural that a trading post and an inn should be established on the island of Måløyna.

It was the trading citizens at Vågsberget who for many years owned and ran the business activities at Måløyna. In 1636, Didrik Fester came to Vågsberget and established a trading post and an inn. In 1702, Fester's daughter-in-law, Karen Rafn Fester, was granted the privilege of running an inn at Måløyna. When King Fredrik IV passed the place on 21 July, 1704, she had the honour of being hostess to the royal entourage. The Fester family ran Måløyna and Vågsberget in a joint operation until 1744.

Modesta A. Fester, Karen Rafn Fester's daughter, took over all the business activities that her mother had owned. She employed people to run the business at Måløyna, providing it with supplies from her business at Vågsberget. In 1742, when Modesta D. Fester owned the place, Måløyna was referred to as an ancient privileged trading post, and a vital institution for travellers as well as for the general public. The place was said to have a sheltered harbour, which made it a convenient stopping place for "jekts" from Nordfjord and Sunnmøre. In addition, Måløyna was an important posting station.

It was Modesta's sister, Karen Kristine, who inherited the place after her mother. In 1744, she took over the business activities at Måløyna, and from now on it was run as an independent operation. She married Peder Moldøe, who was probably the business manager for Modesta Fester. He died in 1744, and the trading privilege was then transferred to her. The following year, she remarried, and her new husband, Peder E. Glad took over the business in 1746. He was granted a royal privilege to operate an inn, do fish trading, and run a general store. On the other hand, he was not allowed to sell tobacco, beer, and liquor. This made it much more difficult for the owner to compete with the tradesmen at Vågsberget and Osmundsvåg.

When Peder Tonning bought Vågsberget in 1770, there was no longer any family connection between the owners there and those who ran Måløyna. The competition between these two places was intensified.

In 1773, Peder Glad was granted permission to sell beer, liquor, and tobacco at "Wogsøe Klippe". In fact, this permission was meant to be used at Raudeberghaugen on the point of Kapellneset, on a site he had leased. Trading took place on Sundays and other holidays when people went to church, or when there were weddings and funerals. This trade was not well received by many locals in the area because it led to much drunkenness and many accidents. In 1779, both Glad and Tonning had to appear in court to report their trading privileges. From now on, Glad was only allowed to run his business according to the permission he had had at Måløyna. For a while he also served as a master of the pilot guild for the western part of Nordfjord. Glad died in 1798, and his widow took over the business.
In the 1801 census, Karen Christine Glad was an 82-year-old housewife, tradesman, and innkeeper at Måløyna. She lived together with her unmarried daughter, Modesta, 51 years of age. Besides, there were six servants, including two enlisted sailors. There is reason to believe that it was actually Modesta Glad who ran the place in her mother's name.

It was Erik Andreas Friis, son of Glad's daughter, who in 1805 was given the deed for Måløyna. His father was Thomas Friis, the innkeeper at Rugsund.

In 1824, Peder Martin Knoph bought the trading post at Måløyna and the same year he also got the royal privilege to run a general store and an inn. Knoph ran the business until 1837, when he sold the place and moved to the farm of Bortnen in the Davik parish.

The turn had now come to Johan Petter Schmidt from Bergen to take over as owner of Måløyna. However, after only one year he transferred the deed on the property to his son. In 1848, Ole Schmidt got a new permission to run a store and an inn there. In addition, he owned parts of a number of other farms. It was Ole Schmidt who built the beautiful and elegant buildings standing at Måløyna until Christmas, 1941. The style was typical of the distinguished trading posts along the Norwegian coast at that time, consisting of an impressive main building, servants' quarters, outbuildings and warehouses encircling the court yard. The servants' house was allegedly built of the timber from the old Røysa church which was torn down in 1854. For many years the church bell served as a bell on the storage house at Måløyna.

In 1866, Henrik Chr. Friis bought both the trading post at Måløyna and the farm of Blesrøyr from Schmidt. He also took over the job as postmaster. The first steamers had called at Sæteneset, but in 1883, the port of call was moved to Måløyna. Besides being a tradesman and a postmaster, Henrik Friis was also a shipping agent and lived at Måløyna, and that was the reason why the port of call was moved there. The local council objected to the move, and in 1890, it was moved across the strait to the Vågsøy side.

In operation until December, 1941

Friis ran the trading post until 1902, when the bailiff Nils Lem in Sogndal bought Måløyna. When he was younger, Lem had worked as a shop assistant for Ole Scmidt at Måløyna. He let his nephew Arnoldus Lem run the business during the first few years. About 1910, the tradesman Trovik bought the trading post, but he sold it Leif Grøner and the brothers Audun and Einar Lem in 1915. These three men in turn sold the business to AS Johan Martens & Co. (Ltd) in Bergen, but were given shares in the company. Einar Lem was manager of the business activities at Måløyna. The export of herring, fish, cod-liver oil and roe constituted the main activities of the company. In 1921, the company was closed down.

The brothers Audun and Einar Lem - joined by Jacob Kjøde - established the company AS Einar Lem (Ltd) and continued in the same line as the previous company. They also had an oil and petrol station there. During an allied military action, called the Måløy raid, all the houses on the small island were blown up and burned to the ground. They were never rebuilt.

The trading post and the inn no longer exist. Today Måløyna is part of the harbour facilities of the town of Måløy. In 1974, a new bridge was built to span the strait of Ulvesundet. The many bridge piers based on the small island of Måløyna now totally dominate the site of the old trading post.

The new town of Måløy on the island of Vågsøy has been - and still is - one of the country's biggest and most important harbours within the fishing industry. Huge quantities of fish are exported every year. But - it was on the small island in the strait of Ulvesundet where it all started.

Note:The author has chosen to use the place name Måløyna in order to distinguish it from the present town of Måløy.

Måløyna with the trading post furthest to the left. The warehouse furthest to the left was called 'Nore bod' (the northern warehouse). Further to the right in the cluster of buildings is 'Søre Bod' (the southern warehouse). Between them are the residence, the servants' quarters and the boathouse.
Owner: I <i>Handels- og gjestgiversteder på Vestlandet.</i> - Date: Ukjend. - Photographer: Ukjend.
I <i>Handels- og gjestgiversteder på Vestlandet.</i>
Ukjend.
Ukjend.