The old trading post of Rugsund is located in a beautiful natural setting on the eastern tip of the island of Rugsundøy. Rugsund, the strait between the island of Rugsund and the mainland, is the shortest way to Nordfjord when you sail from the south into the sea of Frøysjøen. In the strait there are two islands - Storøyna and Litleøya (literally the big and the small island) - which provide shelter for the old trading post. Rugsund is also the name of the church "sokn" the place belongs to, in the Davik parish in the municipality of Bremanger. 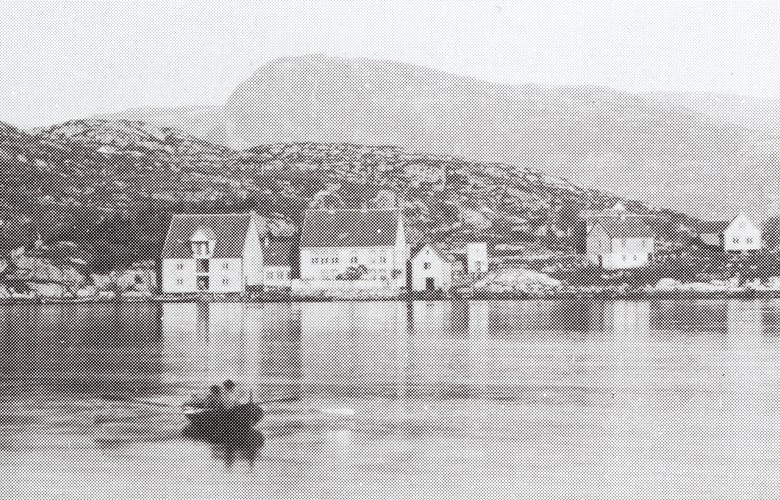 Rugsund in the 1880s. The warehouse, the store, and the residence in the centre of the picture. To the right of these buildings, a short distance from the sea, is the bakery. The bakery was in the cellar of this building, whereas the ground floor was used as a court room for some time. At present the bakery is used for accommodation.

The sheltered harbour was very popular among seafarers as it was centrally located by the inner shipping lane along the coast. The trading history of Rugsund dates back to the early 17th century, when some Bergen citizens settled down there. In 1757, Thomas Friis owned the inn and the trading privilege. In his days the place was referred to as being important both for travellers and the general public. Without any doubt this was the most important posting station and harbour for "jekts" and other boats in the entire region of Nordfjord. The income from the trading post was particularly good because most people went to Bergen themselves to buy the wares they needed. The most important source of income was the inn.

In the mid-19th century, the trading post of Rugsund experienced good times. Henrik Didrik Friis turned the place into a substantial business. In 1865, Thomas Friis was the shopkeeper at Rugsund. His shop assistant was Peder Christensen. In his employment he also had a housekeeper, three male servants and four maids. The Friis family owned Rugsund from the early 18th century until 1893, when Peter Christian Wiese took over the business. Wiese, who had worked as a shopkeeper at Dombstein, ran a village shop (a general store), a draper's (dry goods shop) and a grocery's shop. His son, Helmfred, worked as his assistant. A baker's apprentice was also in his employment, so there must have been a bakery on the premises as well. One of the buildings is in fact called the Bakery hall. Wiese ran shops both at Rugsund and Vågsvåg until 1916, when he sold both places and moved to Bergen.

Port of call for steamers

As early as the 1850s, Rugsund had been included as a port of call for some of the postal routes between Bergen and Trondheim operated with steamers. The place enjoyed a long history of having a good harbour and a trading post, and was a natural choice for a port of call. However, the local steamship company called "Fylkesbaatane" did not include Rugsund when they organized their first schedules for the regular routes to Nordfjord. The businessman Friis applied to the municipal council to make Rugsund a regular stop on the steamer routes, offering to work free of charge as a shipping agent for six months to get what he wanted. In the 1860s, steamers serviced the place and in 1870, it was included in the schedules as a so-called *stop (stop when there were passengers and goods to or from the place). Both routes to Bergen and local routes called the place. The shopkeeper Thomas Friis was the first shipping agent at Rugsund in the 1880s.

Over to the mainland

In 1897, plans were made to build a quay at Rugsund, but people on the mainland side fought hard to move the shipping agency to their side of the strait. They wanted to build a quay at Haugland. After some years they succeeded and a quay was constructed at Haugland about 1919. The same year Alfred Haugland was employed as a shipping agent. With his partners John Fløtre and Karl Haugland he had also been in charge of building the quay. These two were shopkeepers. Karl Haugland's shop was started by his father, Jesper G. Klubben, in 1885. Karl took over the management of the business in 1905 and added a bakery to his business activities in 1908. John Fløtre's village shop (general store) was started by his father, Lars J. Fløtre, in 1886. In addition to running a grocery's shop, Fløtre also sold fish and meat. In the 1950s, Fløtre was a shipping agent for the local steamship company "Fylkesbaatane".

In 1916, Harald Skaar bought the old Rugsund trading post from Wiese. In addition to the village shop, Skaar also traded in herring and fish, ran a saw mill, a timber trade, and a factory for producing boxes and cases.. Skaar salted herring and fish and delivered raw materials to the canning industry. In the same year as he took over the business, he built a steam boiler for producing cod-liver oil, and in 1925 he built a new warehouse, an icehouse and a new saw mill. At the same time he started trading in timber and building materials. There were also facilities for drying fishing nets, and a bunker station for fuel oil. The place was ideally located for fishing boats and freighters passing through the strait of Rugsundet on their way to and from Nordfjord.

The big residence is said to have been moved to Rugsund in 1836. A new floor was added to the house, and at the same time a warehouse and a general store were built. At present there are two big warehouses, one with its gable facing the sea, and the other with its long wall towards the sea. The shop is situated between one of the warehouses and the residence. Behind the residence is a storehouse, and further to the north, the bakery, which has also functioned as a residence.
On 27 February, 1924, the trading post was listed by the Directorate for Cultural Heritage. Since then the buildings have been restored and are now in good condition.

There is still a general store at Rugsund - "Harald Skaar landhandel" - run in the old original style with trade across the counter. The place also caters for leisure-boat tourism, with a guest harbour and service facilities. Houses and rooms can be rented, and there is even a place for pitching a tent or two. The buildings called "Bakeriet", "Mjølloftet", "Svaloftet" and "Butikkloftet" provide accommodation for tourists. A scuba-diving service centre has been established at Rugsund in a big warehouse where it is also possible to rent boats. The conditions for scuba diving are said to be excellent. From Rugsund there are many marked trails to other parts of the island. The place is also a good starting-point for climbing the Hornelen mountain and for outings to the rock-carving site at Vingen.

The future prospects for the old trading post of Rugsund look bright. In 2000, construction was started on a new road connecting the mainland to Bremangerlandet. This road project includes a new bridge across the strait of Rugsundet, a new road and tunnel crossing the island of Rugsundøy, and a new tunnel - the first of its kind in this county - under the shipping lane of Skatestraumen to Bremangerlandet. On 12 July, 2002, this new road project was opened for traffic, and the trading post of Rugsund is now connected to the mainland.

For a very long time Rugsund has been used as a much used harbour for 'jekts' and also as an inn. The picture shows the place on a fine summer's day in the 1990s. The store can be seen between the white residence and the warehouse to the left.
Owner: Fylkesarkivet i Sogn og Fjordane. - Date: 1990-talet. - Photographer: Ukjend.
Fylkesarkivet i Sogn og Fjordane.
1990-talet.
Ukjend.

Many leisure boat tourists make a stop at Rugsund. There they find a nice guest marina and service facilities. An old country store is still in use. Accommodation can be found in many of the old and listed buildings.
Owner: Rugsund handel. - Date: kring 2000. - Photographer: Rune Sunde.
Rugsund handel.
kring 2000.
Rune Sunde.

The Rugsund store is 'squeezed in' between one of the warehouses and the residence. Here customers can buy groceries, fishing tackle, lubricants, souvenirs, and misc. articles. Just like in the good old days, trading takes place across the counter.
Owner: Rugsund handel. - Date: kring 2000. - Photographer: Rune Sunde.
Rugsund handel.
kring 2000.
Rune Sunde.