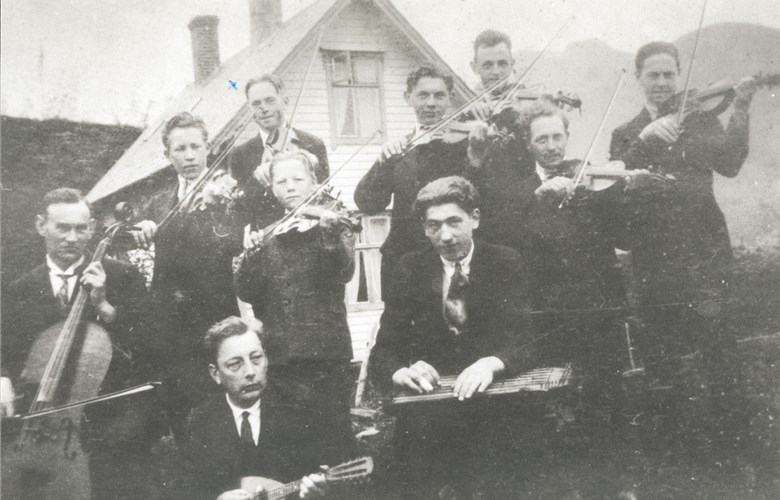 The memorial stone for Sigurd Fossen is located on his grave on the north side of the Holmedal church. The stone is made of a dark rock, about 150 centimetres high, 60 centimetres wide, and 20 centimetres deep. The front side has been polished, and the inscription is made against a white background. Below a cross at the top is inscribed: SIGURD FOSSEN * [f.] 18-8-1906 * [d.] 3-7-1935 * Mat.5.6 * Reist i takksemd * av Holmedal songlag (SIGURD FOSSEN born 18 August 1906 died 3 July 1935 Matthew 5,6 Erected in gratitude by Holmedal Choir Association)
Note: Matthew. 5,6. says: "Blessed are they which do hunger and thirst after righteousness: for they shall be filled."

Sigurd Fossen, born at Solheim in Jølster on 18 August 1906, was the son of the teacher and parish clerk Anders Andersson Fossen, born in 1855 at Ormberg in Jostedal, and Kristina Sjursdotter Ålhus (1874-1918). Fossen went to the one-year teaching seminar at Balestrand in 1875-1876, and to Hamar teachers' training school in 1882-1884. He was a teacher at Jostedal in the period 1877-1895, a teacher and parish clerk in Gaular, (Bygstad), 1895-1898, and a teacher and parish clerk in Jølster (Ålhus) from 1898, until he retired as a teacher in 1923. That same year he moved with his family to Holmedal, and settled on the smallholding of Kroken, or "Utsikten" (the view), under the farm of Holmedal.
Anders Fossen was married three times, the second time with Kristina Ålhus. They had six children, Sigurd being number two. Kristina died in childbed.

Sigurd was 17 when he, together with his father, his stepmother Nikolina, and brothers and sisters came to Holmedal. Sigurd gave a helping hand at the smallholding, which was big enough to feed 2-3 cows, and he built a small house, where he had a carpenter's workshop. When his father died, Nikolina moved in, and they both lived there until Sigurd died after a stomach operation, on 3 July 1935, only 30 years old.

In 1926, there was a music course at Holmedal, in which Sigurd and several others participated. Afterwards, Sigurd became the leader of 12-15 young people who came together regularly to play and to practise. In this way the Holmedal Music Association started, - first with fiddles and accordion, later with cello, organ, mandolin, and flute. "He was a very good teacher," said Jostein Haaland, Holmedal, who went to a course by Fossen when he was eleven.
In 1931 or 1932, there was another course with a visiting teacher whose name was Smilden, from Hyllestad. The music association gradually reached a level high enough to travel around and give concerts - at Hyllestad and Solund, Dale, Sande, Førde, and Jølster.
Sigurd Fossen also managed to get a male choir started, where he was the conductor. Sigurd did great and valuable work for the choir and music activities at Holmedal in the short time he lived.

After Sigurd Fossen passed away, others took over the leadership of the two associations. The music association was active until 1940, the last few years led by Andreas Fossen, Sigurd's brother. Hjalmar Rivedal, a young, interested singer and fiddle player, took over the leadership of the male choir. With short interruptions this choir was active until the mid-1950s, when the Holmedal mixed choir and the Holmedal male choir from 1955 merged into Holmedal Songlag.

The memorial stone for Sigurd Fossen stands on his grave in the churchyard at Holmedal. Holmedal Songlag (choir) had the stone erected in gratitude for the work he did for the choir and music life in the community.
Owner: Fylkesarkivet i Sogn og Fjordane. - Date: 2001. - Photographer: Hermund Kleppa.
Fylkesarkivet i Sogn og Fjordane.
2001.
Hermund Kleppa.