Totland-Deknepollen was the last remaining distance before there was a continuous road between Måløy and Oppland across the mountain pass of Strynefjellet. The first allocation came in 1938, but it was the Germans who were in charge of the road construction during the war. About this road it was later said: "The road construction shows how it is possible in a difficult and expensive terrain and with modest demands as to the road standard and equipment to build a road, which according to Norwegian standards was highly suitable". 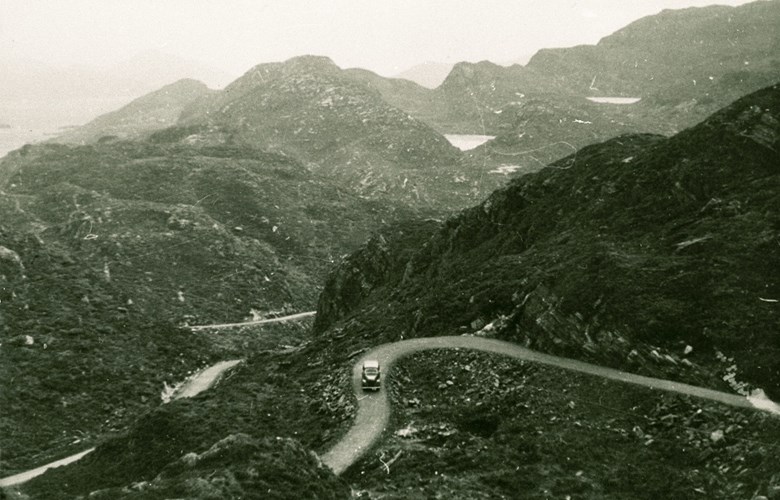 The road across Almenningsfjellet the way the Germans built it during the war. The road was narrow, winding, and steep. The Germans wanted to get quickly out to ice-free harbours and had no time to wait for the planned tunnel.

In 1926, the municipalities of Eid, Selje, Davik, Nord- and Sør-Vågsøy had reached an agreement that they wanted to prioritize a road to Måløy (Kulen). In the same year, Sør-Vågsøy wanted to advance means to build a road from Deknepollen to Kulen and to the boundary of Davik (to the west of Almenning), but the county was unwilling to allocate the money needed. Only in 1937, was Totland-Måløy included in the budget proposal for 1938-39. This was a distance of 18.3 kilometres, and the construction work started the very same year. However, the allocations were insufficient, and there was not much progress.

The Germans took over

The German occupation forces looked upon this road as strategically important, and the construction work was therefore given extraordinary means. The road was included in the list called "particularly important and urgent tasks for the society". The reason was the location of Måløy on the coast with its substantial defence facilities that were obvious military targets. If there was an attack on Måløy, the Germans wanted to have their backs covered and retreat eastward along the road. The occupation forces also speeded up other strategically important roads such as Førde-Florø, Årdalstangen-Øvre Årdal and improvements across the mountain pass of Filefjell.

The Måløy raid speeded up the road construction

It turned out that the Germans had every reason to look upon the road as particularly important. On 27 December 1941, allied forces attacked Måløy. It was the British-Norwegian landing forces - including the "Kompani Linge" that struck. Vital facilities were destroyed and German prisoners and high-ranking members of the Norwegian Nazi-friendly party - NS - were taken to England.

It was not easy to get hold of workers to speed up the road construction. Not even increased advance payment helped. Many of the workers were farmers who had to go home to do harvest work, or fishermen who took part in the seasonal fisheries. Most workers came from the neighbouring areas, from Gloppen, Breim, Stryn, Hornindal and Eid. In 1942, new orders were given to transfer workers to the Årdalstangen-Øvre Årdal road, but this road project was also short of workers from time to time. As the road was so vital to the Germans, they transferred people by force. 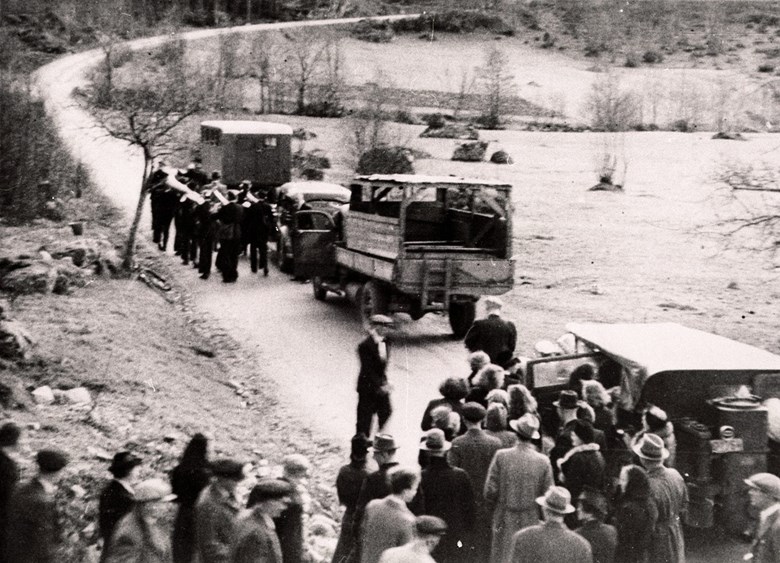 Road construction was hard work, both physically and mentally. One of the problems for the workers was lack of food. Going home was therefore important for them. Every other week they were allowed to go home on Friday. They used these trips home to stock up on provisions. The food they got was mostly potatoes and clipfish with coffee surrogate (Rika) as dessert. Everything else they had to provide themselves. Those who came from Eid usually went home every weekend. Those who came from Hornindal and Stryn could go home every other weekend. The workers from Gloppen and Breim were allowed to go home every four weekends. Expectations ran high when those who had been home returned by boat. What kind of food had they been able to get? Did they get any meat?

The potato pancakes saved them through the war

The potato pancakes were very popular, and the bread rations were so small that the potato pancakes saved them through the war at the construction site, in addition to homegrown tobacco. Going home could be a strenuous affair. First they had to take a boat from Skavøypollen to Rødegga. Then by lorry driven by wood gas generators. Going uphill, the speed slowed down, and if the hill was too steep, they had to jump off the lorry and push. On their return journey, they were frequently checked to see if they had any "illegal" goods.

The hygiene situation could be so-so. They washed once a day in a brook above the barrack entrance. They shared a towel and surrogate soap. Every other weekend, "Ola i Pollen" came on visit to tell news. Ola had a radio (which was illegal, of course). Everybody knew when Ola was expected and the room and the side room were filled with people. It was quiet when he was telling the news. Ola was captured by the Germans in the summer of 1944. He became a foreman for a group of workers at a road construction site, along with one of the high-ranking officials of the Public Roads Administration in Sogn og Fjordane.

The road to Deknepollen was completed in 1943/44. The standard, however, was not very good, to put it mildly. In order to get the road completed, the Germans had built the road across the mountain of Almenningfjellet instead of building a tunnel, because this would take a longer time. The road across the mountain was hardly drivable, so the tunnel work was started shortly after the war. In 1950, the 335-metre-long tunnel was opened for traffic. Most of the tunnel work was carried out without machines. All the rock from the tunnel was loaded by hand and transported in wheelbarrows and on carts.

Highway 15, as the road was called from the mid-1960s, was now continuous from Oppland to Ulvesundet.

The bus belonging to "Nordfjord og Sunnmøre Billag" on its way from Almenning to Eid. The bus was called "Reoen". The picture is taken east of Brunsvik at Rødegga. The new, but narrow and winding road was not at all suitable for car or bus traffic.
Owner: Fylkesarkivet. SFFf-1996054.0016 - Date: 1947 - Photographer: Ukjend
Fylkesarkivet. SFFf-1996054.0016
1947
Ukjend