Close to the road up to the Stavang church there is a memorial stone. The names of five men are carved into the more than two-metre-high stone. Three of these men lost their lives at sea, whereas two died in imprisonment in Germany. 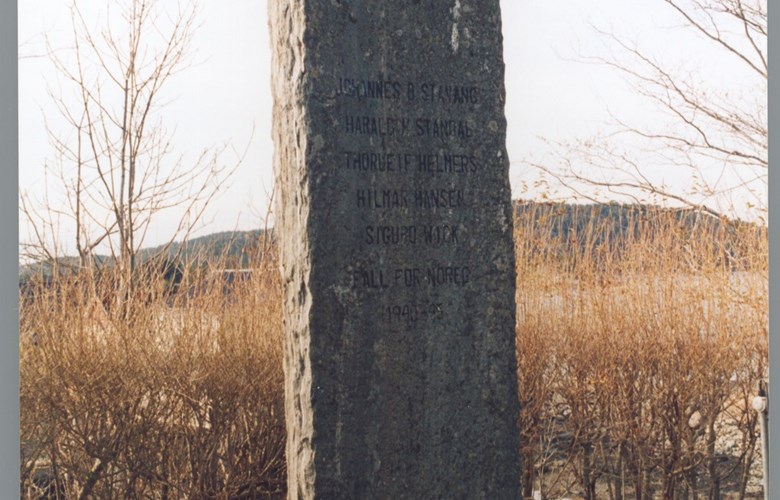 The memorial stone commemorating people from the former municipality of Bru who died during the Second World War is located on the churchyard at Stavang church.

The village erected the stone

Five persons from the former municipality of Bru lost their lievs during the Second World War. None of these were buried at their own homeplace. The work of raising a memorial stone to commemorate these five men was started just after the war ended, and the village people contributed generously to the project.

''Unveiling of memorial'', was an item on the programme for 17 May 1949. After the service, people gathered at the memorial. The curate Turvin gave the unveiling speech, and handed the stone over to the mayor Grønnevik. The mayor also gave a speech, and laid a wreath on behalf of the municipality. Relatives and others also laid wreaths. The Stavang choir sang two songs.

''The unveiling was a moving ceremony and many people attended,'' wrote the local paper Firdaposten in its 17 May report from Stavang.

Biographies in the book Våre falne

STAVANG, JOHANNES, engine assistant, Bru. Born 22 January 1908 at Kinn, son of Øystein Stavang, born 1875 same place, and Inger, née Apneseth, born 1876 at Vevring. Worked on MT Havbør, and died on 14 November 1940 when the ship was torpedoed between Cape Town and Freetown while trying to rescue the crew of another ship. 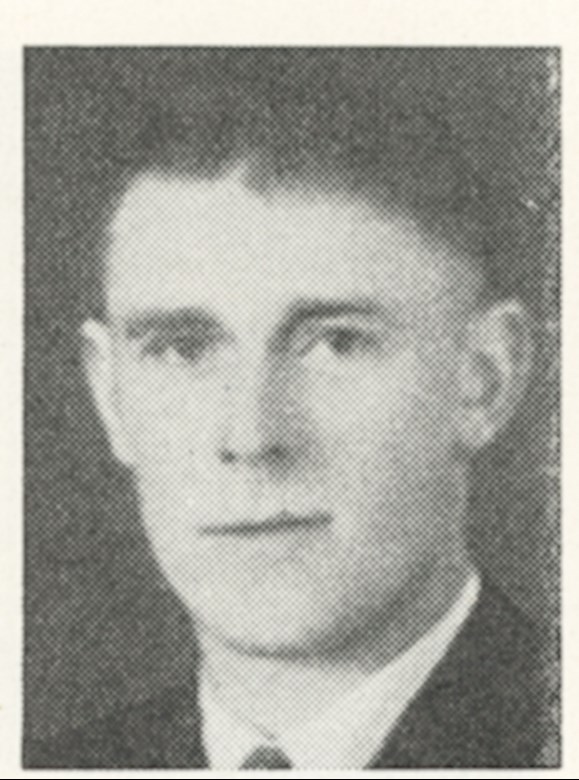 HELMERS, THORLEIF GARTNER, mate, Bergen. Born 1 May 1898 at Florø, son of Jens Bloch Helmers, born at Florø, and Constance née Gartner, born 1867 in Trondheim. Married 1939 to Ranveig Juell, born 1909 in Bergen. Middle school, School of Fine Arts in New York and San Francisco. Was a painter and had held an exhibition in Bergen. Sailed on allied ships and lost his life when ''Ramapo'' was shipwrecked on 14 February 1942.

HANSEN, HILMAR ANDREAS, fisherman, Bru. Born 24 October 1909 at Kinn, son of Hans Hallstensen, born at Solund, and Maren née Uføre, born 1881 at Kinn. Carpenter school. Had contact with English ships operating along the coast, and was captured by the Germans. Died at Vaihingen near Stuttgart on 21 November 1944.

WICK, SIGURD HILMAR, carpenter, Bergen. Born 7 September at Kinn, son of Henrik Wick, born 1883 same place, and Magda née Bjerke, born 1890 at Toten. Was active in the resistance movement, had a radio transmitter and smuggled arms. Was arrested on 25 February 1941 (the Alvær case), came to Bergen. Later to Grini, Åkebergveien, and in April 1942 sent to Sachsenhausen and NN camps. Died 16 December 1944 at Dachau. 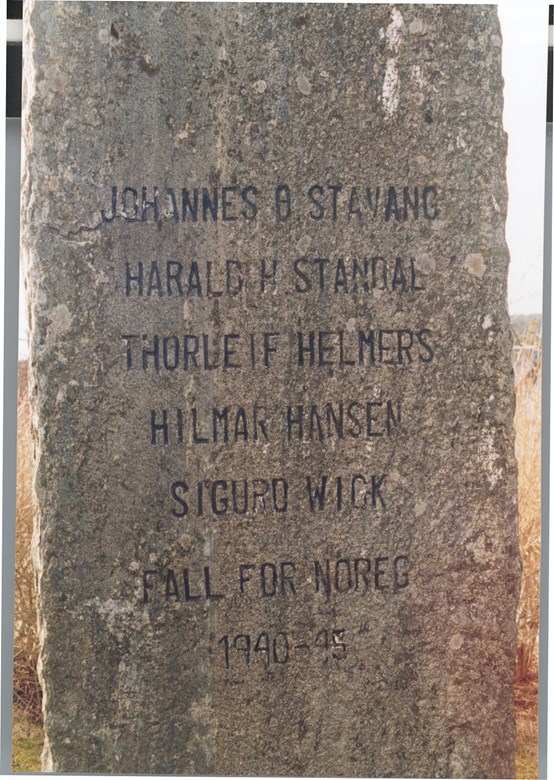 In the autumn of 1940, Johannes Stavang was a crewmember on MT ''Havbør''. The ship was torpedoed in the South Atlantic off Africa while trying to rescue survivors from another ship.

On 14 November 1940 SS ''Kohinur'' was torpedoed by a German submarine. 34 men managed to get away in one of the lifeboats, and 20-30 men got onboard three rafts. The rafts were observed the same day from ''Havbør'' where a lifeboat was launched immediately to try to save the survivors. When the rescue boat returned and people were being hoisted onboard, the ship was hit by a torpedo in the aft tank close to the lifeboat. The captain, 28 men of the crew and those they had rescued all died in the ensuing fire. Three Norwegians and two Danes managed to get away from the inferno, and four of them were found alive after drifting nine days at sea. 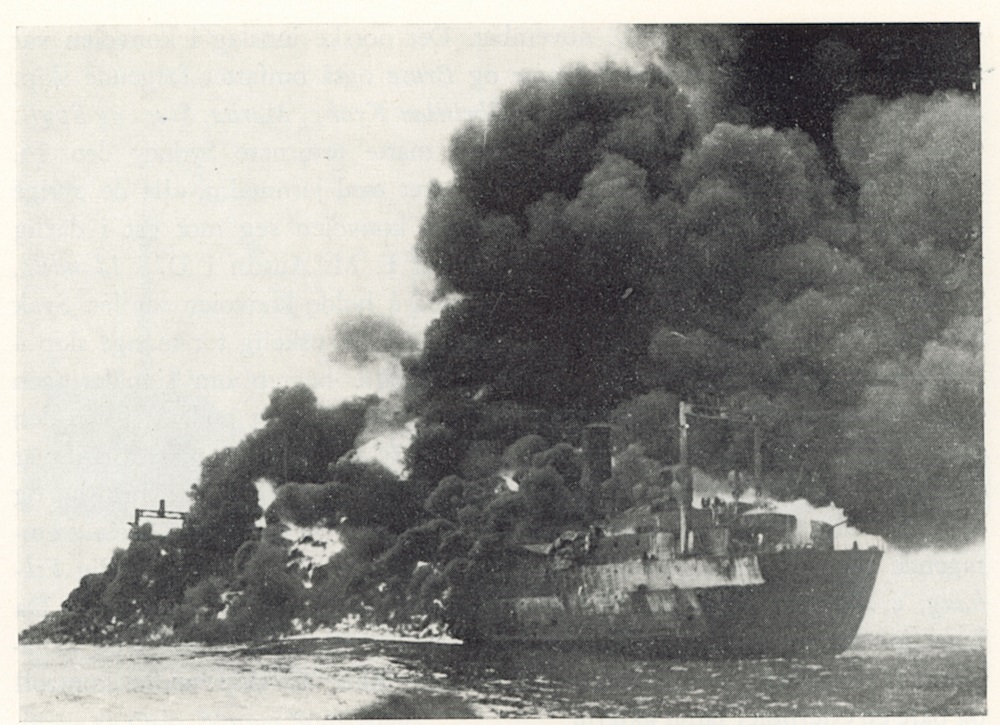 Sigurd Hilmar Wick was a member of the Alvær group. This was a major resistance group in Bergen named after Roald Alvær, journalist, 22 years old, and accused no. 1 in a comprehensive trial for the German War Tribunal in Berlin.

The group was disclosed and many were arrested. In April 1942, the prisoners were sent to Germany as NN prisoners. On 7 September 1942, 14 men were shot in Berlin and 20 others received long prison sentences.

NN prisoners (Nacht und Nebel - night and fog) were a category of prisoners who were sentenced by military tribunal in Germany. The prisoners were to be kept completely isolated, and nothing was to be made public of their sentences. The prisoners were meant to disappear into nacht und nebeland serve as a warning.

Approximately 1000 Norwegians became NN prisoners. Some 500 were sent to the prison camp Natzweiler where half of them died. Of the others about 400 prisoners belonged to the Bergen organization Stein.