Claus Frimann (1746-1829) was born at Selje. There he grew up as the eldest of four brothers at the vicarage. Poetry and preaching went hand in hand and were important ingredients in his life. He died at Davik after more than 50 years as a vicar for his people. 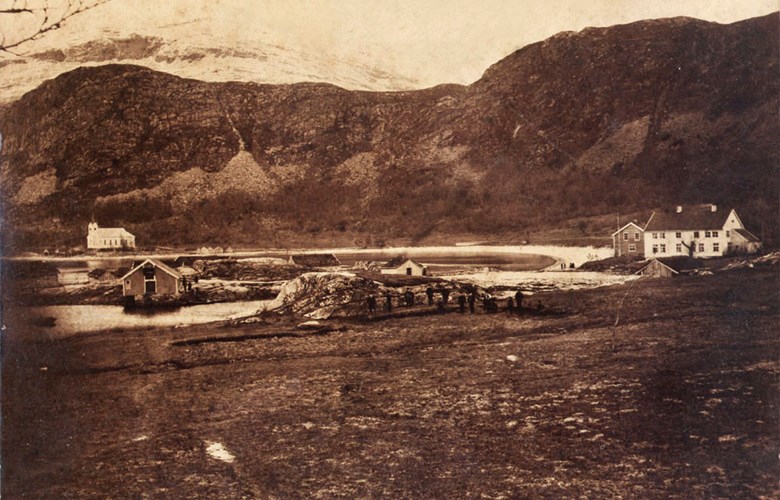 In these surroundings the poet vicar Claus Frimann was born in 1746 and this is where he grew up. As a young boy he used to play down at Nabben (to the left)- the present-day centre of Selje. Here he observed the fishermen on their way in and out of the bay of Prestevågen (to the left) with their boats. The warehouse called Frimannsbuda (to the left) still stands. The main residence at the vicarage (to the right) was built in the 1780s. Beyond the beach of Seljesanden is the Selje church built in 1866. The photo shows Selje about 1885.

In the northern part of Zealand in Denmark Claus Frimann found his sanctuary during his student years and also while he was waiting for the decision where to start his career as a clergyman. To this beautiful countryside near the "Esrum Sø" he sought refuge when Copenhagen with its intrusive urbane culture became too much for him. It was not obvious that Claus Frimann of Danish descent should feel at home in the metropolis. The Frimann family descends from Johan Frimann who came from Copenhagen to Bergen in 1660 as a property manager for Queen Sophie Amalie.

Under Indseiling igien til Norge (Approaching the shores of Norway)

Claus Frimann was ordained dean of Nordfjord on 6 December 1800. He was awarded the order of the Knight of Dannebrog on 28 January 1812. Late in life, he summed up his work as vicar at Davik where he had married 634 couples, baptized 2191 children and buried 1560 people.. 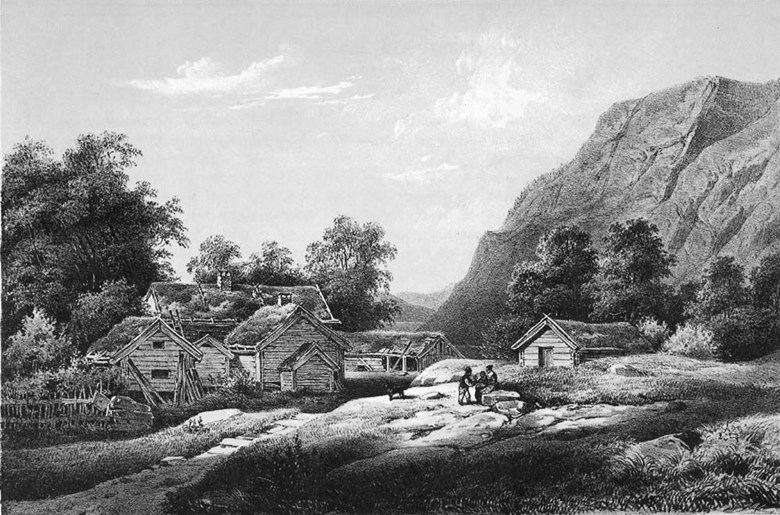 Already as a young man, Claus Frimann got the inspiration and encouragement for artistic expressions. Both his father, the vicar Peder Harboe Frimann (1713-1759) and his mother, Sara Cold (1714-1800), had artistic talents and understood the value of such interests. During his university days in Copenhagen, Claus Frimann was part of the circle around "Det Norske Selskab". He published books with poems and songs, hymns, devotionals, and fables. He is represented with a number of hymns in the hymn-book "Evangelisk-christelig Psalmebog" (1798). Three Frimann hymns are found in the present "Norsk Salmebok", admittedly partially rewritten. With the poem on the "bewitched mountain" called Hornelen he won a poetry competition organized by the "Selskabet til de skiønne og nyttige Videnskabers Forfremmelse" in 1777. Even today Claus Frimann and his brother Peder Harboe Frimann (1752-1839), who also had literary talent, are looked upon as important for the literary development in Denmark in the 18th century.

Claus Frimann's songs have been popular throughout the country up until the present time. We know this from the very many folk tunes linked to his lyrics. It is mostly the lyrics found in "Poetiske Arbeider"(Poetic Works from 1788), "Almuens Sanger" (Songs for the Common People from 1790) and "Den syngende Søemand" (The Singing Seaman from 1793) that have secured his popularity. When Frimann uses his knowledge of people in everyday situations, the lyrics came out good, too. A case in point is "Den norske Fisker" (The Norwegian Fisherman): "Harsh is the life of the fisherman,/Who has to turn out, before the crack of dawn,/work all day in ice-cold water,/Not think of home until the sun is down." In the song "Den rare Kone" (The Funny Wife) he describes in a humorous way what qualities he appreciates most in a wife: "The finest wife on the beach/Every evening I embrace;/If I were to exchange with my neighbour,/A fool would have been my name." In the fine songs "Saa knytter jeg Traad" (To tie a thread) and "Om godt Grandelag" (On good neighbourhood) there is much food for thought even to people in our own age.

It was far from easy for the general public to distinguish between Frimann's various roles. As vicar - on behalf of the King - almost reluctantly, he had to collect taxes and fees from people. At the same time, as a private person and landowner, he collected his taxes and fees as owner and part owner in various fisheries and properties. At his death, he owned 52 farms and properties throughout the northern area of western Norway. He did not like the inn close to the Rugsund church, especially when there were wedding parties. At Davik there was a tradition to shout and yell at the bridal couple. "This half Bacchanalian shouting and yelling is highly indecent, especially close to the church". For this reason, Frimann was not always on friendly terms with the local people. If we read the texts written by the poet vicar, we get an impression of him as the nature lover and the family father, but also an understanding of a man with a strong sense of justice and duty.

With a twinkle in his eye

But Frimann is also a humorist and uses irony in writing about the relationship between town and country and about the authorities. He liked a good repartee both by himself and from others. Hans Eirik Endal (1901-1992) from Davik told this story about Frimann: Frimann was a strict person and took great care to see that everybody did what they were supposed to do. One day he surprised the farmhand who was taking a rest: "Well, well, what do I see. Sitting here and doing nothing. If I come across you once more in a similar situation, I will certainly fire you!" However, the farmhand was not at a loss to find the right answer: "Work and rest belong to God, and God himself rested after his work of creation, and now I have just finished spreading manure!" Most likely Frimann himself appreciated this repartee.

Both Claus Frimann and his wife were buried at Davik. Their gravestones are located just inside the eastern churchyard wall. The pine trees are still there, although somewhat reduced, and a large liquor pot after him has been taken care of. His belongings were spread to the four winds during the 17-day-long auction in 1845. His book collection and most of his sermon manuscripts came to the Aarflot Museum at Ekset in Volda. In Volda Claus Frimann worked as a curate from 1769 to 1779 under the vicar Hans Strøm (1726-1797), and they were on friendly terms with Sivert Aarflot (1759-1817). Frimann lent money to the highly gifted young man so he could buy the Ekset farm. In 1797, Aarflot started a public library there, and in 1809 started up the first print shop outside the towns in Norway. Ivar Aasen (1813-1896) was a good friend of Sivert Aarflot's grandson with the same name. In his doctorate's thesis, Kaare Støylen writes about Claus Frimann: "Årflot carried the heritage from Strøm and Frimann further, and at Ekset the fruits of this humanistic effort were gathered. The traces lead even further, because it was there that Ivar Aasen was to receive his spiritual awakening."

A superstitious fellow human being

As a vicar and as a fellow human being, Claus Frimann was concerned about the well-being and welfare of the general public, but at the same time it was demanded of him to take care of enormous values, and he did not become popular when he had to collect taxes and fees from his hard-pressed subjects. A difficult task then, with obvious similarities to the present time. Perhaps this was the reason why he was so superstitious - he never ventured out in a boat without taking with him some beaver secretion (castor), in case he would have an encounter with the sea serpent!

In 1998, the folk music group "Frimann" released a CD with some of the lyrics of Claus Frimann to folk tunes from Western Norway. "Frimann" carried out a concert tour with the actor Toralv Maurstad in 1996 in connection with the 250th anniversary of the poet vicar. The painting on the CD cover shows Davik with Frimannslund and the old cruciform church from 1750 as the place looked like in Claus Frimann's time. The old church is no longer there. Frimannslund, The retirement residence that Frimann built at Lille-Davik 1808-1810, was moved to Stryn after it had served for a while as a boarding school for young girls. The "jekts" on the water could have been owned by Frimann. The Nordfjord Folkemuseum has in its collections an old boat ("vengbåt") that is said to have been used by Frimann. From references we can imagine what Frimann looked like, because a black silhouette made by Hans Leganger Reusch (1800-1854) is the only portrait we know of today.

The idyllic setting of Davik! On a hill just to the southeast of the Davik church stand the remains of the 11 pine trees that Claus Frimann planted in remembrance of the apostles. According to legend, Frimann did not want to include Judas. Another explanation is that the twelfth pine tree stands on the northern side of the Nordfjord. On 5 July 1936, the villagers raised a memorial stone on this site, dedicated to the memory of their poet vicar. The inscription is simple: "Claus Frimann 1746-1829" and a harp (on the north side) and "Erected 1936" (on the south side). Olaf Hanssen's speech at the unveiling ceremony of the memorial stone on that Sunday was broadcast all over the country. In the background we can see the Davik church, built in 1886.
Owner: Elin Grytting. - Date: Juni 1997. - Photographer: Elin Grytting.
Elin Grytting.
Juni 1997.
Elin Grytting.

The vicarage at Davik was built in 1741. This was the official residence of Claus Frimann from 1780 to 1823. The congregation had contributed to covering the expenses of the residence, "borgstova" (the servants' quarters) and the cowshed. The other houses - barn, stable, sheep shed, pigsty, "stabbur" (storage house for food), and "eldhus" (mainly used for cooking and washing)- belonged personally to the vicar. These houses had to be redeemed after an appraisal whenever a new vicar took over the property. Frimann built two houses used for lodgings, a mill, an outlying cow shed, and down by the sea a storage house for firewood and a sea warehouse. Drawing in "Norge fremstilt i tegninger", Chr. Tønsberg, Christiania 1848/Grøndal 1980. - Date: 1980. - Photographer: Teikning i "Norge fremstilt i tegninger", Chr.Tønsberg, Christiania 1848/Grøndal 1980.
1980.
Teikning i "Norge fremstilt i tegninger", Chr.Tønsberg, Christiania 1848/Grøndal 1980.

Claus Frimann made Davik greener. With the confirmation candidates he collected saplings of ash, elm, oak and pine and made a tree-lined road from the vicarage to the church. In the picture we can see Birger Indredavik (1901-1988) on his way to school through the birch-lined road about 1910-1912. To the right we can see the new vicarage built in 1901 that was destroyed by a fire in 1986. "In my mind I can see him wandering on the sloping fields surrounding his residence, amidst a growth of lush deciduous trees and flowering bushes". (Johan Sebastian Welhaven visited Frimann at the age of 75. In 1851, Welhaven published a book with a selection of Frimann texts, thinking it was a shame that this fine poet would be forgotten.)
Owner: Eldbjørg Skarstein/Fylkesarkivet SFFf-91027.0004. - Date: 1910-1912 - Photographer: M. E. Askeland.
Eldbjørg Skarstein/Fylkesarkivet SFFf-91027.0004.
1910-1912
M. E. Askeland.
resources:
Støylen, Kaare: Claus Frimann. Almuens Sanger. 1746-1829. J. W. Eides Forlag. Bergen 1955.
Grøndal, Leif Hoff: Claus Frimann. Liv og diktning inntil 1780. Hovedoppgåve 1927, UiO.
Grytting, Elin Pehrson: Frimanns rike, (bokmanus under arbeid).