The bailiff farm of Volden

The bailiff farm of Volden is the only residence for high-ranking public officials in Førde which is even today the residence of a public official. Now it is the vicar who lives here. The office building in the farmyard could be the very oldest house in the centre of Førde. Ten bailiffs resided at Volden from 1855 to 1971, and a well-known poet also lived there. 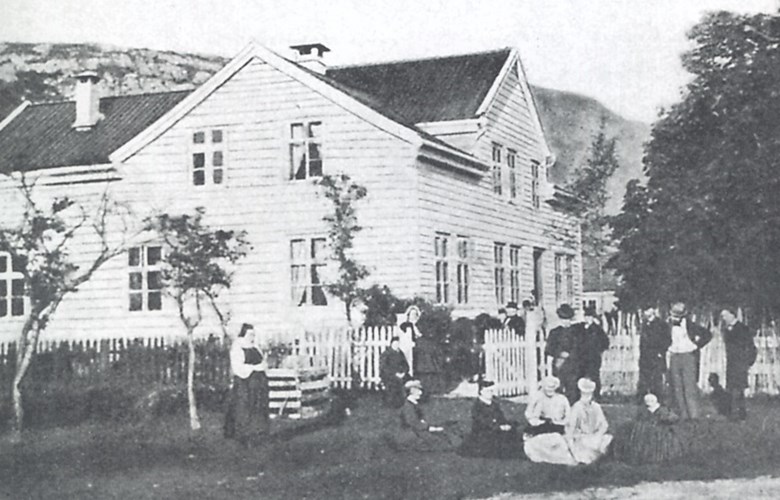 Volden in the 1860s, while the bailiff Christen Elster resided here. He made considerable extensions to the house.

Volden was separated from the property of Indre Skei in 1811, and housed military officers, and a lawyer, before the state in 1858 bought the property in order to use it as the residence for high-ranking public officials. This happened while Christen Elster was bailiff for the district of Sunnfjord. Elster was married to Elen Sophie Alstrup, and they had three children, one being the well-known poet and author Kristian Elster, the elder, who grew up here, and who described the atmosphere at Volden in several books.

At Elster's time social life at Tåene and Skei was animated and exciting, with close relations among several of the officials' families: "Bailiff Elster and his wife kept at Volden in Førde a hospitable, and by the standards of the rural Norwegian west, a relatively large house. In addition to the family, the household consisted of a manager and clerks, for a period a private tutor, a house maid, and servants (generally two male farm hands and three girls). And often there were guests who stayed for a short or a longer time, and there was frequent social intercourse with several families in the community (f. ex. the doctor Aabels)," Hjalmar Christensen writes. 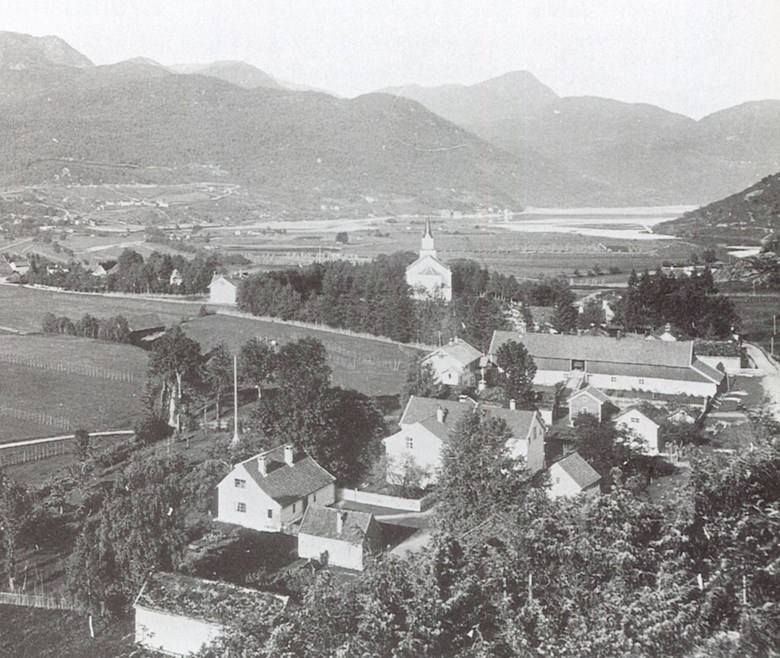 The main house at Volden dates back to the 1840s, but it was extended and renovated several times later. More interesting is the small office building in the yard, which Elster had moved here in 1855. This house could be the oldest in the centre of Førde, but it is not clear whether it dates back to the 17th century or the 18th. Proof of old age is f. ex. that the timber walls are planed by hand, not cut with saw or prepared with plane iron. Gerhard Fischer writes in Årbok for Fortidsminnesforeningen 1913 (the 1913 yearbook for the Society for the Preservation of Norwegian Ancient Monuments) that the building "has been used as a vicar's residence and is believed to have been located to the right of the alleyway leading up to the present main entrance. It is quite simple in outward appearance, but pleasant, and inside it has many fine details in the carpentry."

Volden was used as a bailiff residence until 1971, when the bailiff office was moved to the new post office building at the Langebrua (bridge across the river Jølstra). In 1986, the bailiff office was moved into the Hjelmelandsgården, a new office building on the south side of the river. The municipality took over the bailiff residence and turned it into a vicar residence. Anders Myklebust was in 1975 the first vicar to reside at Volden, and in 2001, vicar Sigurd Vengen lives here. The old house in the yard was used as an office for the church in Førde until 2001. Two other buildings in the yard, the carriage shed and the tenant's house,are now used by a kindergarten. 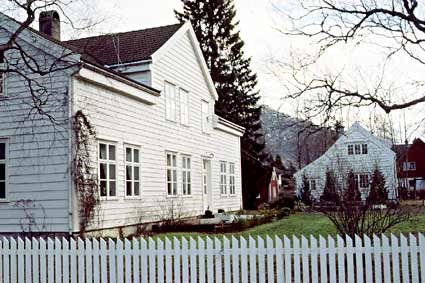 View of Skei around 1895. Nearest are the two farmyards at Indre Skei, the bailiff farm Volden, farm no. 24, and further toward the fjord farm no. 25 at Indre Skei. The old office building is in the yard to the left. At Tåene there are a number of houses reminding of the old Skei: Volden, Indre Skei, and the captain farm near the church. The old vicar residence is outside the picture to the left.
Owner: Biletsamlinga UBB. - Date: 1895. - Photographer: K. Knudsen.
Biletsamlinga UBB.
1895.
K. Knudsen.